Perhaps it is unfair to be skeptical of the announcement a few weeks ago by South Africa’s first black dollar billionaire, Patrice Motsepe, that he will donate half of the value of his family’s assets to charity under the guise of the Motsepe Family Foundation. The gesture – for want of a better word – is nothing to sneeze at: give or take a few hundred of million, the man is worth an estimated US$2.65 billion. The news, unfurled at capitalism’s annual backslapping extravaganza in Davos, took the South African press (and including those in foreign media) completely by surprise. The hacks had been speculating that his big announcement would entail the takeover of the morbid beast that is Independent News and Media (South Africa), one of the big media conglomerates in South Africa. (The company has been sold to Mandela’s former personal physician since.) The company is owned by Irishman Tony O’Reilly, who having downsized, tabloidized and juniorized its newsrooms within an inch of life, is cashing in and getting out before South Africa’s online media matures to hollow out his asset. Not surprisingly, the local media fawned over Motsepe’s decision, once it was out.

Samples from the weekly newspaper Mail & Guardian–not a friend of the country’s new black elites–here and here.

In part my skepticism stems from South Africa’s very recent past, a past in which our man is deeply implicated, a fact that has largely eluded the headline writers, but of which he would certainly be aware.

Motsepe was born into an upwardly mobile, petty bourgeois Soweto family, that succeeded despite Apartheid. He grew up learning the tricks of the business trade hawking booze to township mineworkers, and helping to manage the family’s Soweto spaza shop. Armed with intelligence and a law degree from the University of the Witwatersrand in Johannesburg he became, in 1994, the first black partner at the prestigious Johannesburg law firm, Bowman Gilfillin. In the same year he quit to become the owner-manager of a small mine contracting company, assiduously accruing profits and waiting for an opportunity to execute his big move.

In 1998 at the confluence of a strong Rand (the local currency) and low gold prices, he seized the initiative and acquired Anglo’s marginal mines at Orkney and Vaal Reefs on extremely favorable terms in a deal brokered by then Anglo CEO, Bobby Godsell. Having laid off 2500 workers–a third of the workforce at Orkney–the fledgling African Rainbow Minerals (ARM) saw the Rand tank and gold prices rise less than six months later, driven in part by a perceived increase in South African political risk (i.e. Thabo Mbeki).

In this ugly milieu, ARM thrived, paid off its debts, and Motsepe, well-placed to benefit from government policies requiring black shareholding in mining companies, began to expand his nascent empire. By 2002, the company listed on the 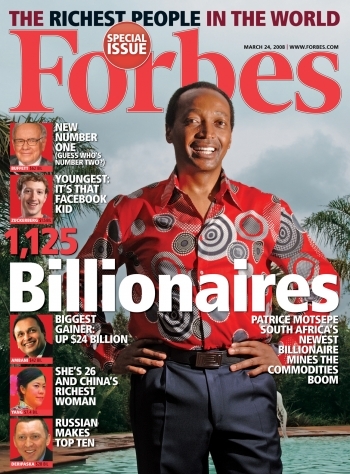 In August last year the twitching corpse of what had passed for South Africa’s post-apartheid “miracle” died under a fusillade of police bullets alongside 34 black miners at Marikana. The massacre triggered a wave of strikes across the gold, platinum, iron ore and coal sectors, which at its peak saw 140,000 mineworkers lay down tools to demand a living wage and improved workers’ rights. The reasons for the strikes are myriad and complex, but against a backdrop of growing inequality and unemployment, Marikana and its aftermath brought into stark relief the ongoing plight of poor black workers, the bloated paychecks of their paymasters, and the structural features of the South African economy that reproduce misery and indignity day after day, decade after decade.

Motsepe’s wealth has been built at the interstices of these realities. ARM owns 15% of Harmony Gold and Motsepe is its Chairperson. Harmony’s Kusasalethu mine, responsible for 14% of the company’s gold production, reopened this week following two months of suspended production due to union rivalry which has left two workers dead, strikes, and a spate of underground sit-ins that crippled production in the final quarter of 2012. The company has locked out workers, some of whom were forced to sleep at its gates, and initiated section 189 proceeding to retrench 6000 workers. The Modikwa platinum mine, 41% owned by ARM, saw production suspended for 5 weeks in 2012 due to strike action. Motsepe is not immune to the labor relations landscape, and in 2012 was the Congress of South African Trade Unions’ (COSATU) largest private benefactor.

Motsepe may have been moved by the (momentary) bad press leveled at fellow black multi-millionaire, Cyril Ramaphosa, in the wake of the massacre at Marikana. Unsurprisingly, big black business has not demonstrated itself to be significantly different in practice to white big business – their practices suggest more continuities with apartheid inheritance (inequality, excess, etcetera) than change.

Is this Motsepe’s time to become a philanthropist to protect himself?

The best riposte to Motsepe’s sudden sense of altruism was actually published in a letter to the selfsame Mail & Guardian by a reader Jeff Rudin, who some readers may remember as a researcher at research institute in Cape Town:

It’s a strange world we live in. Even Alice in her Wonderland would probably be taken aback by the [media coverage of] Patrice Motsepe’s intention to give away half of his income. Left entirely unasked, however, is how the mining magnate amassed a net fortune of more than R20-billion and, moreover, did so in less than 20 years, from his humble beginnings as a (would-be) capitalist who had no capital.

The poverty of mineworkers – now exemplified by the Marikana massacre – sits grotesquely alongside the mountain of Motsepe’s wealth. Congratulating him for his generosity is like thanking someone who, having helped himself to your bank balance, your house and its entire contents, has the charitable compassion to buy you a second-hand bed for the shack you and your family are now forced to occupy.

This is not to deny that Motsepe is at least a bit different from other obscenely rich mining magnates. My focus is not on Motsepe the individual but rather on our dominant values. What sort of society fails to ask how an individual can possibly spend R20-billion? What sort of society applauds the Motsepes of the world while condemning mineworkers for their “greed” and lack of “patriotism” when they demand a living wage?