Dreams brought us here and we arrived
With no enthusiasm for things stirring
Currents, currencies – concurrently drift us
Into adamance, but we learnt before to be.

Lagos: the Nigerian coastal city is shriveled up by growing population; each new government seeks newer ways to expand the territory. The current governor started by clearing illegal structures and refuse dumps. It is difficult to believe that there was a time when Lagos was largely a scenery of garbage heaped so high that some mistook it for mountains waiting for climbers. Before long, many inhabitants of the city welcomed the initiation of “a new Lagos”, where the streets are cleaner, and cleaners in uniform sweep away dirt at intervals—a city which deserves the tagline: City of Excellence. Lagos is still not too clean, yet the ‘visible’ change and immersive Public Relations of Governor Raji Fashola’s first term in office has helped inhabitants to see the place differently, especially with the I see Lagos adverts. Fashola’s goodwill has been rising, until just recently, when it sunk a few meters below sea level with the demolition of some parts of Makoko, a pile dwelling that has existed for over 200 years.

Two years ago, the BBC shot a documentary, Welcome to Lagos, which generated many debates, and brought more pilgrimages to Makoko than it had ever received in the past. It seemed not to be the type of imagery the state government wanted amid its efforts to attract tourism and investments, and though it took 48 months to issue a 72-hours quit notice to the inhabitants of Makoko in July, it was issued.

This demolition has generated a wide response, for and against. Support for the destruction of the place is mostly from those who have bought into Fashola’s vision of the New Lagos, while those against are of two types: those who are concerned about the lack of alternate residences, and those who are looking at the cultural ecology and history of Makoko’s people. Sadly, most media descriptions have looked at Makoko—which has over 100, 000 residents—as a shanty. There’s more to it. This is the destruction of a community. 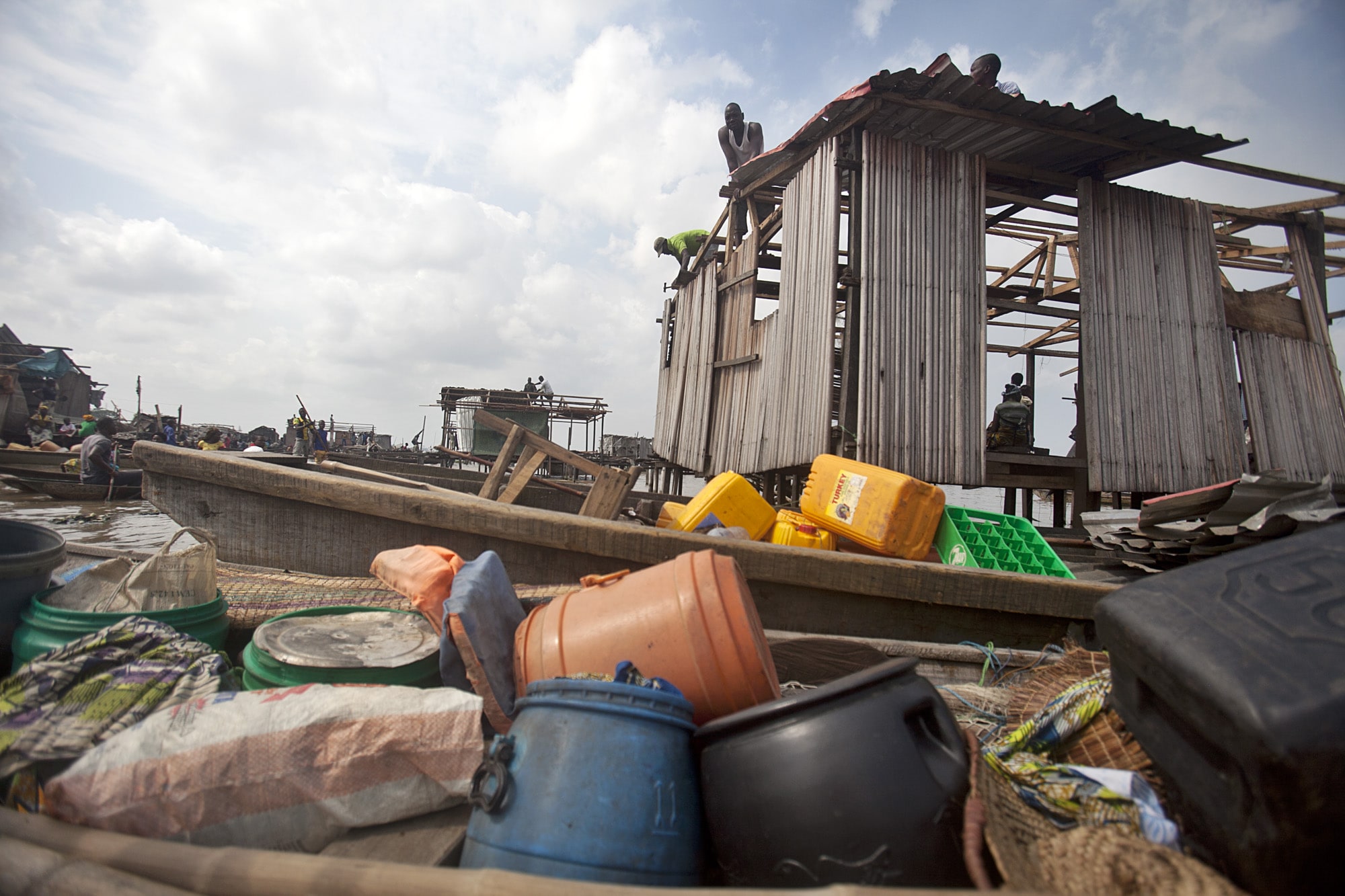 After today we shall berth, in a row
Unlike other days our boats floating in semblance
We will haul desires to shores,
Perhaps come back with everywhere on our minds
With power in our loins, we’ll find repose in luck.

Driving across the bridge, on Third Mainland, one would see the rows of boxes, lumbers floating on the waters and sometimes fishermen in their canoes slipping past. While the scenery can be beautiful as the sun sets, the area still does not represent the ideal home for many Lagosians because it is figured as a place for a particular people—the Ilaje, the Ijebu, the Egun, who history favours as those who live close to water. The government has remained obstinate about its position on demolition, saying that the people should place their trust in government, “rather than any other person”, and that the demolition is best for them, as it will protect them from those who extort money on their behalf. There appears to be something personal about Governor Fashola’s accusation. Who are those extorting money from the residents of Makoko?

Even if the governor has this knowledge, he is more comfortable with knowing the settlement as a hideout for immigrants arrived from Cameroon, Benin and Togo without papers, which would be an argument against city districts anywhere across the world. But Makoko comes with a different story. It is interesting that over four different languages are spoken in the locale, principally Egun, Ijaw, Ilaje, Yoruba, the lingua franca, and some sub-groups. Neighbours may not even speak the same language, yet co-existence is cordial. Some of the inhabitants have never left the waters, so their total life experience is involved in the mundane activities peculiar to the place: fishing, logging, and perhaps television. The only school in Makoko was instituted by an inhabitant who returned to start one.

For an area with a pile-dwelling population that now numbers over a hundred thousand to have lurked for two centuries within a state, is without doubt a significant oversight. The absence of basic infrastructure like schools means it has never been a part of the state in the actual sense. It was just a kind of self-sufficient extra area bordering the city, until foreigners took note of it, and gave it media attention. It may not be wrong to think that the government’s lack of concern over this environment has quickened its degradation, and that is what is being said between the lines: Makoko has been denied infrastructural facilities because it is not official. Preserving the identity of a people is as important as the social amenities, and it appears the government believes the residents of Makoko lack one.

Knowing that the residents of Makoko voted in the last election, it is merely fair that Governor Fashola should use this crisis to create an “official” Lagos which accommodates a more diverse range of conditions, a Lagos that genuinely caters for the varied class structure occupying the state at this time. The diversity of Lagos should be put into the plans of his proclaimed “mega city” architecture, or else the excellence he seeks will become another social-class illusion that is informed by Western values. One major eviction that got as much attention as this was the clearing of Maroko in 1985 by Colonel Raji Rasaki, then governor of the state. Rasaki claimed to have an alternative involving resettlement plans for the inhabitants, but these plans only reached a very few. The court case over the clearance of Maroko is still open against the government.

Raji is again in the news: a Raji Fashola this time, on another destruction assignment and he has chosen a name close to his namesake’s: Makoko!

Instead of voting for the bankrupt ANC or DA, South Africans could do better with social movement candidates in upcoming local elections.

The New Apartheid, a new book by Sizwe Mpofu-Walsh, seeks to define a generational mission in South Africa. Instead, it shrouds our existing one in complete opacity.

This week on AIAC Talk we discuss the start of Thomas Sankara’s assassination trial, which confirms that for many Burkinabes, his spirit very much lives on.

In contemporary Angola, the gap between the public discourse on culture and the on-the-ground reality of the arts and culture sector is deepening.

The class contradictions of scholar activism

The radical politics of the professional middle classes—too often found full of rhetoric, but short on action—are explored in Leo Zeilig’s new novel, The World Turned Upside Down.

If re-municipalization—returning a privatized service to local public control—is to work in South Africa, we need other forms of social contracting between municipalities and citizens.

In the collective consciousness of global football, Zaire and Haiti—which both qualified for the 1974 World Cup—are remembered for their dismal performance. But is this legacy justified?