The Italian photojournalist Michele Siblioni documents nightlife in Kampala, Uganda mostly in the neighborhoods of Kansanga and Bunga: Strip clubs, bars and sex workers are his main subjects. Siblioni’s website features a video in which one of the women he photographed shows him a tattoo with the words “fuck it sexy” written across her thigh alongside a penis and testicles. When Siblioni asks why she got the tattoo, she says she likes penises and sex. It is this type of back and forth between Siblioni and his models, that draws your attention to his exoticizing of black female sexuality.

The project is now a book, Fuck It. The centerpiece of the book is a cigarette-smoking black women. The effect: the real subject becomes the lens of the photographer himself.

There’s the image of a black woman with an ornamented ring as well as earrings. She is facing Siblioni’s camera at an angle, taking in a long drag of her cigarette. The photograph shows her fake nails, and we do not see her eyes or forehead, which is covered by a blurry finger. The image of women smoking cigarettes is one of the older tropes of sexually provocative imagery. The cigarette is a phallic symbol, and the smoke colors the image with an aura of lust and intoxication.

In another image a black woman is caught midway through her walk on the stage wearing a sequined bra and sequined underwear. Her pose is strong, and her walk is resolute, even as her eyes face the floor. The photograph shows a glimpse of the casual strip shows in Kampala. And there’s the photograph of the nude black woman wrapped in an animal print blanket. Her chest is bare and her vagina shows. She is posing quite assuredly for the camera. 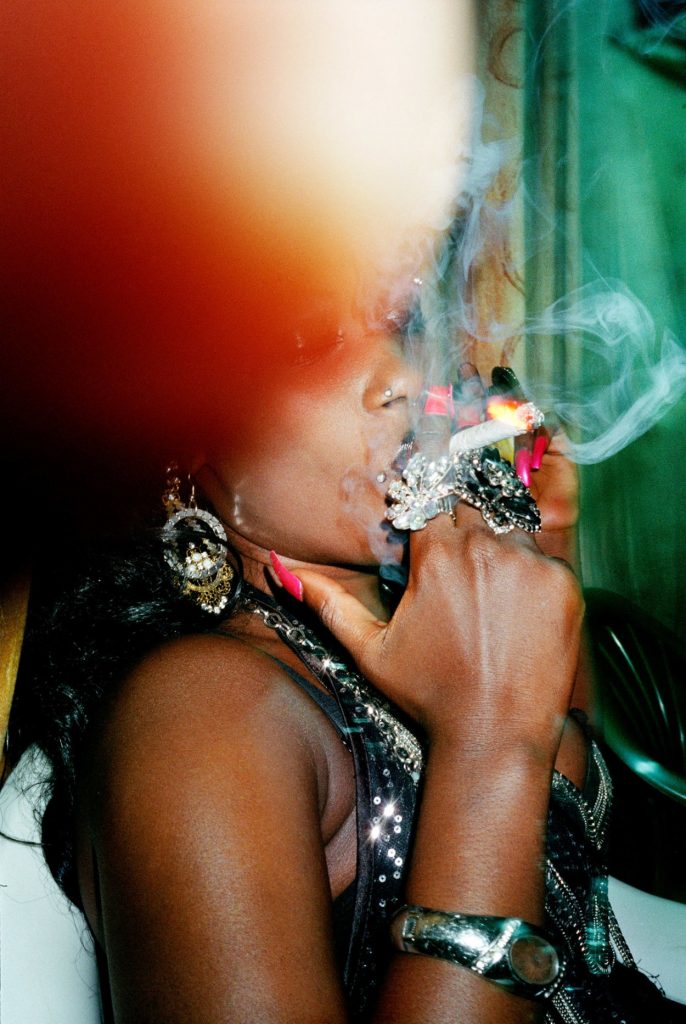 Other photographs in Fuck It show an environment of rudimentary housing, ghettos, and homeless people. A photograph of a pile of broken egg shells; another of the jacketed security guard with a bow and arrow shows us the surprising dynamics that shape this environment. Siblioni’s vision resolves into a montage of urban decadence and provocative black female sexuality.

The chaotic merges with the pornographic, black women are given the same amount of attention as homeless people, night watchmen and seedy bar scenes. The quixotic way in which Siblioni moves from party to street to egg shells to night taxi conductor to charcoal sacks to swimming pool to boda bike riders, and to heaps of rubbish is both cinematic in its ambition, and recalls the Whitmanesque imperative described by Susan Sontag, “Treat all moments as of equal consequence.” We end up seeing Fuck It as part of the vertigo of a wild party; a half-consciousness of scenes we barely recall afterwards. And yet there is no real subject outside of the photographer himself. The place of the photographer, beside the black females, and security guards and the heaps of rubbish, is that of a benefactor. Siblioni’s naivety in his photographing black female sex workers in Kampala is the obfuscation of being a white male primarily interested in photographing black female bodies. 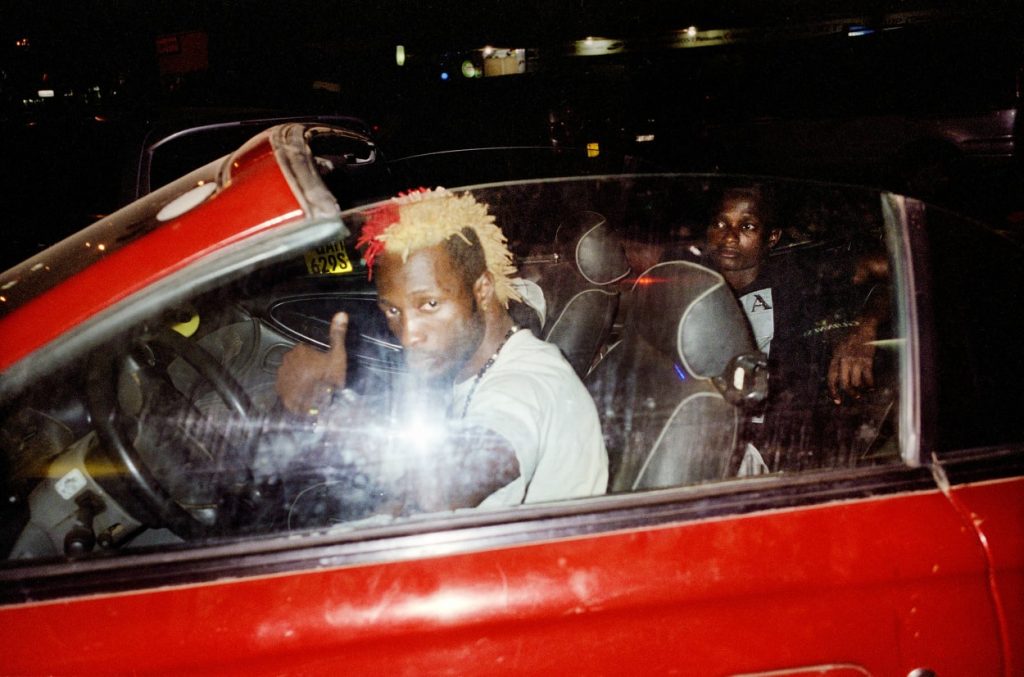 There’s one Holdt photograph of a black woman in a bathtub staring straight at the camera. Her eyes have a particular kind of sadness. She is completely naked. She’s wearing a choker around her neck. I’m drawn to this image because of Holdt’s depiction of black female sexuality. The photograph is beautiful, and the subject is the woman herself, and her thoughts, her sense of vulnerability.

Holdt’s technique in which black women shared their open nudity with him, and for his camera, has more to do with his political mission in the US. Holdt was interested in the lives of the underclass, and sought – though facetiously – to integrate fully into a life of limited or non-existent wealth. He made this photographic series in order to demonstrate for his native Denmark the devastating effects of those living in a country without welfare, and the country’s industrial capitalism. 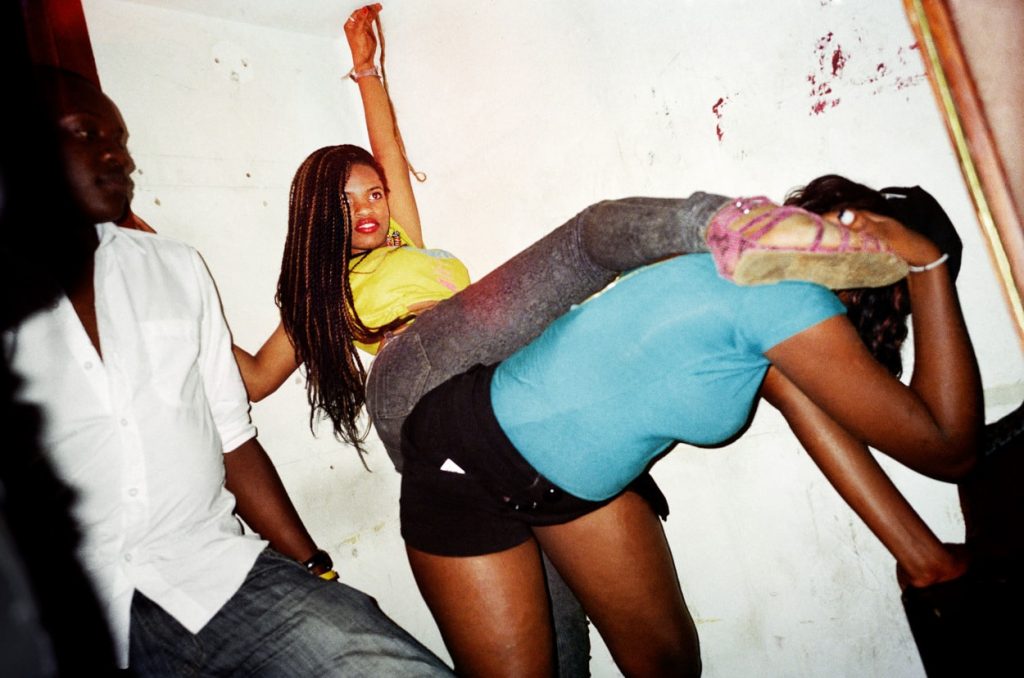 Holdt’s images of pornography are defined by his political and moral ambitions. I find the photograph of the nude girl in the tub facing the camera really fascinating because of the allusion again to purity and innocence, but similarly to the presence of the photographer and his moral position. Holdt’s pornography is not made for his own sexual gratification, but rather to expose the intimate lives of black people. His photographic journey is an experiment of living with the underclass. His photography is based on a misguided faith that he could become integrated in the underclass. Holdt also assumes a position of power in his storytelling.

Michele Siblioni, on the other hand, experiences a bar club scene that is tailored to serve an expatriate clientele. The explosion of foreign aid to Africa countries in recent decades has seen the rise of an expatriate population, and of course, of bars, clubs, and sex workers. The idea of Siblioni entering the bar scene in Kampala is also about the economic position of aid workers and the white male expatriates. Not only is Siblioni using his photography to document his own adventures, but the environment he does this within has been constructed to satisfy the white male desire for black women. In contrast, Holdt’s work becomes very intimate, and shows a genuine interest in getting to know his subjects. Holdt is interested in the intensely personal.

In both instances, the photographer is exploiting his subject, though in Siblioni’s case the purpose of shooting the subject is for his own pleasure, and hence the work can be interpreted as characterizing the white male gaze. It seems that the ultimate goal of Fuck It is to achieve the satisfaction of the white male ego, via the camera lens, and through exotic depictions of black women.

The war that doesn’t say its name

In the Democratic Republic of the Congo conflict, as well as peacemaking, have become ends in themselves, while the fighting is carried forward by its own momentum.

How we tell the story of African film history

For most outsiders, modern Ethiopian cinema means Haile Gerima and Salem Mekuria. But others, in addition to these, made its rich cinema history.