Central American migration, and especially the migration of undocumented children from El Salvador, Guatemala and Honduras to the United States, blew up in the American media during the summer. It was a time when many U.S. citizens felt that their government was deporting too many of these children back to the mostly violent and poverty-stricken conditions they were trying to escape (and many others felt that not enough were being deported).

Tonight, as President Barack Obama announced a series of measurements that are intended to facilitate the path to legalization for millions of immigrants, but that will also strengthen borders policing, U.S. news outlets might pick up on this human crisis again. Maybe most of them will not discuss the reasons why so many people from Central America decide to leave their homes and embark on a dangerous journey to an unknown land. Maybe only a few will mention the role of the United States in creating violence in Central America. We’ll see.

But for now, thanks to Honduran photographer Tomás Ayuso, we can see what it is like to actually live through this voyage. Ayuso is an independent journalist and field investigator for Noria, who focuses on immigration, the drug war and US-Latin American relations. For his photo essay The Right to Grow Old: The Honduran Migrant Crisis, Ayuso himself traveled from Honduras to the United States, documenting violence in the Central American nation, the world of “death trains” and shelters for migrants throughout Mexico, and the problems of crossing the border, as well as exploring the reasons and problems behind deciding to enter the United States.

Below is a selection of Ayuso’s pictures (with his original captions).

The southernmost points of the train network start in Tenocique, Tabasco and Arriaga, Chiapas. The freight trains used by migrants, popularly known as La Bestia (the beast) and El Tren de la Muerte (the death train), are found throughout Mexico.

“On the highways, I’ve been robbed. They’ve taken my phone, my money, my shoes and my shirts too. But thank God. Like I tell God, thank you father. As long as I have life… While there is life and hope, that’s what matters.” Rolando jumps between cars, demonstrating his ability to outrun anyone who chases him.

A man pitches a hammock on the Bestia in Arriaga to make sure he won’t miss his ride. Since the crackdown began, trains have been used for migration much less. The migrant route has been pushed into the dangerous mountains and forests outside major cities along the migrant route.

In addition to the different law enforcement agencies patrolling the US-MEX border, local and national border defense militias are popping up along the river. One such militia, Free Nebraska, joined the fray after the migratory crisis began receiving daily coverage by the national media.

Isaac looks towards Mexico at one of the many blind crossings into the US through the Rio Grande. “This section right here is pretty deep and pretty wide. They get in boats, inflatable rafts. Really anything. They’ll tie anything together they can get together that floats.”

Migrants fill out forms with basic information prior to release. The numbers from the CAMR have around 32,000 deportations by air in 2014 so far. Numbers of deportees by land from Mexico and Guatemala are unavailable due to poor record keeping, however the CAMR estimates an additional 30,000 have been deported via bus. 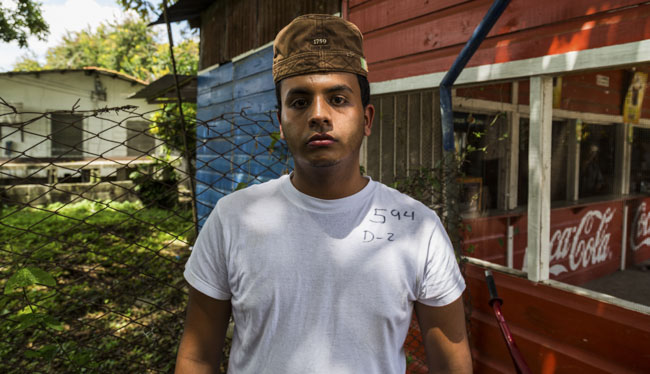 The number on Juan’s shirt was his ID while detained in Port Isabel, TX. “The guards were racist and harassed us. One taunted me that as long as my countrymen crossed the border they’d have jobs. Another guard would always tell us our countries were shit and that we were all criminals. In those bunkers they treated us like dogs.”

A mural painted by a passing guest at the only migrant shelter in Honduras. Located in Ocotepeque, it straddles the triple border with Guatemala and El Salvador. Unlike other shelters, this one caters mostly to people who abandon the migrant route and turn back to their communities in Honduras.

A group of migrants who had limbs amputated because of injuries by the Bestia, listen to testimonies during the first meeting of the congress of injured migrants. Participants from all corners of Honduras joined the weekend retreat high in the mountains surrounding Tegucigalpa. The congress held workshops and provided clinics to help migrants cope with their injuries, learn to value their place in society, and build a community among themselves.

No one is coming to save us

The government of Zimbabwe has decided it does not care whether Zimbabweans live or die.

Ghana’s ruling party has proposed a new law to control the country’s public universities. The country’s academics are fighting it.

The media’s crisis on Ethiopia

Western media coverage of Ethiopia’s political crisis turns a blind eye to the grassroots movement behind the protests.

Local traditions of crisis management—especially those resistant to predatory capitalism—have largely been forcibly shed along the path to “development.” The age of COVID-19 is the time to recover them.

To fight unemployment we have to fight capitalism

Three activists from the Assembly of the Unemployed talk to us about the challenges facing working-class communities in South Africa.