The English word ‘perspective’ derives from the Latin, perspectiva, which means ‘to see through’, and as such, instantly assumes a position – a viewer and a horizon, and an in-between space that demarcates self and other, subject and object, time and space. This is our modern perspective. Once this perspective is troubled – both visually and intellectually – orientation is challenged. As Hito Steyerl writes in her essay In Free Fall – “The horizon quivers in a maze of collapsing lines and you may lose any sense of above and below, or before and after, of yourself and your boundaries.” But of course, in reality, these lines of sight (and thought) are always warped, tilted, troubled and refracted, just as a horizon is seemingly stable, but exists in an infinite flux of relativity. To ‘see through’, to gain perspective, or to ‘sight the object’ is an illusion that the artist Ellen Gallagher relentlessly plays with. She challenges the relationship between visual perception and intellectual orientation, and in her work – which encompasses painting, sculpture, film and collage – she defiantly challenges linear perspective to redress what fellow African-American artist Theaster Gates has called ‘the African non-archive’.

A deep suspicion of linearity and its accompanying perspective (and indeed, the historical impulse behind it) is clearly felt in Gallagher’s early work, where penmanship paper acts as the base upon which she develops new symbolic vocabularies, riffing on the repetitive early learning of written language. But instead of practicing letters, Gallagher’s papers are inhabited by thousands of disembodied mouths and ears, small, almost indistinguishable features that dissolve into a rough geometry from afar. In Doll’s Eyes (1992), Gallagher’s aesthetic recalls the work of American minimalist Agnes Martin. But Gallagher feels uneasy with this comparison, once again preferring to align herself with a forgotten black history, in this case, with what she terms ‘the earliest American abstraction’ – minstrel shows and the ‘disembodied ephemera of minstrelsy’. In Purgatorium (2000), Gallagher composes a vast grid of thousands of hand-drawn mouths. She describes how the paper plays tricks: “The lines of the penmanship paper sort of line up and, from a distance, almost form a seamless kind of horizon line. But, up close, you see that it’s a kind of striated, broken grid.” Nothing is as it seems. Images shift and warp according to how we position ourselves, both physically and intellectually, in relation to her work, perhaps a visual reflection of Stuart Hall’s idea that ‘identities are formed at the unstable point where personal lives meet the narrative of history’.

This is Ellen Gallagher’s first retrospective in Great Britain at Tate Modern, featuring around 100 works from 20 years. From the relative calm of the watery-blue grids that line the opening room of AxME at Tate Modern, we move through to the kaleidoscopic hot-box film installation Osedax (2009), witnessing as Gallagher jump cuts through cultural history, art history, oceanography, electronics, science fiction and Detroit techno and back again. Her cultural references are frenetic. History is an arsenal to be mined and remixed, and her work, with all the wit and wildness she can muster, plugs the perceived voids and holes in the history of black culture. The result is a startlingly complex web of narratives, a frenzy of interpretation where titles pun off everything and oblique references cut across works separated by decades, only to be summoned again two rooms later by the refrain of a disembodied mouth. 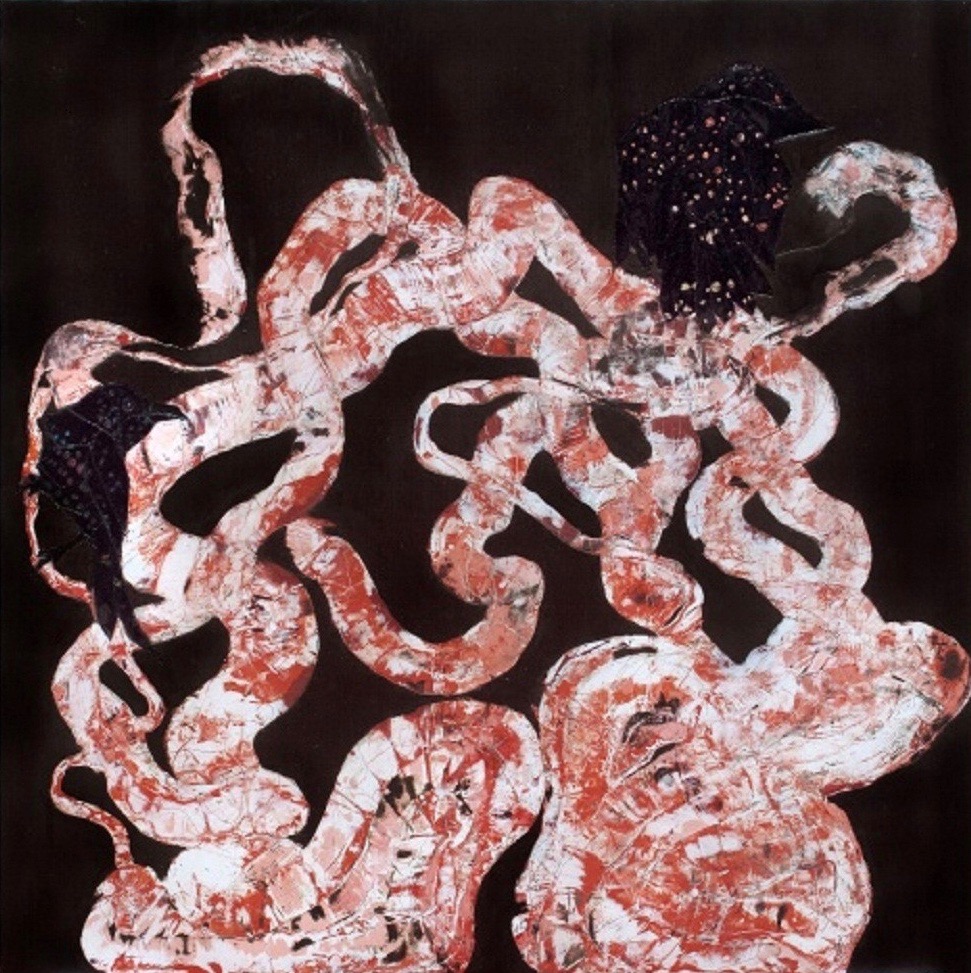 In Murmur (2003-4), a collaboration with Edgar Cleijne, a rattling projector illuminates a circular frame; plumes of steam, blue and diffuse, cut to images of animals bursting into light – combusting? Words appear on black leader – ‘…don’t be afraid, it was in our power to…’ / ‘What happened?’ but the significance of these words is dissolved by the inky light. Linguistic signs are meaningless here. A man stumbles, wearing some sort of burning yellow wig, distorted by the 16mm film stretch (an effect not dissimilar to wearing goggles under water). Gallagher is referencing the Drexciya myth, which imagines the children of pregnant slaves thrown overboard during the Middle Passage now existing as underwater creatures deep in the Atlantic Ocean. In turns, Murmur shifts between scenes appropriated and manipulated from old sci-fi films, to sequences from what look like old Westerns. Murmur dislodges time; an old future returns as a dark, watery myth reminding us of a horrific past. Gallagher has refracted history through the matter of its making; the ocean itself remoulds the form and the narrative.

This melting of subject and matter returns in the impressive two-part painting, Bird in Hand (2006; top image) and s’Odium (2006), displayed here facing each other. A pirate, or slave trader, or Herman Melville’s Captain Ahab – Gallagher is purposely oblique – stands underwater with a sprawling headpiece composed of warped faces (the cameos of drowned slaves?) and fragments of text extending outwards. He looks across at his dream, a vein-like plant pock-marked with gaps and holes recalling the eyes and mouths haunting Gallagher’s earlier works. Again, layers of penmanship paper are used, but there is no longer a semblance of symmetry. Instead, pasted fluidly are archival maps, pages from beauty magazines and dissolving layers of watercolour. On the trader’s body, Gallagher has attached shards of Himalayan rock salt, which shares the same mineral composition as the human body. An exchange of matter; an inscription of form into subject. A myth made plain. The work also draws on Gallagher’s own history – her father was born in Cape Verde, a region which greatly prospered from salt mining, and for three hundred years functioned as the heart of the transatlantic slave trade.

But perhaps the most impressive of the works exhibited in AxME is the film installation Osedax (2009), another collaboration with Edgar Cleijne. Here, in a box, two walls are occupied by projections. In one of them, a slide projector beams kaleidoscopic images, etched and distorted by the artist’s hand and magnified. Glass slides of alien life forms? The waterlogged kitenge fabric of African slaves, retrieved from the briny depths of the ocean? On the adjoining wall, a 16mm projector whirs, generating a heat which quickly becomes oppressive. In fact, the outside of the box is marked like a barnacle-encrusted whale skin – so are we inside the whale, looking out? In the film, an animated cormorant takes a dive, and a piece of music, sampled time and time again, hip-hop style, fills the gallery space. The box shifts from a whale’s belly to a sweaty club. It’s thrilling. The film cuts to an oil rig. Is it on fire? Are we actually in Sun Ra’s spaceship, watching the demise of earth from afar? A shipwreck appears on screen, and in the spirit of the frenzy of association Gallagher has nurtured throughout the exhibition, my exhausted mind returns to Hito Steyerl’s essay, to J. M. W. Turner’s The Slave Ship (1840) – a work that first disturbed the horizon line in nautical painting – to slavery and the Black Atlantic, to Géricault’s The Raft of the Medusa (1818-19), to Freud superimposed onto Matisse, to Gallagher as the Odalisque, to Sun Ra’s Dandies and the golden circuit board…

A freefall of links, remixes, references and languages. Gallagher is relentless. But in her purposefully complex system of signs and references, the artist goes a long way in achieving her aim, which is to create a new black history that is vivid, humorous, defiant, militant, beautiful and impenetrable at the same time.

To quote Sun Ra, “Your truths are self-evident. Ours, a mystery.”