On February 13, nearly 200 scholars and artists gathered at “Tomorrow is the Question: Afrofuturism, Sound and Spirit”—a symposium at Union Theological Seminary in New York exploring what an “Afro-future” might sound like and mean today. Panelists included multidisciplinary artist Korby Benoit, electronic music composer Val Jeanty, and scholars Beth Coleman, Michael Veal, Alexander Weheliye, and event moderator George Lewis. Benoit opened the event with a DJ set, and Jeanty provided the closing with an improvised sonic performance. The event was organized by the Institute for Religion, Culture, and Public Life and Columbia University.

What follows is a discussion between a co-organizer of the event, Columbia graduate student Didier Sylvain, and event attendee, Columbia professor of postcolonial Caribbean literature, Kaiama L. Glover.

Kaiama L. Glover is an Associate Professor of French and Africana Studies at Barnard College/Columbia University, specializing in francophone postcolonial literature with a particular focus on the Caribbean. She is the author of “Haiti Unbound: A Spiralist Challenge to the Postcolonial Canon.”

Didier Sylvain is a composer and PhD student in ethnomusicology at Columbia University. His research explores the metaphysical and political dimensions of futurism in black music, and, more generally, interdisciplinary work surrounding sound, race, and technology across the Afro-Atlantic world.

Didier Sylvain: What, to you, were some key ideas emerging from “Tomorrow is the Question”?

Kaiama L. Glover: George Lewis provided a capacious set of introductory remarks, reminding us that to imagine black futures is to be always recalling black pasts — engaging prophetically with history. Emphasizing the centrality of sound to the public — the social, the political — sphere, Lewis opened up some real space for thinking about the ways sound has mattered, matters, should and will matter to #blacklives in an all-too-often condescending and downright dangerous world.

DS: Can you elaborate on what you mean by “engaging prophetically with history”?

KLG: I was struck by the extent to which each of the panelists took up Lewis’ call to think of technology as an urgent social intervention vis-à-vis a precarious Afro-future — and by the fact that each one of them put that future within a dynamic historical context. Though Fanon certainly warns us not to become slaves of slavery, it’s pretty clear to me that questioning tomorrow would be an empty practice in the absence of dialogue with uncomfortable yesterdays. Korby Benoit and Val Jeanty explained and expressed musically, for example, their retoolings of ancestral techniques — technologies? — as ways of mediating suffering and contesting injustice. They were backed up in these practices by Beth Coleman’s more explicitly “futurist,” even activist project, whereby telling stories and making sounds can change the contours of our social worlds. Michael Veal conveyed a theoretical commitment to preserving jazz narratives in the conversation, including the technical complexities of (and relations between) Sun Ra’s sound and cosmology. And if Alex Weheliye dug in to a generative rehashing of the R&B vs. hip-hop debate, it was certainly a gesture toward potentially empowering solidarity.

I suppose what I’m getting at is the fact, as Glissant suggests, that we can — we must — revisit past narratives prophetically; we must reimagine the “same old” stories differently, with an eye to the present and to the futures we desire.

DS: You mention Fanon, which reminds me that, for him, the task at hand is to not only reimagine narratives of the racist colonial past and present, but to also “set afoot a new human being.” There seem to be traces of Fanon in Weheliye’s remarks on black technology — or “apparatuses and forms of embodied knowledge” — that bring about possibilities of the “human otherwise.” Is that a charge for today’s “Afro-futurist” discourse and performance — rethinking and enacting new types humanity?

KLG: First, let me say, in what I hope doesn’t come across as a cheap shot, Fanon actually talks about setting afoot a “new man.” That you generously update his language evokes something I thought was a particularly impressive element of “Tomorrow is the Question” and, I would argue, of the practice of Afro-futurism more broadly – notably, its inclusiveness and breadth as far as gender is concerned. I’m not just talking about the fact of a equal feminine presence at the event itself, though that was very cool, but about the fundamental way in which wariness regarding the reproduction of limiting social constructions of masculinity and femininity are concerned; because as we well know, “the racist colonial past and present” was and is pretty good at sexism, too. But I digress. Or no, I don’t. To update and differently inscribe past discourse so as to bring out the future-forward possibilities it engenders is to set our sights on that “human otherwise” Weheliye wants to explore. Because, like Fanon and Glissant and others, he rightly understands and foregrounds the relational nature of our being-in-common – our imperative to acknowledge the various iterations of our (social) difference and the ethical practice of being decent to one another in the face of this diversity. To me, that’s what an Afro-futurist humanism looks like. 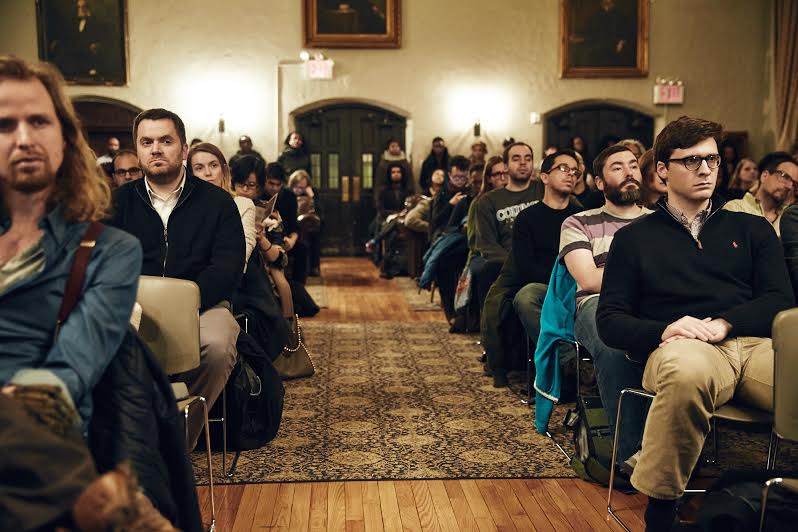 DS: Yes yes. To close, I would be remiss not to ask about these issues in the context of your work on francophone literature in the Caribbean. What postcolonial writers come to mind when thinking about “futurism” in the Afro-Atlantic?

KLG: I’ll walk right through that door you’ve opened and mention a few folks from the specifically French-writing postcolonial context – a look back, I suppose. Beyond the two Martinican theorists Fanon and Glissant who figure in my work, past and present, there is the Haitian writer-painter-mathematician-singer-teacher Frankétienne. Having founded the aesthetic philosophy of Spiralism in the mid-1960s Frankétienne has been writing fiction meant to be heard for decades now. The fact that he stayed and wrote in Duvalier’s Haiti has meant limited appreciation for his contribution, but that’s beginning to change as he and his work travel outside the country and are exposed to an anglophone audience. As was made plain during this recent event, one of Afro-futurism’s challenges will be to imagine solidarity with humans outside the U.S. — American context — to produce sounds and texts and other unifying artifacts that resonate across the divisive boundaries that are the legacy of the colonial past.

Uganda’s most controversial and disruptive politician

What if the social media conditions of 2021 existed in 1981? A group of New Zealand writers tweeted the damned 1981 Springbok rugby tour as if it was happening now.

Corruption is a class project

Different factions of South Africa’s ruling elite are implicated in looting and profiting from the state. South Africans should take an attitude of a plague on both their houses.

Swallowed by the archive

53 years after it was first made in 1968, the Ghanaian filmmaker King Ampaw’s short film ‘Black Is Black’ celebrates its inconspicuous premiere.

Abdulrazak Gurnah and the afterlives of German colonialism in East Africa

Gurnah’s Nobel Prize invites us to ponder Germany’s colonial past between the Scramble for Africa and the First World War in what is now Tanzania, Burundi, and Rwanda.

What does China want in Africa?

On this week’s AIAC Talk: China’s engagement with Africa is much debated. What exactly does it want on the continent?

The ultimate end of decolonization

Islamic scholarship in Africa and the meaning and end of decolonization in the work of religious studies scholar, Ousmane Kane.

The return of Patrice Lumumba’s remains must not be an occasion for Belgium to congratulate itself, but for a full accounting of the colonial violence that led to the assassination and coverup.

If you hadn’t noticed, we were on our annual break from just before Christmas 2021 until now. We are back, including with some inspiration.

On this week’s AIAC Talk, Will Shoki and Sean Jacobs discuss the history and politics of the African Cup of Nations football tournament.

In South Africa, the old endures and the new is nowhere to be seen. What is to be done? Public intellectual Steven Friedman helps us make sense.

The death of two protesters last month in Niger, could bring pressure for a meaningful Truth and Reconciliation for French colonialism in Africa.

Not much to see here

Don’t get to excited by the local election results in South Africa. The party system is fragmenting, but old apartheid divides persist.

Back to the future

The grievances of this generation in Kenya are disturbingly similar to those of the generation of the 1940s who took up arms in the Mau Mau movement. For both, it is about land and freedom.

The earth below the surface

The film, ‘We are Zama Zama,’ about illegal miners in South Africa, is a social commentary on the failures of post-colonial liberal democracies in Southern Africa.

The multifaceted effects of gender-based violence on girls in Malawi.