The Bongo family has ruled the central African country of Gabon uninterrupted for 49 years. This past August, President Ali Bongo – whose father, Omar, was in power from 1967 to 2009 when Ali took over – secured a second seven-year term in presidential elections. Since the announcement of official election results, violent clashes have erupted between Gabonese opposition supporters and police forces.

Gabon is the third richest country in Africa and one of the most stable countries in the central Africa region. It is strategically important to France, a former colonizer, as an oil producer and the site of a permanent military base since 1960.

In this year’s election, according the official results published by the Interior Ministry, President Bongo won with 49.8 percent of the vote, while his main challenger Jean Ping received 48.2 percent. Bongo defeated Jean Ping by a meager 5,594 voters. The victory included a bizarre 99.93 percent voter turnout in the President’s family stronghold in Haut Ogooué in the south of Gabon, while the national average was 59 percent.

Following the results, Ping said that the vote was “stolen” by Bongo. Separately, Ping wrote in the New York Times: “We have seen “results” like these before, but only from sham elections, most often in dictatorships.”

Normally, Bongo would get away with it (he still has some enthusiastic supporters in the West), but this time France and the European Union both echoed Ping’s doubts over the integrity of the results in Bongo’s hometown. They recommended a recount of the vote. Bongo refused, so Ping filed a voter fraud complaint with the constitutional court, hoping for a recount.

With the exception of seven years immediately following independence, Gabon has been governed by the Bongo family. During this time, government has been characterized by corruption, kleptocracy and widespread patronage.

Ali Bongo’s path to power was smoothed by a constitutional amendment in 1997 by Omar Bongo that removed the country’s run-off system, replacing it with a single round of voting in presidential, legislative and senatorial elections. Omar Bongo won that 1998 election before he was elected in 2005 to a sixth term. All these elections were marred by irregularities and violence, which allowed Omar Bongo to stay in office even while he was losing ground to the opposition.

Such electoral systems are exceptional on the continent. Out of 54 African countries, only seven hold presidential elections using it. But, the results are clear: Togo has been ruled by the same family for more than 40 years, Cameroon has been ruled by Paul Biya since 1982 and the president of the Democratic Republic of Congo has been entrenched since he came to power in 2001.

However, while one-round presidential elections can sometimes explain long presidential rules on the African continent, more than half of current presidents have been elected in first rounds of despite the existence of two-round systems. As such, it is not so much that one-round systems are favoring one candidate, but that electoral systems may be biased from the get-go, and may make it virtually impossible to defeat the incumbent.

Gabonese don’t trust the electoral system. Two days before the publication of official results for the 2016 presidential elections, Ali Bongo tweeted that he was awaiting his victory “with serenity and confidence.” Meanwhile, the president of the supreme court, who makes the final decision on the election, is Bongo’s stepmother.

By many measures, Jean Ping is a surprising choice as a democratic reformer in Gabon. He is very much part of Gabon’s political establishment and served in Omar Bongo’s cabinet for more than a decade, including as foreign minister. He was also related by marriage to the Bongo family – he has two children with Pascaline Bongo, also a government minister. Ping’s popularity, however, reflects frustration with the Bongos, and reflects a political landscape that is changing. For the first time in the country’s history, a united opposition has had a realistic chance of unseating an incumbent president and to end a family dynasty. This was achieved because of the opposition’s unity around a consensual candidate.

Change is what Gabonese seem to be looking for. They have little interest in a president ‘til death do us part. 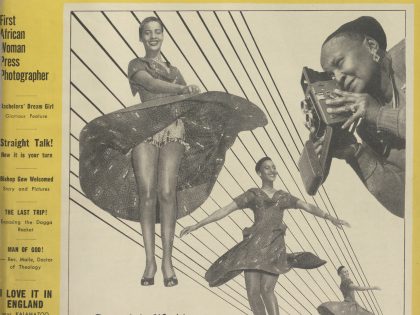 Remembering a picture’s worth

A brief history of five elections in Angola

The specter of Angola’s 1992 elections continues to impact the country’s democratic process.

South Africans agree that redistribution and economic security are urgent. But will they arrive via a deepening of democracy and public accountability, or a return to authoritarianism?

Everything the government does

Greed has fiercer allies than justice

The media of the useable past

Revisiting the papers of left, anti-colonial revolt from the continent can remind us of messy, rich alternatives.

This month, Africa’s largest democracy and economy goes to the polls. On the AIAC podcast, we discuss Nigeria’s upcoming elections.