On show at the Islamic Cultures Institute in Paris until January, 50 Years of Reflection, is an exhibition of the work of French-Algerian artist Halida Boughriet. It is one of many recent installments in France commemorating Algeria’s half-century of independence. Boughriet lives and works in Paris, where she has made videos, created installations, and continues to broaden her photographic portfolio. Below are her 5 favorite photographs, and her comments on how they came into being.

Photography often borrows its topics from painting, a tradition inherited from Gustave Courbet. The photo series ‘Memories in Oblivion’ (which was part of the ‘How to tame ghosts’ exhibition, curated by Bonaventure Soh Ndikung at SAVVY Contemporary gallery in Berlin earlier this year), are images of great historical figures seen through a reversed lens –one that takes ownership of the stigma attached to each of them. This aesthetic approach becomes a ritual and an act of portrayal. It is an approach that is critical of Orientalism, and inseparable from reality and its humanism — contrary to the Orientalist representations that didn’t see the human, and were mostly concerned with their own projections and lust.

‘Memories in Oblivion’, the first photo in the series (above), is still part of a work in progress. It is part of a series of portraits of widows who have suffered the violence of the war in Algeria. I was born and raised in France by my Algerian parents, and this period is an intrinsic part of my family’s history. These women in the portraits represent a collective memory: they are the last witnesses. However, when one evokes the war in Algeria, one never thinks about them, mainly because official history, nor popular imagination of the war includes them. However, these widows were very much part of that history, and that war: they have suffered, resisted, lost their husbands. I find them beautiful, regardless of their age, and I wanted, in my project, to help re-include them as a significant part of French-Algerian history in both official and popular imaginaries.

This series also relays the journeys made by these older men and women, rather than a static history in which they remain stuck. Their collective passage from one place to another resonates throughout this series of paintings. 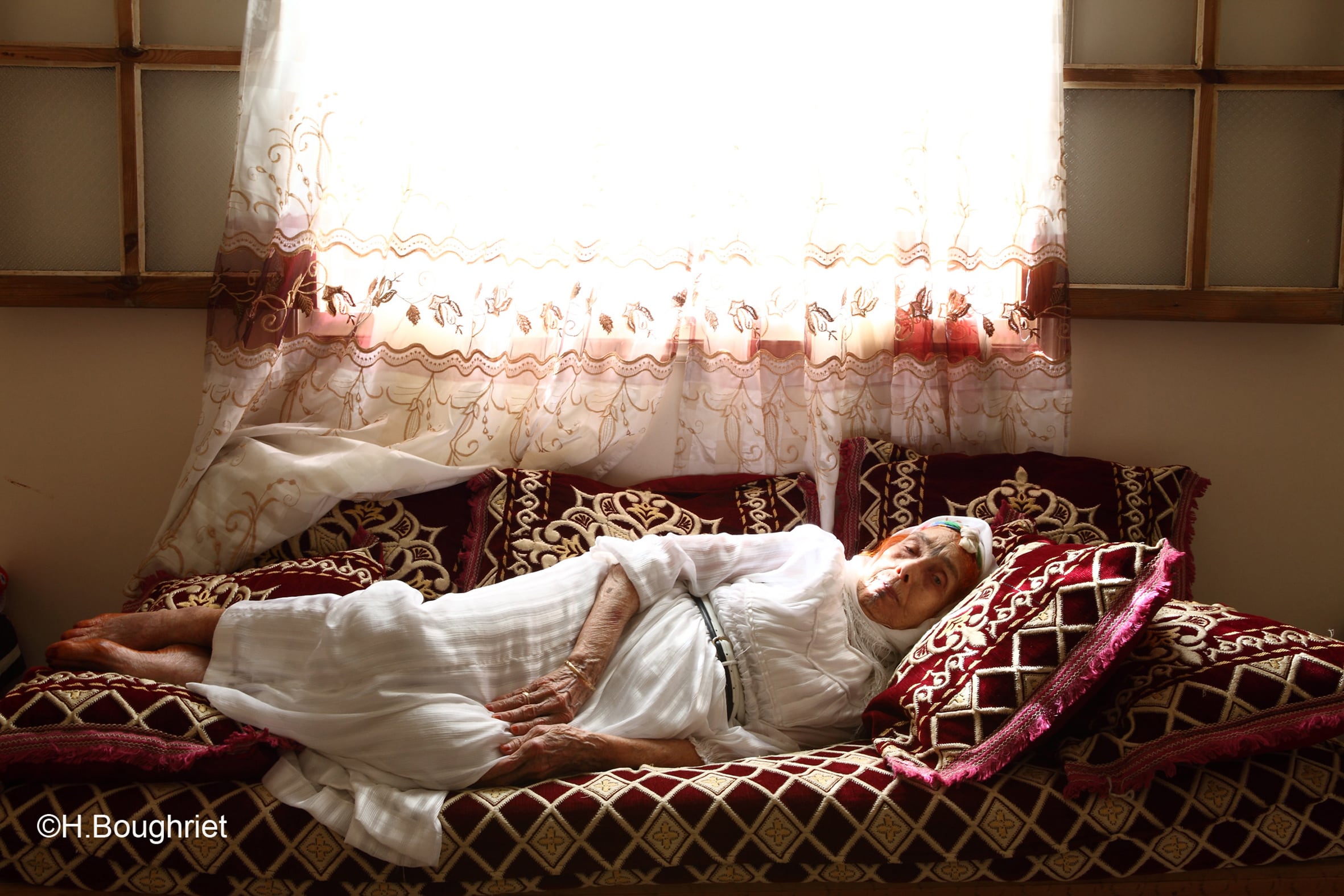 Here, also, I wanted to use the colors within the image and transform them into the subject of the photographs, re-appropriating the surface of the image. Light is very important to my work in these portraits, though I am, of course, interested in the faces of the women and men — light and colour help draw attention to the depths of history written on their bodies, and the silences surrounding them. I have photographed all of them in the same position: lying on their side, with a sort of aura that falls on them in a relatively dark space. I am inspired here by the orientalist paintings of Ingres, Boucher and Fragonard. I love the contrast between the sensuality, the lasciviousness of their posture and the twilight appearance of the room. The halo reminds me of Bernini sculptures. But my work is a kind of reinterpretation of the ‘Great Masters’ of Europe who wrote our bodies into the ‘western’ imaginary; I work with Orientalism, and against it at the same time.

These photographs of retired Algerians, like the one below, were taken in French “Sonacotra” homes (homes for migrant workers, social residences, guest houses, hostels, shelters for asylum seekers, etc.). What the subjects in the photos have in common is that they’re all left to their own. They are the representatives of an era ending.

The objective of an artist residency in Jijel (Eastern Algeria) in which I took part not too long ago, was first to collect texts on the notion of guilt and to transcribe them in red ink on the surface of a male and female back, meaning two different entities. The intention was to leave a space to speak, to write, somehow, in the form of a quest for redemption, but also towards human existence, its doubts and fears, or to rethink a collective responsibility.

Reflections around this question of guilt have helped me to collect testimonies by artists, playwrights, directors, slammers and poets. In Jijel, I photographed these actors with the help of Mustapha Ghedjati who worked on the calligraphy on the surface of the backs of the actors.

The photos were taken in many different places, including at the edge of the sea, as a purification to wash away the evils of the world. But my choice of photos here is this diptych in which the individuals have their bodies washed by a slight movement of the water, lapping over their nude backs, the ink slowly erasing. The rhyme on the man’s back is more dense than the one on the woman’s. Some changes of color allow for a unification of these two different worlds. The sepia harmonizes both and takes over their reality. This photographic diptych, which is now part of the MAC/VAL collection (located in the Paris commune of Vitry-sur-Seine), is printed on dibond bronze, which again modifies the photographic effect.

Artists have traditionally produced works intimately linked to our collective history. Some of these works were intended to remind viewers of the important role played by those who fought for freedom–this is especially true for those of us who are both French and Algerian. I want my work to be both incisive and engaging; as an artist, I feel that it is important to be a part of how audiences re-shape their memory as they readjust their opinions in light of new information about their history.

Paul Ricœur refers to this ambiguity of the concept of an oeuvre. An oeuvre, a work, is what we do, what we create and what we make of our lives … what we are. I just know that I have always wanted to work on reality, memory, man. Through art, I want to live my time, my presence. I have been making photographs for 10 years and I hope to make something universal. My multifaceted productions are marked by some violence, informed by my own story and those of others.

As coal is dying we must be prepared to absorb the transferable infrastructure of this industry and re-tool it for use in the emerging economy.

Take back the unions for their members

Why South Africa needs to democratize its labor movement.

On this week’s AIAC Podcast: A decade after the Arab Spring, Egypt faces troubled times. Could we see another uprising?

Somalis have enough to worry about. The last thing they need is more war, especially one sponsored by the United States’ War on Terror.

Beja music cannot be beaten by any regime

The Dorpa Band from Port Sudan, a city on the Red Sea coast in eastern Sudan, embodies Beja Culture. Their bandleader, writes what drives their music.