Jean Francois Bayart uses the Cameroonian term “politics of the belly” to describe patron-client relations in West African politics. Politicians distribute goods – filling the bellies of clients – in return for political loyalty, obviating the need for democracy and instituting alternative and sometimes moral forms of accountability. “It’s our time to chop” likewise captures the dynamic of exchanging votes for chop. When we hit the streets of Melville yesterday to snap photos of campaign posters for the South African elections today, this menu caught our eyes: 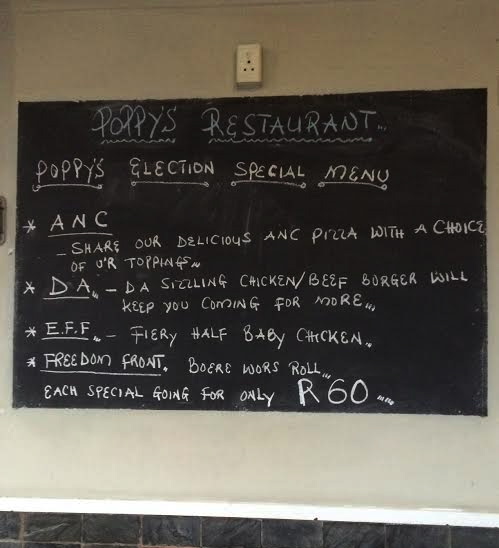 Political scientists and pundits often refer to “politics of the belly” and “cabritismo” (a goat will eat where he is tethered), another description of what politicians do. This restaurant took that literally and served up a menu of fare fit for party supporters or political observers bent on riffing on the metaphors available.

We don’t know why Poppy’s chef choose which meal for what party but here’s how we parsed their menu (give us your interpretations in the comments):

African National Congress–pizza: living off the dream of equitable distribution of the pie but when are the pieces ever cut perfectly evenly? And some have more cheese and toppings than others…then there’s the question of access.

Democratic Alliance-chicken or beef burger: well, it’s clear, they don’t know who they are. They are mostly white but they keep trying to recruit black members. Poppy’s lets you choose.

Economic Freedom Fighters–fiery half baby chicken: they are fiery upstart and former ANC Youth League leader Julius Malema’s new party with nationalization and land redistribution at the center of the agenda.

Freedom Front–Boer Wors roll: defending the old National Party and extreme right ways. This is a farmer’s sausage, folks. Do we need to explain?

We are not the only ones thinking about food and politics. Next week at Johannesburg’s Market Theatre Zakes Mda’s play “The Mother of All Eating,” directed by Makhaola Siyanda Ndebele opens. This plays looks at the culture of corruption popularly known as ‘eating.’

And here’s the bottom line of politics in electoral democracies in 21st century capitalism, whether it’s South Africa or the south side of Chicago. Whatever patronage politicians dispense, there’s no free lunch.