Last week on AIAC Talk we inaugurated our livestream series with a show about the politics and legacy of Steve Biko. You can catch a transcript of the interview with Dan Magaziner on Jacobin magazine’s website, and highlights from all our shows on our YouTube channel. To access the entire show’s archive, download or listen as a podcast, subscribe to our Patreon.

Tune in to our next episode of AIAC Talk, this Tuesday, September 22, on YouTube, Facebook, and Twitter at 12:00 EST and 18:00 SAST. We will discuss the legacy of another large figure from African history, Kwame Nkrumah.

On March 6, 1957, Nkrumah, the newly elected Prime Minister of Ghana, declared, “the independence of Ghana is meaningless unless it is linked up with the total liberation of Africa.” That night Ghana was celebrating independence from its former European colonizer, Britain. It was the first African country south of the Sahara to win its independence. This week coincides with his birthday, Nkrumah was born on September 21, 1909.

Three years after independence, Nkrumah had promoted himself to President. It was a post he held until 1966 when his enemies in the army overthrew him (as Euro-American powers looked the other way). In Ghana, his ideas and memory were largely marginalized in the 1970s as its successive governments made a turn to the right. He died in Romania in 1972 following exile in Sekou Toure’s Guinea. Today, Nkrumah is making a comeback, and it is the impact of his legacy on today’s generation that we will explore on this week’s show.

For this program, we’ve brought a panel consisting of journalist Anakwa Dwamena and historian Ben Talton together to unpack Nkrumah’s legacy. Both are known to our regular readers and followers. Anakwa, originally from Ghana, is on the editorial staff of The New Yorker. More importantly he is books editor and a contributing editor at Africa Is a Country. He has written for AIAC about Nkrumah. In March 2017, he wrote about Nkrumah’s connection to New York City, starting as a young student at Lincoln University in Pennsylvania. He’d travel up to New York City regularly. “While at Lincoln University, Nkrumah would often travel to Harlem. Here, the theology student would most often preach in local churches as he did back in Philadelphia, but perhaps just as importantly, he met thinkers like C.L.R. James and Arturo Schomburg, encountered a thought of Marcus Garvey and was inspired by a pride for Africa that stood in sharp contrast with the colonial situation back in the Gold Coast.”

Ben Talton is a historian of Africa. He wrote book about postcolonial Ghanaian politics, The Politics of Social Change in Ghana: The Konkomba Struggle for Political Equality (Palgrave, 2010). Ben is a native of Harlem, New York City, once a hotbed of Pan-Africanist organizing, of the kind promoted by Nkrumah. His book, In This Land of Plenty: Mickey Leland and Africa in American Politics (UPenn Press, 2019), tells the story of a US Congressman, whose life was the embodiment of pan-Africanist politics. Ben wrote about that pan-African politics for us when he wrote about Africa’s place in African American politics and popular culture. The book-end was the release of Nelson Mandela in 1990: “Nelson Mandela’s freedom and the Mandelas’ international tour did not end Apartheid but left no doubt that its end was imminent. Resistance to white-minority rule in Africa, and anti-colonialism generally, had been the tie that bound African American engagement with African affairs. The end of abject white supremacy in Africa was the African American consensus on Africa. Multiracial elections in South Africa in 1994 did not completely end African American engagement with Africa. But in subsequent years, Africa’s presence in African American politics and popular culture rapidly decreased.”

We will also feature a short interview with Grieve Chelwa, one of our contributing editors. He edits a new series for us on decolonizing and shifting public narratives around Climate Justice, Tax Justice and Extractives in African spaces. The big idea is to deepen and move mainstream conversations in Africa (and globally) about natural resource extraction, the distribution of wealth and the effects of climate change, as well as to galvanize popular pressure for reform toward lasting political change. One idea is to amplify the voices of Africans on the frontlines of struggles around climate and tax justice. The first phase of the project kicks off today.

The climate media project is generously funded by the Africa Regional Office of Open Society Foundation. 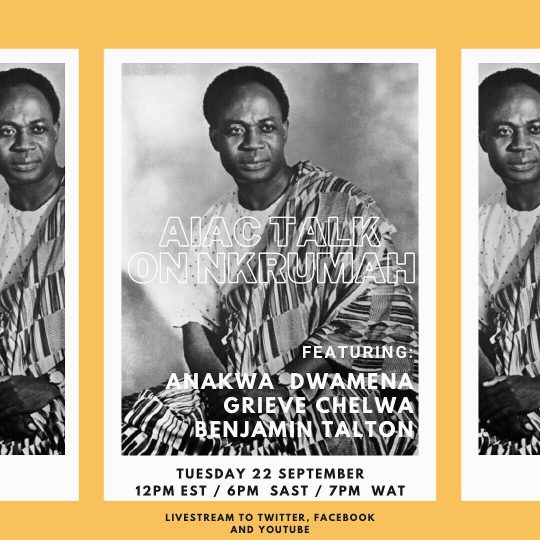