In my book, In This Land of Plenty: Mickey Leland and Africa in American Politics, US Congressman Mickey Leland’s activism inside and outside of government is a window into the tangled relationship between the US and Africa. During Mickey Leland’s tenure in Congress, from 1979 until his untimely death in August 1989 while traveling to a refugee camp in southeastern Ethiopia, he was Congress’s most dynamic and active voice on African issues. Leland, with a small but impactful group of former black radical activists with well-defined connections to Africa, used the power of their office to play an outsized role in the international movement to end white-minority rule in southern Africa. This period was the pinnacle of African Americans’ long, dynamic history with African politics.

While writing, I consulted a diverse collection of scholarly texts, novels, and memoirs that deserve special mention. Space here limits me to briefly highlighting four texts that uniquely resonated with my ambition to craft a multinational narrative in the book and to enhance my understanding of the Ethiopian revolution, its aftermath, and the conflicting relationship between pan-Africanism and national sovereignty in Africa.

With these goals in mind, I framed Leland’s activism broadly within Cold War politics and liberation struggles in Africa. Vijay Prashad’s The Darker Nations: A People’s History of the Third World is a nuanced, far reaching analysis of the Third World and the Cold War. Few texts match the strength of his explication of the perilous rise, fragility, and ultimate failure of Third World solidarity. The Darker Nations also illustrates the value of histories of failed and unfulfilled movements. The histories of leftist student movements, pan-Africanism and black power, which all converge in In This Land of Plenty, demonstrate the intellectual rewards of scrutinizing the offshoots, afterlives, and inspirations from Third World internationalism.

It was challenging to present these movements as strands powerfully yet loosely connected. I grappled with how to effectively convey unity’s elusiveness within the global south, whether built on Third World solidarity or, more narrowly, on pan-Africanism. Leland worked through the Congressional Black Caucus, the United Nations, and on his own accord to build a network of political leaders, policymakers and activists to work toward eliminating chronic hunger in Africa. His failed effort reflects the tenuousness of African solidarity built across multiple issues and national borders. Monique Bedasse’s Jah Kingdom: Rastafarians, Tanzania, and Pan-Africanism in the Age of Decolonization shows the similar challenges that constrained pan-Africanism. She presents Tanzania as the heartland of pan-Africanism in the wake of the coups that ousted Kwame Nkrumah of Ghana and Ethiopia’s Haile Selassie. Countless pan-Africanists of the time traveled to and temporarily relocated to Tanzania. Mickey Leland, as I describe in my book, was one of them. For him and others, Tanzania was pivotal to their political education. Yet, through the experiences of small groups of Jamaican Rastafarians who sought to migrate and settle in Tanzania during the 1970s and 1980s, Bedasse presents the difficulty pan-Africanists had reconciling their pan-Africanist sensibilities and aspirations with the domestic and foreign policies of African nation-states.

Jah Kingdom is a vital addition to an increasingly rich scholarship on pan-Africanism and decolonization in Africa and the diaspora. I similarly entwine decolonization, black power, pan-Africanism, in In This Land of Plenty, with the added dimension of the international student movement. Although these movements had divergent outcomes, they were inspired by many of the same social, economic and political grievances, conditions, and philosophers. Student activism in the US, Europe, and South Africa has been well documented, but there is surprisingly little scholarship on the Ethiopian student movement and its connections to decolonization elsewhere in the continent and African-American radical activism. Important exceptions are Bahru Zewde’s The Quest for Socialist Utopia: The Ethiopian Student Movement, c. 1960-1974 and Gebru Tareke’s The Ethiopian Revolution: War in the Horn of Africa. The former is a robust, comprehensive exploration of the students and intellectuals who were active in the movement that ultimately led to the fall of the Ethiopian monarchy. It proved to be an invaluable resource for me as I gained an understanding of the Ethiopian revolution’s innumerable factions, organizations, issues, and events. The Ethiopian Revolution rounds out this history of activism and revolution in Ethiopia. Tareke provides an exegesis of the complexities of the revolution and the civil wars, the Ogaden War, and the Eritrean secessionist war that erupted in its wake. Again, in light of the local and regional implications of the Ethiopian revolution and civil wars, it is perplexing that Tareke and Zewde’s books remain among the only comprehensive English-language analyses of the Ethiopian revolution.

In This Land of Plenty ties these historical events and processes in Ethiopia to issues and events in the US, Sudan, and in southern Africa. I emphasize the events of late stage Third World solidarity and the end of the Cold War in Africa. I place black power, the Ethiopian student movement, black consciousness in South Africa, and the anti-apartheid movement within this framework as constrained by the hegemonic forces of the US and other western powers’ dogged crusade to undermine challenges to western-style neoliberalism, even at the expense of African nations’ sovereignty. 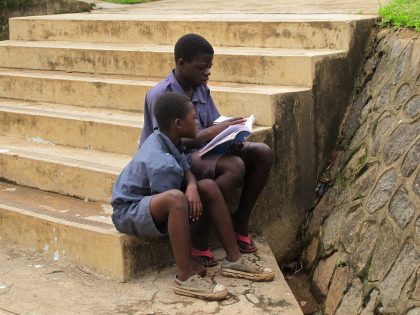 A small corrective to the tide of Big Media book lists that champion a small and predictable group of authors who together give at best a limited Eurocentric view of our world.