The World Bank effectively has a monopoly in the market for measuring poverty. Almost everyone has heard of the Bank’s “a dollar a day” measure. It’s famous. It’s thrown around at poverty conferences, poverty strategy sessions, in the business class section of flights to Davos, coffee shops, academic seminars at hip universities, et cetera. It seems that everybody (but the poor) knows about it. And the idea seems simple enough: Figure out the absolute minimum amount of money one needs to live meaningfully. Anyone with a daily expenditure below this minimum is then considered poor.

The World Bank first estimated poverty using this approach in 1990. And back then, this minimum was thought to be $1 per day. Since then, it has been adjusted upwards to reflect changes in the cost of living in countries across the globe. It’s currently at $1.90 per day.

(2) Behind this simple number is a battalion of assumptions. There’s nothing intrinsically wrong with making assumptions because social reality is complex. But it turns out that the assumptions the World Bank makes in arriving at its poverty measure are quite “strong.” In other words, using a different set of assumptions result in different poverty estimates to the extent that the Bank’s approach is “incoherent and meaningless.” That’s the charge levelled by Professor Sanjay Reddy, one of our favorite economists based at the New School for Social Research in New York City. Reddy makes this argument in a paper published last week with Rahul Lahoti (the version that’s not behind a paywall is here. We didn’t tell you). The paper’s main conclusions are discussed in this blog post and was also covered by The Economist.

(4) Still on this topic, a new World Bank report titled Poverty In A Rising Africa finds that

poverty in Africa may be lower than current estimates suggest and [there hasn’t been a] systematic increase in inequality.

Hmmm, we wonder what Professor Reddy has to say about this.

(5) Still some more on the World Bank: The human rights advocacy group, the Oakland Institute, has released a report alleging the Bank has resumed lending money to Ethiopia towards a controversial project linked to land evictions. The report is summarized and discussed here.

(6) Some more on poverty: March 21 marked the first anniversary of Namibia’s third president since independence, Hage Geingob. Upon assuming office,Geingob launched a “War on Poverty” which came complete with a Poverty Eradication Ministry. The stocktaking looks disappointing, one year hence.

(7) Things are looking up for Zimbabwe (or are they?). The country might later this year access IMF funding for the first time since 1999. True to form, the IMF has asked (or is it ordered?) the country to implement a series of “policy reforms” including a cut to public sector wages.

We wonder how wise this move is considering that Zimbabwe is still recovering, and perhaps hasn’t fully recovered, from a skills exodus of epic proportions. You probably want to attract and maintain skills as you rebuild the state’s capacity not scare them away. But who are we to say anything about this? The IMF are the experts here. They know best. Right?

(8) Although not explicitly mentioned in the IMF’s press statement, there’s been news (here, here and here) suggesting that part of the conditions led down by the IMF was for Zimbabwe to begin compensating farmers who lost land during the controversial land redistribution program.

Is this a policy reform? And is it borrowing from Bridget to pay Mary? We are curious to hear the opinions of Zimbabweans on this matter.

(9) The economist William Easterly this past week shared the image below and tweeted: “Let’s be clear that U.S. Foreign Aid is not about development, it’s about U.S. national security”. 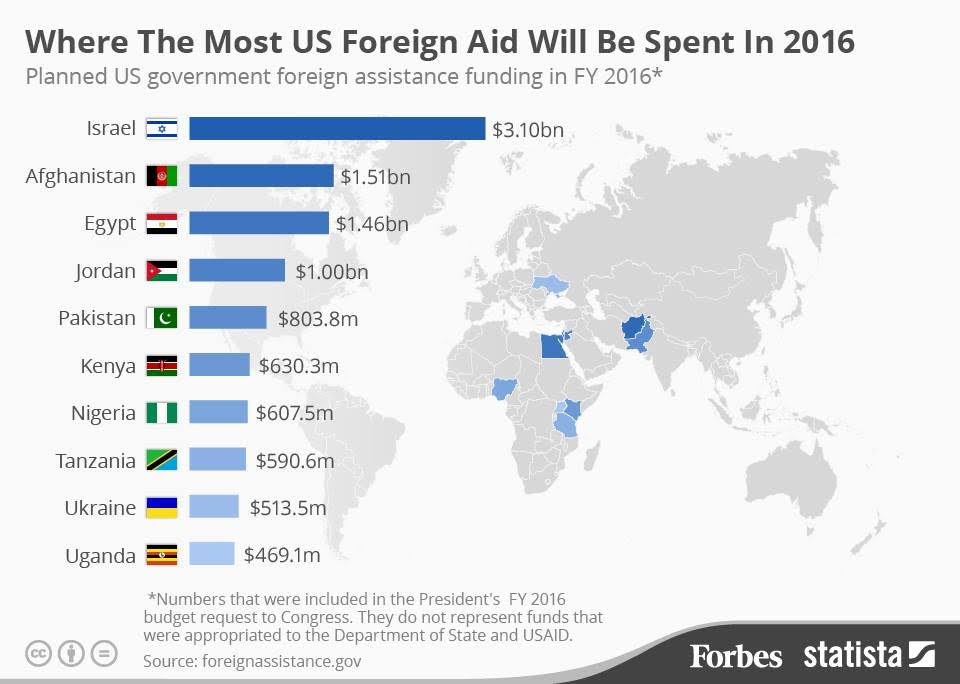 (10) Finally, in Russia, a homegrown credit ratings agency has been launched to rate Russian debt. This follows the exit of Moody’s, the impending exit of Fitch as well as Standard and Poors’ uncertain future in that country.

Ain’t nothing wrong with this, right? After all, some other big power in the world already has its own rating agencies rating its debt. Heck, we all should have our own rating agencies. We at Africa Is A Country have thus decided to rate our bonds Super-duper Grade. The best. Guaranteed to get your money back.

What is learning for?

The ideal South African is not the citizen but the consumer, and this is impressed upon children immediately when some are sent to private schools.

Africans’ lack of knowledge about our own shared refugee experiences continues to fuel hate and discrimination on the continent.

Ideas for how to pressure Uganda’s “M-Pigs” to become elected representatives who actually serve in the public interest.

Looking beyond the West to understand how to manage pandemics without choosing between saving lives or livelihoods. Live on YouTube Tuesday. Subscribe to our Patreon for the archive.

A special type of political personality

Upsetting color and its representations

What is one particular place when represented photographically?

The life and times of Trevor Madondo

Trevor Madondo achieved a certain immortality in Zimbabwean cricketing lore precisely for the way in which he confronted cricket’s history as an instrument of empire.

When discussing war is taboo

Dieudo Hamadi’s film ‘Downstream to Kinshasa’ is a powerful antidote to the DRC’s collective amnesia around the Six-Day War and its aftermath.

Drug use among young people in Nairobi’s slums is on the rise. Youth also face arbitrary arrests by the police, resulting in jail time which turns them into hardcore criminals in a vicious cycle.

How economic disparities, inequities, and opportunities occur side by side in Lesotho.

Who is afraid of Robert Sobukwe?

On the next AIAC Talk, we are exploring the life, thought and legacy of the pan-Africanist and anti-apartheid revolutionary, Robert Sobukwe. Watch it live on YouTube, Facebook, or Twitter. Subscribe to our Patreon for the archive.

The music of the Nyayo era

Tracing the music, from 1978 to the 2000s, that defined the rule of former Kenyan president Daniel Torotich Arap Moi.