Africa Is a Country reviewed the feature film, “Mother of George” in September 2013. Since then, much has happened in the life of the film that warrants a more fine-grained analysis of its endless cinematic offerings. The National Board of Review in Canada just named Mother of George one of the year’s top 10 indie films, and the week before that, Applause Africa awarded director Andrew Dosunmu (previous film, “Restless City,” 2011) the African Diaspora Award for Best Film of the Year. The film has also screened at the BFI London Film Festival, the Film Society of Minneapolis/St. Paul’s inaugural African film festival, in Stockholm, San Sebastian, and more.

Before we get into some of the cinematic nitty gritty, here’s a quick snapshot of the film (see Shamira and Steffan’s articles for more comprehensive overviews): Mother of George tells the emotionally penetrating story of Nike (Danai Gurira) and Ayo (Isaach de Bankolé), a newly wedded Nigerian couple living in Brooklyn, struggling with the profound internal and external pressures of not being able to conceive. As in society at large, the brunt of the burden and blame falls upon the woman, and this ultimately leads Nike to a decision even she thought was unthinkable. What follows is a complex and nuanced exploration of the questions and limits of what one will do for love, as told by a captivatingly unorthodox filmmaker.

From the first note of Yoruba wedding music that opens the film, the viewer is plunged into a world of shimmering golds, deep indigos, textures felt with the eyes, smells sensed through sound. Nike herself always wears colorful head-to-toe wax print outfits, never failing to leave the house without a gèlè (Yoruba, “scarf”) wrapped around her head. Even as her situation becomes more emotionally wrought and a change in fabric accompanies a major change in her life, she holds fast to color and to the hope that it symbolizes. The simple act of self-adornment allows her to provide for herself what no one else in her life can, and it allows her to cling to a sense of identity even as the people and events around her put it into question.

When asked about the source of his aesthetic inspiration, Dosunmu cites the color palettes of Yoruba ceremonies and deities like Ogun and Shango; paper-to-film imaginings of books like Amos Tutuola’s The Palm Wine Drinkard; depictions of Africans in Byzantine era paintings; Tuareg indigo. “I wanted to get into 2 million years of history that has been robbed in the past two centuries. How can we decolonize colonial images [of blacks]?” And so he imbibes an issue as old as humanity—bearing a child—with history as old as humanity, from Africa, the cradle of humanity.

Yet he never loses sight of the specificity of Nike and Ayo’s case. We see this clearly in an otherwise ordinary scene where Nike is alone hanging laundry on the roof. And what should the backing track be but a brooding and tumultuous opera piece by Strauss? It is an outwardly ordinary but inwardly monumental moment of internal reflection for Nike. As Dosunmu pointed out in a post-screening session at the Film Society of MSP’s African film festival in November, this scene also harkens back to an earlier one in which we first hear an orchestral Strauss piece. In that scene, it is Nike’s wedding day, supposedly the happiest day of her life, marking the beginning of a new chapter with her husband and (expected) soon-to-be family. The wordless laundry scene, then, suggests a folding back of thought on old memory and the ironic contrast between life and expectations then and life and expectations now. This kind of musical juxtaposition occurs not only within motifs but also across the numerous motifs throughout the film. “What is the contrast,” Dosunmu asked himself and the audience during the Q&A session, “of [Tuareg music] with Strauss? […] What does it provoke?”

Certainly one of the more provocative choices Dosunmu makes outside of music is the tightness of his framing and its focus on the expressivity of individual characters via parts—a curled hand, a downward glance, the feet of two friends. In one-on-one scenes, we often only see one of the speakers in the frame for the entire duration of the scene. Dosunmu explains, “I think what you don’t see is a lot more interesting than what you see. It’s the subtleness. It’s the unspoken. […] Why do we necessarily need to be on people’s faces when they talk? Why not their hand? My hand is a lot more expressive than my mouth.” The effect is a sort of reverse-engineered attention-directing, in that we end up focusing on what we are trying to see perhaps just as much as what we do see. It is a challenge then to the viewer to imagine the space, objects, and sounds not shown, to try to find a way past what is immediately before them. It can feel maddening as a viewer used to wider shots and more direct information about characters and surroundings. But that’s exactly it. Dosunmu physically makes the viewer feel and try to work through the myopia and claustrophobia that Nike is experiencing. 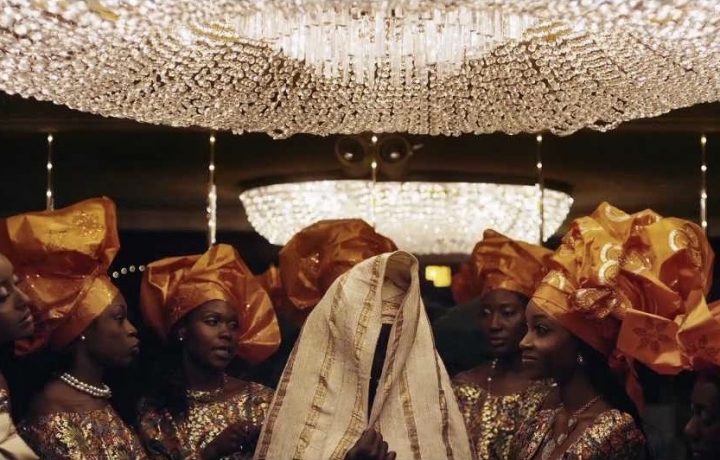 If that weren’t evocative enough, Dosunmu, with the artful hand of award-winning Director of Photography Bradford Young, experiments heavily with filtered images. Often, when the audience does get the chance to see two characters’ faces at the same time on the screen in conversation, it is through a window at Ayo’s restaurant, or in a mirror in Ayo and Nike’s apartment. It feels like eavesdropping, yes, but it also feels like the window or mirror is a physical manifestation of the distance between the interlocutors, that their conversation is being distilled through some kind of barrier that prevents them from truly understanding each other.

The creation of and experimentation with blurred images also serves to reinforce this sense of obfuscation. Sometimes the blurring seems purely aesthetic, as in one particular close-up on Nike’s hands washing dishes. Colors and shapes wash into one another as the sharpness of different edges appear and disappear. Other times, the soft focus seems to mimic the lack of clarity in the lives of all the film’s primary characters. And for Nike especially, it embodies the sense that pregnancy, by whatever means possible, is an idea as abstract and fuzzy as it has ever been. Even when, or particularly when, she has made the irrevocable decision upon which the whole story turns.

“Mother of George” is a goldmine for cinematic dissection, no question, and no question, much here has been left out. But it’s also important to remember the discourse it generates about what infertility means, along with all the social and cultural implications that individuals, families, and entire societies create surrounding it. Exactly what those implications are may depend on one’s milieu, gender, socioeconomic status, etc. However, one thing is certain, and it is that the inability to get pregnant continues to invite stigma and shame for those trying to conceive. Through constant manipulations of portraiture and imagination,”Mother of George” offers a unique look at one woman and her Nigerian immigrant family’s experience of this issue. Their story, as Dosunmu puts it, “is something that is culturally specific but universally accessible.”

A brief history of five elections in Angola

The specter of Angola’s 1992 elections continues to impact the country’s democratic process.

South Africans agree that redistribution and economic security are urgent. But will they arrive via a deepening of democracy and public accountability, or a return to authoritarianism?

Everything the government does

Greed has fiercer allies than justice

The media of the useable past

Revisiting the papers of left, anti-colonial revolt from the continent can remind us of messy, rich alternatives.

This month, Africa’s largest democracy and economy goes to the polls. On the AIAC podcast, we discuss Nigeria’s upcoming elections.