Eighty percent of Angolans today have only ever called one man President. Sure, some have had other allegiances; there was a serious armed opposition and there were 27 years of civil war, but José Eduardo dos Santos has remained the head of state for 33 years. His party hasn’t lost power since the anti-colonial war was won in 1975. But following impossible uprisings in Tunisia and elsewhere, talk of regime change in Angola has grown more serious.

When underground rappers emerged as key players in a burst of anti-government protests in 2011, Al Jazeera went to investigate. Its film, Birth of a Movement, asks: “Can young activists inspired by Angola’s underground rap scene take on a political elite that has ruled for decades?” It is an important question, which only raises more questions: what constitutes the long-ruling political elite? Outside of dos Santos and his family (and who is family? already more questions), who has the power to influence business as usual in the Angolan parliament? Perhaps this is asking too much of a 25-minute documentary.

Birth of a Movement is ultimately a portrait of three prominent activists: Carbono Casimiro, Mbanza Hamza, and especially Luaty Beirao, as they struggle to take on MPLA’s propaganda networks through popular media outlets. 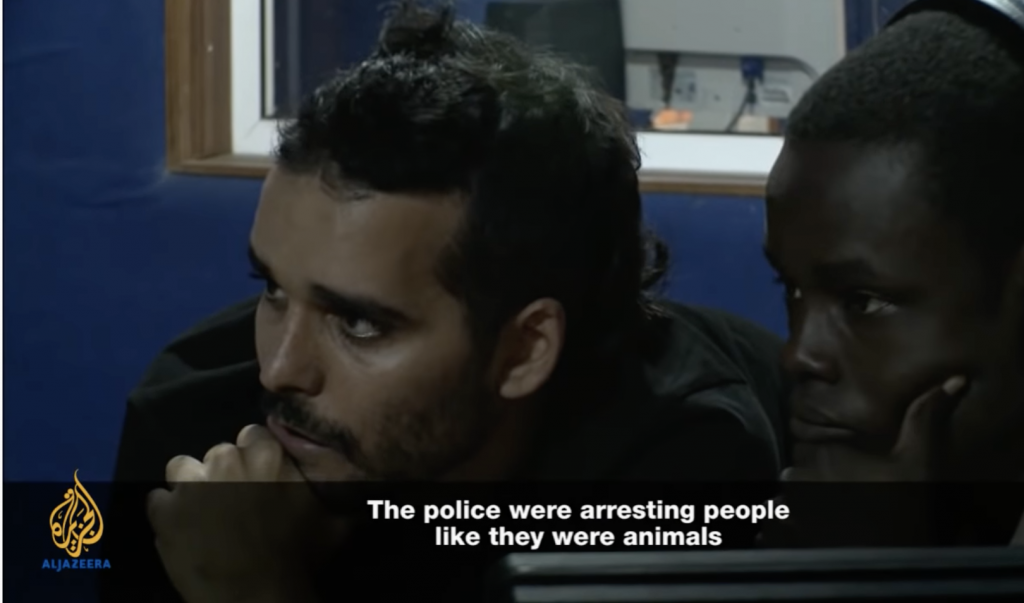 Cameras show the work of allies at a radio stations holding roundtable discussions on how to assert civil rights. They also follow the taxi-to-taxi distribution of political rap albums. Just a few years ago public criticism of the regime was rare; now it’s been played inside the most public form of transportation in the city. Filmmaker and journalist at Al Jazeera, Ana de Sousa, puts these actions in context:

Though hard for others less familiar with Angola’s history to understand, the very fact of 17 people attempting to hold a protest felt like a huge change. And as the year progressed and the protests grew, it just got more interesting.

…widespread fear of a return to war, and the distant memory of a political massacre several decades ago, had successfully stifled the spirit of public protest among those old enough to remember those events.

Later, the journalist’s bleak footage of a bloodied, ransacked room gives another indication of the state’s brutal crackdown on protestors, and public space. In the face of this violence Carbono, Mbanza, Luaty, and other activists featured in this film show tremendous strength and courage. The journalists and film crew documenting their efforts also have our respect.

But Birth of a Movement is also up against the constraints of the show it was made for: Al Jazeera’s Activate promises a focused, resolving narrative in under half an hour.

The show has its own rhythm, and stories are fit into their general format. First, the audience is introduced to prominent activists filmed in the middle of direct community action. Key facts about the history of their fight and the current situation are provided in a text bar on the right simultaneously. This opening sequence helps give each episode a sense of urgency and the excitement of breaking news. Once we know a little bit about the larger movement, we learn more about the individual activist’s decision to fight. We hear most from well-educated secular young men who frame their fight in terms of rights (appealing either to civil rights or human rights vis-à-vis group identity), while messier historic alliances are put aside. 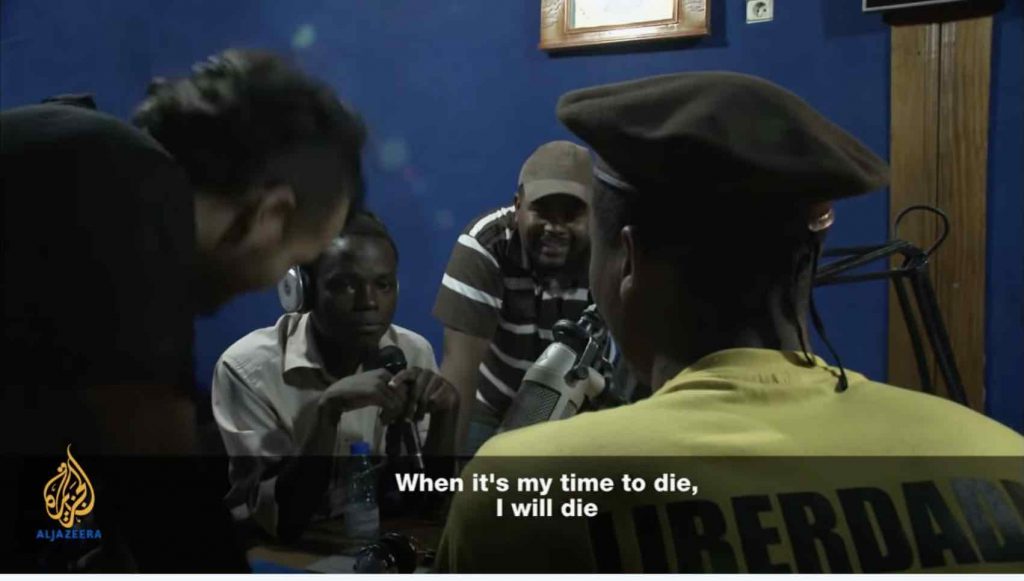 So, watching the documentary, we see fantastic shots of hundreds of people marching on the streets carrying the colors of UNITA, but there is no discussion of the long and complicated history of this political party, turned rebel army, turned political party.

In the lead up to the August elections, journalists in the country raised concerns about increased violent attacks carried out by both MPLA and UNITA supporters in the strategically important, symbolic provinces of Huambo and Benguela. Maka Angola’s António Capalandanda and Rafael Marques wrote that the lack of media coverage and dialogue at a societal level points to greater distrust between citizens and a climate of fear in front of the August 31st elections and its results.

Two months on, UNITA has continued to dispute the results of the August election through official channels. But not much is being said about efforts to acknowledge past violence. Christopher Pycroft puts this violence in some perspective:

During 1993, UNITA laid siege to pockets of government control in the central Angolan towns of Cuito, Menongue, Malanje, and Luena, seeking to divide Angola in two. Despite a partially effective unilateral UNITA cease-fire, announced in September1993, which enabled humanitarian aid agencies to bring relief to some of the 3 million people who were faced with imminent starvation, the situation in Angola remained critical. At least 2 million people were forced from their homes because of the war.

Can young activists work through the painful associations of their parents and grandparents?

And what about their music? We hear rap playing in the background of many scenes, but there is less discussion of who and how this music inspires. How do they see their work in relation to the larger body of important music styles in Angola, and to their political histories? Can they make truly popular music without being co-opted by commercial interests closer to dos Santos? We have seen for example, a complicated story of international investment in Kuduro. Maybe we see a little more when Luaty goes to help his friend make a music video.

So we’re back to these questions: what constitutes the long-ruling political elite? Outside of dos Santos and his family, who has the power to influence business as usual in the Angolan parliament?

See for example, these ministers of the church and party:

From the Catholic Church’s pre-election endorsement of the MPLA, to reports of certain Pentecostal churches announcing the presence of the SINSE (the state intelligence agency) to ensure members vote MPLA, to SINSE’s recent attacks on Father Pio Wakussnga for his efforts to fight housing demolitions and the forced relocation of poor and vulnerable communities, we can’t ignore the campaigns carried out under powerful church media networks. But given their own complicated histories with the MPLA the target of anti-government protest movement keeps moving.

What is clear is that the political fight is wherever people gather.