Some of the most indelible images of Muhammad Ali come from his 1974 trip to the Congo. He was the feted guest of dictator Mobutu Sese Seko  — who renamed the country Zaire in 1971 — for the spectacular “Rumble in the Jungle” title bout with heavyweight champion George Foreman.

The fight exemplified Ali’s boxing smarts. It was there that he debuted his “rope-a-dope” strategy to defeat Foreman in eight rounds. More significantly, however, Ali framed it as a demonstration of black pride: an African government hosted the fight; black pilots flew him there, and his trip amounted to a kind of homecoming for a descendant of African slaves.

Some of America’s and Africa’s top black musical talent — James Brown, B.B. King, Miriam Makeba, Manu Dibangu, and others — headlined a massive concert to accompany the fight. All the while, Ali reveled in the love and support of ordinary people wherever he went.

But the “Rumble in the Jungle” was far from the harmonious picture of black advancement Ali and his media acolytes painted. Instead, the fight highlighted the contradictions of postcolonial politics and racial nationalism.

These tensions defined Ali’s lifelong political engagements — at timesprincipled and progressive, at other times opportunistic and or conservative. 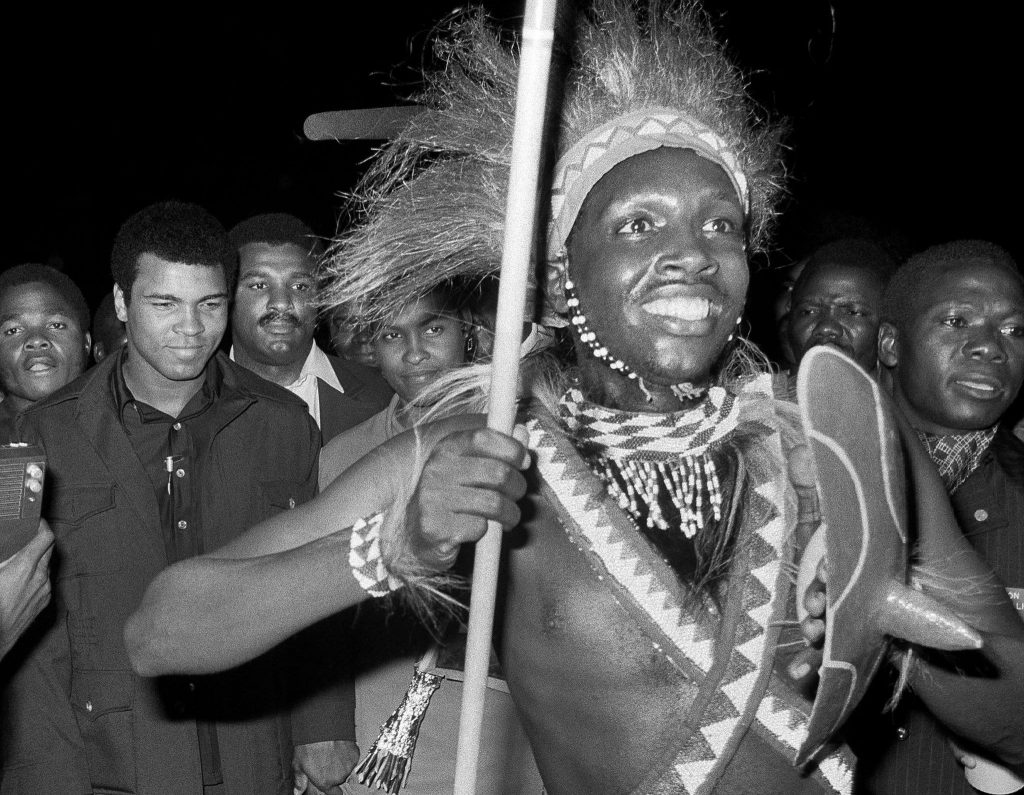 His host for the “Rumble in the Jungle” was far from a progressive third-world leader. For one thing, he was accused of working with Western powers to murder Patrice Lumumba — the first prime minister of the newly independent Congo — in 1961.

The United States, Britain, and erstwhile colonizer Belgium, together with their local allies, opposed Lumumba’s agenda for genuine independence, which included nationalizing the country’s natural resources.

Mobutu, who had been Lumumba’s right-hand man, eventually seized power in 1965. By the time Ali arrived nearly a decade later, he had turned the state treasury and the country’s natural resources into his private property and imprisoned or killed off most dissent.

That Ali said nothing about Mobutu’s despotism may have surprised many, but it was consistent with racial and Cold War politics at the time.

African-American support for movements that espoused Africanist-centered politics was very high during the late 1960s and into the 1970s. Mobutu mastered this rhetoric.

His government promoted what he called an authenticité policy: it banned Western aesthetics and culture, instead promoting African music, dress, names, and hairstyles. This was echoed in some African-American cultural practices, especially those associated with the Nation of Islam and Afrocentric movements.

But activists working with African revolutionaries found these developments frustrating. A case in point is the civil war that broke out just months after the Ali-Foreman fight in Angola.

Angola had recently attained its independence from revolutionary Portugal, and Western powers and their surrogates in the region — like apartheid South Africa and Mobutu’s Zaire — were not happy when the left-wing People’s Movement for the Liberation of Angola (MPLA) came to power.

The National Union for the Total Independence of Angola (UNITA) — a movement funded by the United States and South Africa — presented itself as more Africanist than MPLA, which had some white and creole leaders.

Many African Americans supported UNITA over MPLA. This is why historian and activist Walter Rodney, in a 1976 speech at Howard University, reminded his audience that “we must of course admit that to declare blackness is a very easy thing to do.”

In Zaire, Ali seems to have made a similar move, unwilling or unable to look beyond the pageantry of racial nationalism.

How did popular music become the battlefield of Uganda’s future? And what are the consequences?

What a year. Stay safe, wear a mask, social distance and when the vaccine becomes available where you are, get vaccinated.

A Port of Spain Christmas

On Christmas Day, AIAC Radio heads to Trinidad and Tobago to celebrate a unique Black Atlantic tradition. Tune in to Worldwide FM from 2pm-4pm GMT.

The problem with generalizations

Despite the media’s wish for a neat story, the African continent’s response to COVID-19 is all over the map.

As countries expand investment in decentralized renewable energy, its worth keeping an eye on who’s profiting.

What counts as “authentic” decolonization as the term takes over our social media and influencer bubbles? And how we can sharpen our activism.

For the peripheries and proletarians of the world—most of the world—Maradona is a symbol of defiance against the football aristocracy, corporate bosses and empire itself.

Tips from the apocalypse

Speculative fiction by writers from Africa explore viral apocalypses. What can we learn from art on catastrophe?

What was behind the assassinations in the 1980s of two key anti-apartheid figures: Swedish Prime Minister, Olof Palme, and senior ANC official, Dulcie September?

How has Nigeria’s film industry responded to the protests of #EndSARS?

The Ugandan government quells public unrest with violence. What won’t it do in the name of “security”?