The Lord of Lies and his minions of web traffic-grubbing demons are winning, and there just isn’t enough fact-checking holy water to exorcise them from our timelines and your chat groups.

The Internet has lied to the gullible for years, and fake news sites such as SDE, Spectator and Politica of Kenya have been carrying on the tradition.

Helping these children of Lucifer is all of us; That know-all in your chat group who is always “first with the news,” yeah, the one who posts fake news about accidents, goblins and so forth. The Facebook guru who is famous for being famous on Facebook. Outrage Twitter, up at dawn scrolling the timelines looking for things to get angry about. All of us. And Lucifer.

Why do fake news sites exist?

Easy. The love of money is the root of evil, such as all this fake news. Once you click on the link, fake news sites make a few extra dollars on all those ads you see on their web pages. They don’t care if you stay on the site for a long time to read more content; this is why they work hard to create viral, single news items.

Using web tools like webuka and siteprice, you can get an indication of how much these fake websites make in ads monthly. Take, for instance, SDE Kenya, the site that gave us lies about miniskirts being banned in Kenya and the Eritrea thing. In the days after the Eritrea hoax story, the site had an average monthly ad revenue of between $6,000 (via siteprice) and $18,700 (on webuka).  Not dead accurate, distorted by fluctuations in views, which went up to 102,000 daily views. But you get the picture.

The statistics show people stay on SDE an average 5 minutes. They don’t need you to stay long. Just long enough to get you reading that one viral fake story and get those ads.

Lucifer’s work is even more profitable elsewhere. Joseph Finkelstein, an SEO expert quoted in an article by the New Republic, said of one of America’s most well-known fake news sites, The Daily Currant:

But at most, over the few years they’ve existed, The Currant may have made as much as $500,000 in revenue—split between two people who are hardly doing any work.

You see the Devil and his work?

Why do they succeed?

Well, no kinder way to say this; they succeed mostly because we are stupid, prejudiced and ignorant. We don’t check facts, or question the source because we’ve come to believe that, as I’ve said here before, everything is true if it’s on the Internet.

We can forgive ordinary web users for having meme fun with fake news. However, it all gets worrying when mainstream media–many with large audiences–also join in, allowing themselves to be duped into providing conduits for fake news.

Check the source. Who said it? Where? Who else is reporting it? These are steps we could take to verify. But then Lucifer whispers “where’s the fun in that,” and we press the share/retweet button, spreading lies.

Mainstream news sites that do that also profit from high traffic to their sites, even if it means sacrificing some credibility.

Why are media being duped?

Fake news websites play on our own prejudices and ignorance. They bank on us, and major news media, wanting for certain news to be true. Some of the news feeds our existing prejudices; about Africa, and even our own countries.

Josh Voorhees, of Slate, in an article he wrote when Drudge fell for a story on The Daily Currant, said fake sites “rely on (mainstream media) wanting to believe a particular story is true.”

And “wanting a story to be true” is the case with all the stories about President Mugabe. When the US legalized gay marriage in 2015, AWD News, a fake news site, wrote that Mugabe had reacted by “proposing marriage to [Barack] Obama.”

In no time, the article had been shared widely on social media. South Africa’s News24 took it as fact and published it. The BBC published the article as fact, linking to the AWD story with no hesitation. The UK’s Daily Mirror also did the same. In December 2015, BBC Africa reported the “I want to marry Obama” quote as one of its “top 2015 quotes.”

In 2015, Spectator, a fake Kenyan site, wrote a fake story claiming Mugabe had called Kenyans thieves. The story made it into an otherwise great story on Kenyan corruption by the NY Times. After some criticism, to the paper’s credit, the fake quote was removed.

Yet, an example of “wanting fake news to be true” came from Jeffrey Smith, of the US rights group Kennedy Institute. He shared the Kenya story on Twitter; a corrupt man like Bob had no right to be lecturing on graft, he shouted. When told it was all fake, he replied: “Wouldn’t be the first time he’s made such comments.” The “Obama story” was fake too, but, you see, this sounded like something Bob would say. 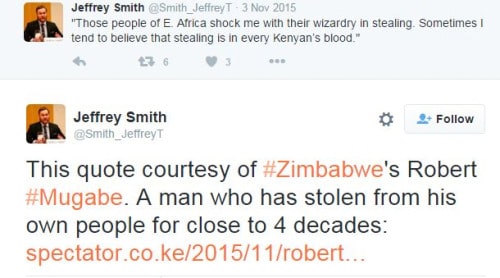 Which, somehow, makes it all OK. It appears a story doesn’t actually have to be factual, but just believable.

It’s true. I read it on the BBC. It was in the papers too.

One of the major reasons fake news succeeds is gullible “mainstream media” sharing it online. Desperate for content and engagement, and eyeballs to their own websites and paper sales, fake news is pushed on audiences without so much as a basic fact check.

This is how we end up with purportedly reputable news sources such as the BBC reporting it as fact that Mugabe wants to marry Obama. 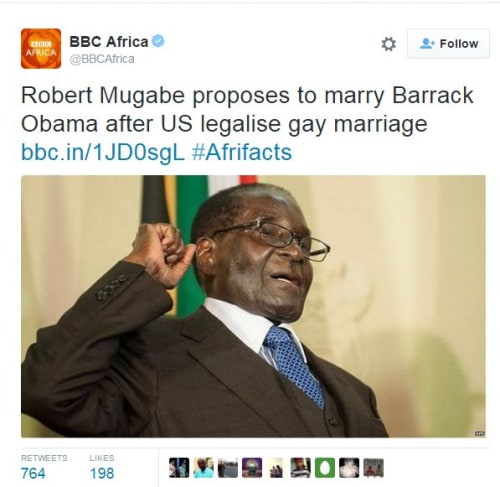 You get the feeling that, many times, major media do not put stories from Zim or Africa in general through the same credibility tests as they do stories from elsewhere. This is something I’ve blogged before.

Will this ever end?

It won’t. There’ll always be people who lie and people who believe lies. So, no.

Facebook has tried to stop the sharing of fake news on its walls, but it’s all pointless. Because, face it, if people are still crazy enough to believe, and share, fake news, there will always be people crazy enough to produce fake news.

Lies are more fun than facts. Lies are proving to be more profitable for websites. Facts are boring anyway. Even here in Zimbabwe where facts can be more hilarious than fiction.

Facts have never been popular on social media – and that, in fact is, one reason why social media is popular.