This week is about charts. First up, is a chart from the newly launched Global Consumption and Income Project (GCIP) spearheaded by Professor Sanjay Reddy of the New School for Social Research. (We’ve written before about Professor Reddy’s work challenging the World Bank’s poverty estimates here.) The chart shows levels of income inequality across African countries for the year 2014 (most recent year with available data). Inequality is measured using the Gini Coefficient which measures inequality on a scale of zero to one. (A Gini closer to zero means low inequality while that closer to one means high inequality.) Surprisingly, Nigeria, with a Gini of 0.4883, has the lowest level of inequality on the continent. Unsurprisingly, South Africa, with a Gini of 0.6624, has the highest inequality measure on the continent. The other countries fall somewhere in between these two extreme cases.

(2) The second chart, just below, digs into the underlying factors behind South Africa’s high inequality. First published by The Economist in December 2013 (after Nelson Mandela’s death), it shows, among other things, the evolution of average incomes per person across different racial groups in South Africa from 1917 to 2011. The first takeaway from the chart is that before the official ending of apartheid in 1994, average incomes for whites rose at rates that were considerably higher than those of other racial groups (see the blue line) – unsurprising as this was Apartheid’s main aim. The second takeaway is that the “freedom bonus” largely accrued to whites only – their average incomes nearly doubled over the period 1994 to 2011. This too is unsurprising as the opening up of South Africa’s economy after 1994 was only going to benefit those who had previously been privileged in accumulating capital (real estate, land, equity, savings, etcetera) and skills.

The chart is a great antidote to those who think history doesn’t matter in South Africa. We are especially looking at you, yes you, the choir that likes to sing the “black people are just lazy” song. (H/T to Josh Budlender on Twitter) 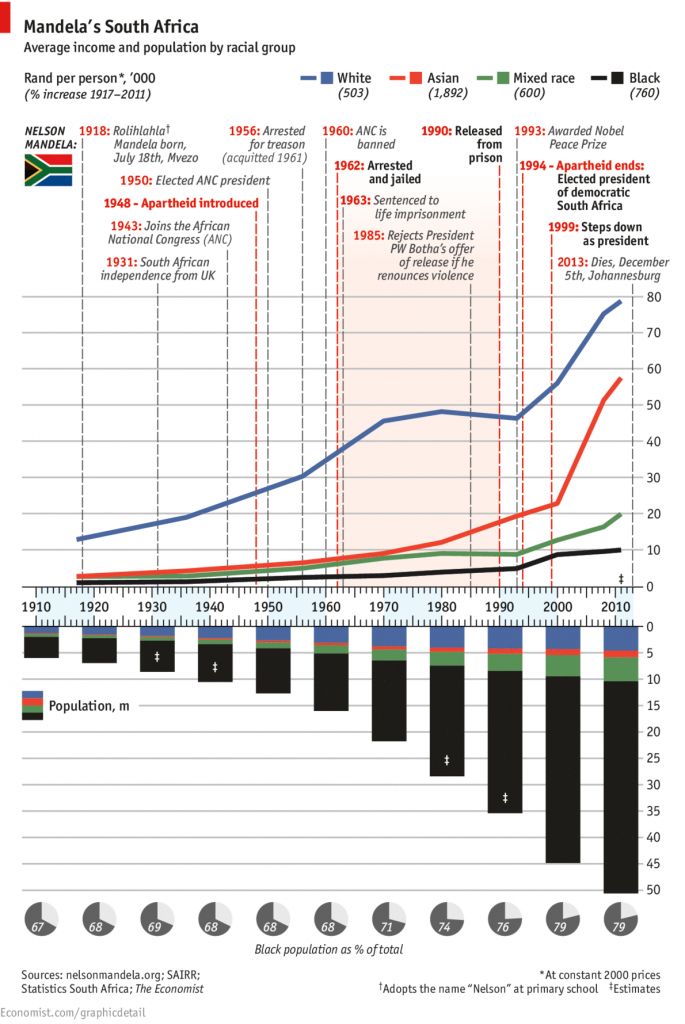 (3) The next chart is taken from Afrobarometer and shows issues that are of most concern to the everyday African across 36 countries (the survey was conducted in 2014 and 2015). The most cited issue of concern is unemployment, followed by health and education. (H/T to Carlos Lopes on Twitter) 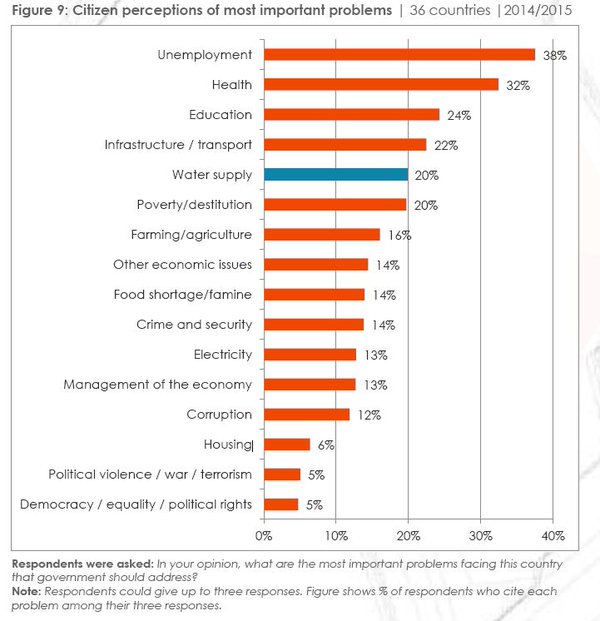 That’s on maps for now.

(4) Naturally, we wanted to find out whether the concerns raised in number (3) are reflected in the kind of research questions that economists working on Africa are asking. And what better place to look than the Economic Development in Africa Conference held every year at Oxford University and billed as the premier conference for economists working on the continent (yes, we’ve blogged before about how troubling it is that this conference is held in Oxford). Justin Sandefur of the Center for Global Development went to the 2013 edition and conducted an analysis of the focus areas of the papers presented that year. He split his analysis based on whether the economist was African (i.e. African-based) or non-African. Sandefur found that:

African scholars [were] disproportionately interested in labor (i.e., jobs), firms (possibly jobs again), and monetary policy. Non-African scholars [were] disproportionately interested in political economy, conflict, natural resources, and (an outlier) migration. Roughly speaking, there [was] a division between jobs-focused papers by African researchers and papers by non-Africans focused on institutions.

Does this disconnect surprise anyone?

(5) One of our favourite UN bureaucrats Dr. Carlos Lopes of the Economic Commission for Africa (ECA) sat down for an interview with South Africa’s The Daily Maverick to make the case for “interventionist states” in Africa. Here’s a sample:

[African] states need to get involved. The terms “developmental state” or “interventionist state” might be unpopular, but that is exactly what is required for African countries to lift themselves out of poverty, to achieve the kind of economic development required to tangibly improve the lives of hundreds of millions of African citizens.

The idea that governments could intervene in the economic affairs of their respective countries was rendered obsolete by the market fundamentalist ideas of the Washington Consensus.

(6) More on Dr. Lopes: We watched this really insightful talk on understanding Africa’s infrastructure appetite. Here are some facts from the talk that we were unaware of:

(7) We read this rather puzzling sentence in Chapter 11 of the 2014 book “Zambia: Building Prosperity from Resource Wealth” (emphasis ours):

Public ownership [of companies] remains surprisingly popular in Zambia, reflecting both President Kaunda’s ‘African Socialism’ and the controversial record of the privatization program of the 1990s.

Why is any of this surprising? Something is obviously going to be unpopular if it’s controversial. Duh!

(8) Is this the return of the Zim Dollar?

(9) Lastly, why is the government of Nigeria so clumsy? They’ve misplaced another US$15 billion.

A new star in the southern sky

The impressive debut album of the Malcolm Jiyane Tree-O marks the arrival of a unique genius in post post-apartheid South African jazz.

After unrest in July and municipal elections in November, it’s clear South Africa is in the midst of a serious social, economic and political crisis. What are the roots of it? Listen to this episode of AIAC Talk to find out.

Music makes the past alive

Africa Is a Country Radio is back with a new season. Each show will be inspired by the work of a different African author. First up, we explore the Ethiopian Tizita with Mukoma Wa Ngugi.

In both the rebuke and lionization of F.W. De Klerk, who recently died, there is an attempt to squeeze power into the zone of emotional sentiment.