Zacaria, (Khalid Abdalla) having returned home to Morocco after a long time away, searches desperately for his missing brother Yosef, who it is suggested has been recruited into a militant Islamic organization. Propelled forward by clues on scraps of paper and vague whispers by strangers, Zacaria attempts to follow his brother’s movements, moving through Casablanca, Istanbul, and Kurdistan to Bagdad.

Searching for his beloved sibling, seeking a forgiveness and redemption that only a disappeared Yosef can offer, Zaccaria encounters a set of fellow travelers. Most compelling and interesting is his fragile father-daughter relationship that develops with Aichia (Fadwa Boujouane), a young orphan who he rescues from the clutches of a violent sex-trafficking pimp (Hocine Chouti). While Zacaria’s search rests at the center of the plot, the film also and unevenly follows a cast of intriguing women (and the girl) who cross his path. Aichia, Yosef’s abandoned wife, the pimp’s abused partner Nadia (Majdouline Idrissi), Zaccaria’s former lover Judith (Marie-Josée Croze), and a beautiful, expressive Milouda (Hindi Zahra) with whom he seems to share an intimate night of trust and recognition, are in many ways more fascinating than quest-focused protagonist who ambivalently abandons them each.

Nonetheless, Hadid’s film hovers, allowing the viewer a distant view of loss—with a multiple of valences. The loss of brother, husband, lover, parent, child—is interwoven with the loss of safety, peace, memory, nation, and sovereignty. All of the characters, with the exception of the innocent yet fierce Aichia, are haunted by a past, and haunted too by decades of violence still tormenting the present.

The film’s beauty acts as a powerful elixir to its story of war’s wreckage. Zacaria, searching for his brother, visits a slaughterhouse turned morgue, and while blood is efficiently cleansed from the butcher blocks, the camera raises to show a bounty of corpses all covered in sheets the color of pink roses. Under the spell of Hadid’s vision and Alexander Burov’s gorgeous cinematography, a morgue becomes a garden of grieving. Left behind in the hills, Judith anguishes in sun-filled rooms, her shoulders caressed by Aichia’s brown hands and gentle breezes that whirl flower petals in the emptiness.

The beauty of the images cannot serve to temper the many frustrating silences in the film, the personal and political histories fragmented, in orphaned ruin like the dilapidated structures that mark the film’s urban and more rural vistas. Still, tenderness and terror are braided together with an elegant visual language that, while not driven by plot and character development, offers a new and complex vision of worlds in steep contrast to the other-ing images ubiquitously shown in Western media, images that craft the places and people of Northern Africa and the Middle East as strange, terrible, and in need of taming.

Executive produced in part by Louverture Films, the company founded and lead by actor/cultural-activist Danny Glover, A Narrow Frame of Midnight, takes its place within an eclectic collection of global films supported and developed in part by Glover and his team. I had the chance to speak with writer-director Tala Hadid and producer Danny Glover about their collaboration and the broader issues shaping the production and dissemination of African film.

The film has been screened at festivals in Toronto, Dubai, Korea, and London for example. How important was it to both of you that A Narrow Frame of Midnight screen at the New York African Film Festival?

Danny Glover: It is important, as this film tells not only an Arab story, and an African story, but speaks to the human dilemma, ruptures of conflict, historic pain, and everyday life. So I thinks its important, that the African Film Festival include films that go beyond the idea that something African is something only concerned with sub-Saharan Africa. I see this film in the tradition of Ousmane Sembene, Khalil Gibril, and Mariama Ba, those decolonizing and liberation processes, many of which took place at the same time in Africa and the Middle East. The film follows in those traditions, but now we are at a point when the contradictions and the dialectics have changed somewhat, so we are dealing with another kind of resolve to speak to our human existence.

Tala Hadid: I’m happy for all audiences to watch the film. But yes, I agree with Danny, that it has been very important to participant in the African Film Festival, in New York, given what is embodied by Africa. The film comes from the global south, the so-called periphery—essentially telling these stories that are so difficult to be made, to be distributed. It is very important to have spaces such as this to screen the film, so these spaces may be spaces for dialogue. The project aligns with Danny’s work with Louverture Films that produces films from Africa, the Middle East, films with a very specific and crucial political content. The film is set primarily in Morocco, an African country, at the frontier, populated by a mix of Africans and Arabs, very close to Europe; it is an entry point to the continent. The film is open enough to be claimed by African film festivals and has screened at several African film festivals, not just in Europe or the West. And given the importance of Africa, that all eyes are on Africa, it is very important that the film represent the vast open field of many voices that are waiting to tell their stories. 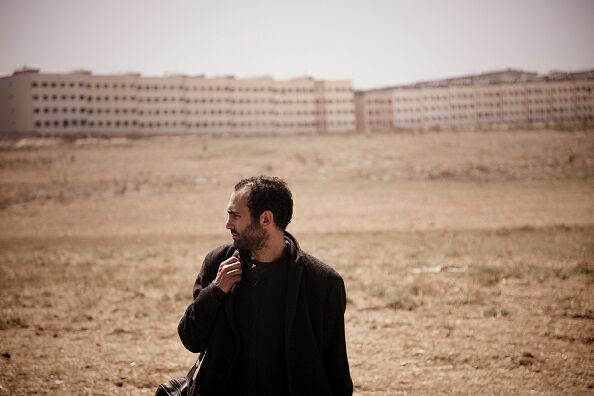 Danny, since Louverture Films has been developing a diverse set of global films, what kind of stories from and about Africa catch your eye and impact your decision making?

DG: Most compelling for me are issues of migration, the collapse of the nation state, the destabilizing of economies that lead to a great deal of internal conflict and general uncertainty. All the time we see boatloads of men, women, and children drowning on their way to places like Spain. So migration is a overwhelming issue that we are dealing with right now. What also happens in these contexts is that women will be at the center of orchestrating these stories. Women and children, families, are the most affected by the trauma of these kinds of events. So women as storytellers in their communities, women artists like Tala, all over the continent, will continue to offer a new way of visualizing what is happening in their communities.

Are the politics of gender and women’s experiences important to you, Tala, as a women filmmaker, is that something that you thinking about? Or are other concerns driving your narratives?

TH: Yes, I agree with Danny, questions of migration from Africa, and many places in the world, where people are on the move due to war, conflict and disenfranchisement, women will be, and are at the center of it. And it is time for women to be heard, but also in regard to issues of class, it is time that we stand at those frontiers, lead the charge, and tell our stories. Women, people, migrants, have the right to speak and essentially not to have someone else speak in our names. I always think of that quote by Aime Cesaire who said “No race possesses a monopoly of beauty or intelligence;” everyone has right to speak from their truth. So in any case, yes, I do think its crucial for women, we’ve been at the center of the home, and that is where the oral tradition comes from, and if there was ever the time to reclaim that, the moment is now. Beyond the dominant stories whether they be patriarchal or from other sources of entitled power, women can possibly tell not only new stories, but give us a new ways of seeing and being seen, jolting spectators toward new ways of looking at the world, and new possibilities.

Speaking of ‘ways of seeing,’ Tala, you were trained as a painter and I know your work as a photographer has received critical attention. Last night at the Q&A, you said it is not only about a film being beautiful, and yet, I was very struck by the beauty and aesthetics of the film. How does your experience with these other adjacent visual modes impact your filmmaking?

TH: Well, they are all tools, whether it is painting, using the camera, it all comes back to a way of looking at the world. This applies also to how you wake up, how you share space with our comrades, walk through a city, read political situations or a book of poetry, all can contribute in the making of an artistic work.  All of us are painters, I think, whether we are filmmakers, citizens, laborers, teachers—it is all about ways of looking at the world.

Ok, we are running out of time, so last question: Danny, as a Haitian in Diaspora, I would be remiss if I didn’t ask about your film project on the Haitian Revolution that was being discussed years back, any news on that?

DG: It’s still on my plate! I think it is the greatest story. I was just reading Edward Baptist’s The Half Has Never Been Told: Slavery and the Making of American Capitalism and he discusses how the Haitian Revolution completely transformed Western history. The only time it has happened in human history, the making of a nation from a slave revolt. Nobody talks about that, the only time, and for the large part it has been eviscerated out of history, because it challenges the narrative so many are invested in. But I am fascinated by the amazing and extraordinary capacity of those enslaved people to reimagine life, and to bring life, and to celebrate life. Those are the stories that Louverture Films seek to tell.

No one is coming to save us

The government of Zimbabwe has decided it does not care whether Zimbabweans live or die.

Ghana’s ruling party has proposed a new law to control the country’s public universities. The country’s academics are fighting it.

The media’s crisis on Ethiopia

Western media coverage of Ethiopia’s political crisis turns a blind eye to the grassroots movement behind the protests.

Local traditions of crisis management—especially those resistant to predatory capitalism—have largely been forcibly shed along the path to “development.” The age of COVID-19 is the time to recover them.

To fight unemployment we have to fight capitalism

Three activists from the Assembly of the Unemployed talk to us about the challenges facing working-class communities in South Africa.