Over images of children in Biafra (the breakaway Nigerian republic of the late 1960s), bloated by kwashiorkor, the solemn 1970s commentator narrates: “And the world weeps with them…” These are the opening shots of the documentary film, The Trouble With Aid, which screened on the BBC last week, a documentary by Ricardo Pollack problematizing the growth of humanitarian aid through an episodic look at the great crises of the 20th century: Biafra, Cambodia, Ethiopia, Somalia, Rwanda/Goma, Kosovo and Afghanistan. Clearly designed to give coherent shape to the critique of humanitarian aid and its discourses (as opposed to development aid) for a largely uninitiated audience, the film is neat and clear, but reductive. However, where it falters in its explicit intention — to untangle ‘the trouble with aid’, instead creating a whole new knot for itself — it accidentally offers us something far more interesting; that is, the reliance that humanitarian aid has on the moving image. Momentarily throughout, the film flattens the issue of aid to an issue of images, equating disasters to the illusory depth of films, while reproducing the image-reliant rhetorics it critiques through its own edits.

The film begins with the Biafran War, which it cites as the birthplace of humanitarian aid (with that claim the film is not alone). An incredible wealth of archival material illustrates the despair of the situation; the Biafran militia fighting for their independence, and the all-powerful Nigerian army brutally denying it, to the cost of thousands of Biafran lives. This first episode of the film, ‘Biafra: Weapon of Propaganda’ sets up the first problem of humanitarianism, as articulated by interviewee Alex De Waal: “The making of false claims is central to humanitarianism.” Next, it cuts to Patrick Davies, the Director of Propaganda for Biafra during the war, who recalls that the Biafrans first ‘advertised’ their political separatist aims, hoping that the West’s apparently democratic golden rule, the right to self determination, would move them to intervene. It fell on deaf ears. Next, they advertised that the Biafrans were victims of a religious pogrom. Again, silence. Finally, after hiring a PR company, they advertised famine, making ubiquitous the images of children with kwashiorkor, and suddenly, the world responded. In doing so, interviewees in the film estimate they prolonged the conflict by 2 years.

And then, as with many things if they are to receive attention in the West, it became de rigueur; Mick Jagger’s girlfriend sat in furs on a New York pavement signing a petition for Biafra; the ‘cause’ appealed to the cool mix of existentialism and anti-establishment attitudes that were prevalent at the time. It was an Easy Rider image for sympathy, and it worked. Episode by depressing episode, the film resurrects archival material of the ‘care’ staples of Western society, which are inseparable from TV media; the Blue Peter ‘Bring and Buy’ sale appeals in the UK, televised addresses from the glossy-haired John Pilger, Band Aid and Bob Geldof, the birth of the ‘cool to care’ attitude which relied on a non-political approach. Pollack is successful in showing how the post-war generation were desperately seeking something to do — “instead of going to war, we went to famine.”

We only have to remember the explosive #Kony2012 campaign to see how entrenched the bad habits of humanitarianism (the de-politicized representations, the white-saviour complex, the ‘cool to care’ attitude) are common-place in humanitarian media campaigns. In this sense, Pollack’s documentary charts how we arrived at #Kony2012, building a coherent case that it has been a series of compromises, a set of compromised but nonetheless ‘good’ people, that have often worsened and further complicated disastrous situations, primarily in Africa. 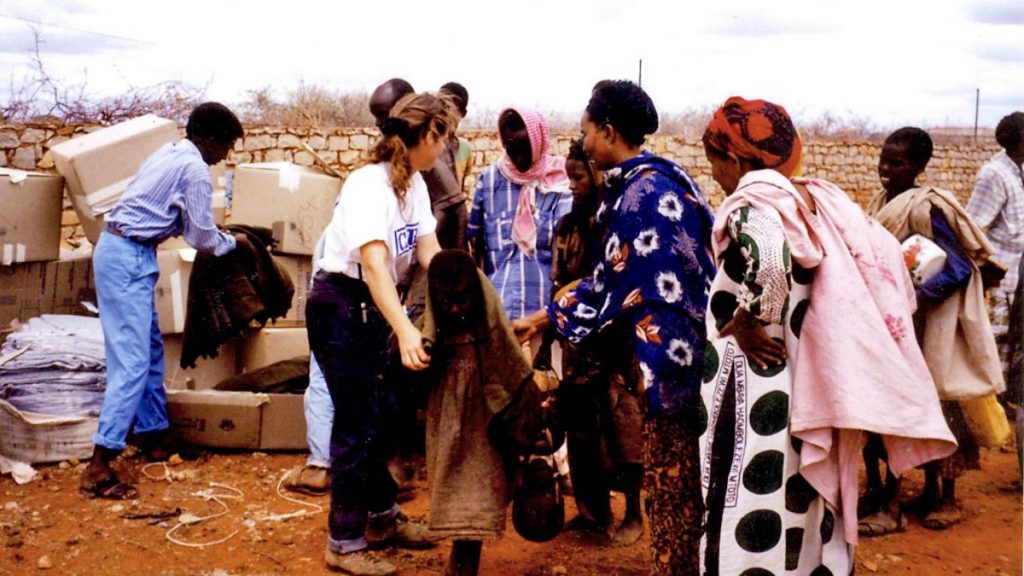 But this is the problem. The film opens by claiming it is concerned with what happens when “good people try to help in a bad world.” By setting up these abstract moral terms, the critique is already halted before it goes anywhere at all: in an episode on aid agencies feeling compromised in Goma (in the Democratic Republic of Congo) for providing care to suspected genocidaires — raising the issue of who deserves aid, and at what point an agency should retreat — the film’s critique feels flat because of the false good/bad dichotomy it has already set up for itself (incidentally, there is no mention of other complicating factors like the Congolese government, the Kabila insurgency or the UN). The suspected genocidaires in Goma, by the film’s standards, are the baddies, whereas the aid workers are the goodies. True or not, even in attempting to complicate the narrative by interviewing members of MSF and Care International about context and compromise, the film gets stuck in questions of neutrality, which it already seems to have undermined by its oddly apologetic invocation of a crude moral stance, that humanitarians are unequivocally ‘good’, just compromised by circumstance. But isn’t all humanitarian intervention circumstantial? And what about in Somalia, where members of the US army, engaged in a ‘humanitarian war’ (a contradiction in terms?), shot dead hundreds of people running towards a food hand out?

The film is composed heavily of archival material. Grainy footage of Nigeria in the 1970s shifts gradually to the striped-TV feel of amateur footage in the Kosovo camps. Cuts from newsreels, TV appeals, news features and observer journalists together build another portrait; of aid’s reliance on the unquestioned use of images of suffering. The footage is of course uncomfortable, but instantly recognizable. It returns here as a strange nostalgia. A lot of the Ethiopian footage — of hapless musicians crusading with their aid into the Northern regions of Ethiopia — is a painful reminder of the heady triumphalism and self-congratulatory concerts that fueled the ‘Feed the World’ movement. At one point in the documentary, the French minister for humanitarian aid (at the time) says: “It was a film”. Perhaps the history missing from this documentary is not necessarily how the humanitarian movement grew and wrestled with itself, but how the humanitarian movement grew in close relation to the democratization of moving image technologies; how footage could be sent back to the West, sitting on its coffers of money, food and guns, waiting to be moved by the next de-contextualized sequence on starving children and homeless families, to intervene only if the images were powerful enough. How else can we explain the selective ‘caring’ policy the West employs? ‘The Trouble With Aid’ interviews only a couple of Ethiopian and Nigerian people, who were on the receiving end of the aid. It’s hard not to think of Renzo Martens’s ‘Enjoy Poverty’ (read the AIAC interview) the much-debated film which encourages Congolese people to sell their poverty as a resource, given that it is a commodity that the West are willing to deal in, via aid agencies. Martens’s film damns the circulation of images too; he drives home the point that aid heavily relies on images of suffering, and by being acutely aware of his own presence in Congo, he illuminates the fact that ‘regular media’ does not deal with its own presence, and requirements, in other people’s suffering and the promotion of it. In the film, he suggests that Africans should harness their suffering and poverty, via images, as their market capital. Although problematic, some of the issues Martens raises are incredibly appropriate for Pollack’s film, which delves into the moving image archives of humanitarianism, but never once questions those image, or their capture, usage and circulation.