In the “new South Africa … miracles leave us exactly where we began.” So says John, Julie’s servant, in Yael Farber’s play, Mies Julie, playing at St. Ann’s Warehouse in Brooklyn, suggesting that little has changed in South Africa since the end of apartheid despite its promises of freedom and equality. If John didn’t point out that the play takes place eighteen years since apartheid’s end, and if Strindberg’s original setting of the play on Midsummer Night hadn’t become South Africa’s Freedom Day in Farber’s rendition, you could easily mistake the play for being set during Apartheid.

And this is obviously Farber’s point. Perhaps this is why Benjamin Brantley in The New York Times thinks that the play “speaks boldly about that nation today.” But its recent success in Edinburgh and now in New York where its run has been extended, probably tells us more about the way that audiences in the Global North like to think about South Africa than it does about the actual dynamics of the place today.

What does white America do when there is no longer a place with worse race relations than the United States? Convince themselves that there still is, of course. The conclusions about interracial desire that the play draws allow audience members to shake their heads when they leave the play: How terrible it is in South Africa! What a shame nothing came of Mandela’s great promise! The irony, of course, in this election year, is palpable. 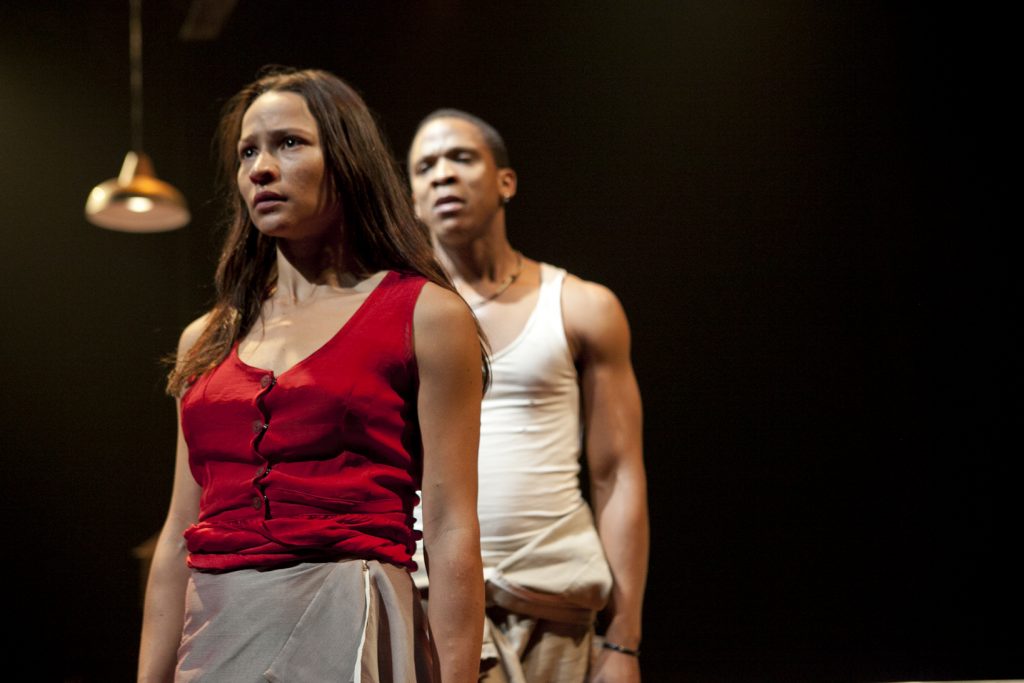 If you take the play as an example of current South African theater and literature more generally, you might think that nothing has changed there either. J.M. Coetzee’s 1977 novel, In the Heart of the Country revolves around a similar plot involving a lonely young white woman on a remote farm. But Coetzee’s novel made a lot more sense in the heart of apartheid than does Farber’s post-scriptum. From the angry but beautiful Boer woman who hurls epithets at her black servant—“once a kaffir always a kaffir”—to the groveling but muscular black servant who alternately calls Julie a “bitch,” and tells her he loves her, the action swings from one extreme cliché to the other, allowing for contradiction but not for subtlety. Farber’s stage directions only augment the play’s bipolar dialogue (she wrote as well as directed) resulting in exaggerated, near-parodic scenes in which the characters either stomp enraged around the stage, skip in joy, or violently slap one another about before the culminating sex scene which is as harried and high strung as the rest of the performance.

The whole thing looks exhausting. The actors do well under the circumstances, but fail to transcend the script’s shortcomings. When Mies Julie ends her life in a gratuitously violent and bloody act—in Strindberg’s original she walks off-stage with a razor—instead of being shocked as I suppose we were meant to feel, I simply groaned. Violent self-mutilation in response to having sex with a black man is not, thankfully, the response of most white South African women who do so. While suicide may have been the only recourse for an aristocratic woman with no property of her own who sleeps with her servant in late-nineteenth century Sweden, Farber’s rote application of Strindberg’s plot to contemporary South Africa suggests that what is needed are new narratives to better describe the country’s actual state of affairs, disappointments and all. While Mies Julie’s violence, anger, and sex, feed audience desires for the dramatic, a more responsible theater of the present might eschew such sensationalism, making room instead for depictions of the history, love, and sex of everyday relations.

Soccer academies in Africa sprang from European club interventions with varied success, but, as examples in Ghana prove, they can be sites of local, entrepreneurial spirit.

Why are Kenya’s ruling family trying to reinvent themselves as friends of Mau Mau so many years later?

Between melancholy, terror, and disillusion, Petit Pays is a groundbreaking and eye-opening take on one of the darkest pages of African history, one that is often misunderstood in the West.

The death of Paulo Lara warrants an appreciation of his and his family’s contribution to preserving the documented history of Angola’s liberation struggle.