In the beginning, we are addressed in quote. “This is a place where Death sometimes still warns of its passing. How? No one could answer exactly. It happens the day before, like a certitude that descends upon our bodies and minds…” Against a brooding shot of the breathing sea, cloaked in near darkness — our original womb — a baritone voice speaks, “A tale”. In unison a group responds, “Tell us”. The grave voice continues, “Once upon a time”, the group complies, “It really happened.” “Were you there?”, he asks. “It’s up to you to tell.” The sea collapses to a vacant black screen before being illuminated with a fluid, blood red nebulous, as if you are sitting in a red tent aglow from outside light. Alain Gomis has us and his protagonist born into his latest film: ‘Tey’, ‘Aujourd’hui’, today.

Satché (Saul Williams) awakes in his mother’s house. Lying on a bed, he touches himself tenderly on his stomach, he is here, but as he soon discovers, when he closes his eyes at night, he will leave with death. Gomis describes his film succinctly as ‘the kind of tale that takes place in an imaginary society in which death comes looking for someone’. Satché leaves his room, generous with memories in objects and photographs, to a mourning party reception. His mother clings onto him as his father releases her midwife-like clasp, “Be brave, be brave. Let him go.”

Having filmed in luscious colours, Gomis elevates naturalism through his visual diction to a kind of serene poeticism, which feeds the films impressionistic, magical realism. Stretching time in each scene, he allows the content to linger, asking the viewer to consume the film instinctively, emotionally and in fragments. Gomis allows the narrative to suspend itself in a collection of moments, a gentle cradling of the film’s unique temporality, as we explore Satché’s eulogy. 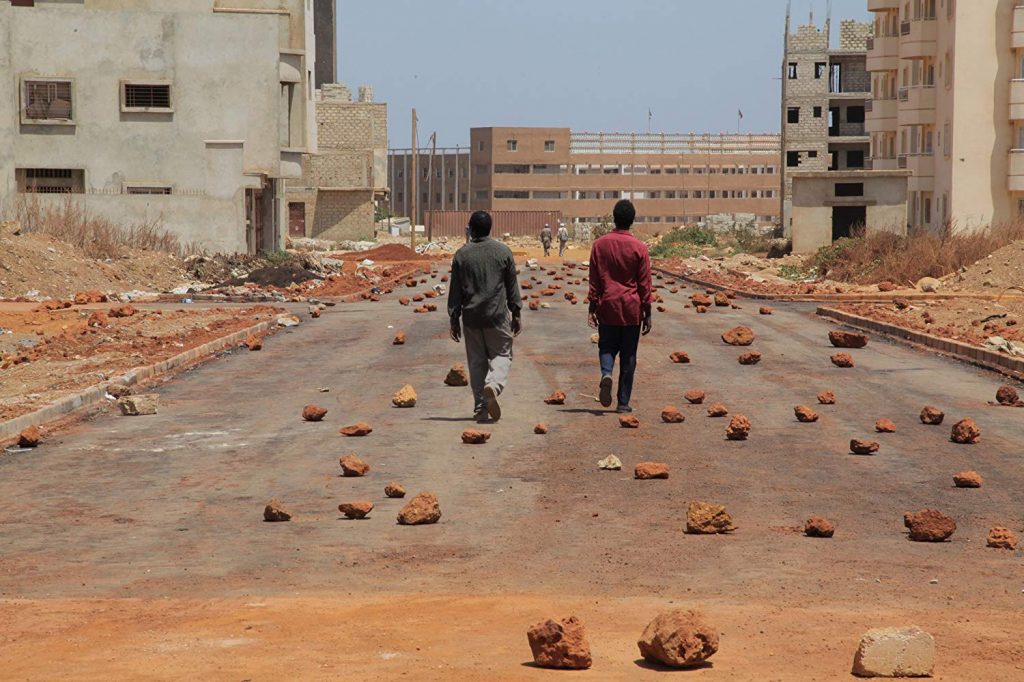 Satché meanders through an anonymous city in Senegal to what is most meaningful to him: his community, friends, an old but now dispassionate lover, his uncle and finally to his wife and children. Having returned from studying in the U.S., Satché perceives with childlike, wide eyes his surroundings as both familiar and unfamiliar. But the protagonist’s impending death catalyses his reintroduction to his ‘home’, sharpening his sight. Satché embarks on a self-reflexive journey to resolve his feelings of incongruity where “Time does not seem the same anymore, and suddenly he starts seeing the world with the eyes of a stranger — someone who is about to leave.” Carrying himself like a flâneur, Satché vibrates between: lightness and weight, dread and dream, burden and levitation. Confessing his emotions deftly upon his face, accentuated by Gomis’s economic use of dialogue, it is through Satché’s journey that Gomis dissolves these conceptual poles — of life and death — to a tender haze. Blending the codes and symbols of lightness and weight to produce a soulful warmth as one.

The narrative ebbs when Satché purposely visits his Uncle Thiemo (Jean Mendy) to ask if he will wash him for burial. While Satché lies on the ground motionless, his uncle demonstrates how he will prepare him for his soul’s departure. This reverential moment, both chilling and cleansing, allows Satché to accept his fate in entirety. After the demonstration, he stands and walks to collect himself; in portrait, we see a single tear left to run down his face. Expressing an Amor Fati, ‘love of one’s fate’, that within death, life is affirmed.

Satché stands stagnant on a street while Gomis temporarily surrenders his dreamlike colours for reality. A series of short vignetted scenes follow that feel like portraits in Satché’s mind as he gazes into his ‘home’. Three children dance in unison on a crowded road, a group of men argue and fight, a petrol bomb is thrown, a women shouts through the screen “You want to know the truth. The king’s sons are princes? The prince’s sons are thugs. There’s a gas and coal shortage. Even the teachers are on strike. What will become of our children tomorrow? We are fed up! Especially the women.” People bustle in a mass protest. Gomis reapplies his fantastical colour palette as Satché walks languidly, looking upon the disbanding protest. His innocence has dispersed from his face as he is once again joined with Sélé (Djolof Mbengue) who has lovingly shepherded him throughout the film.

The practical silence and enduring presence of Sélé throughout the film, is suggestive of him as author or mind of Satché, while Satché navigates his perception of ‘home’ through experience. Satché’s endeavor to re-establish himself within his ‘home’ during his last day on earth imbues the narrative arc with a meditation on identity, alienation and migration. So when his eyes droop shut while lying with his wife in bed for the last time, in death, through art, he is unified in mind and body. Dissolving the duality as his true identity and self are reconciled, but as his uncle asserted “No one ever finishes anything, we just stop.”