One of the more endearing attributes of Lagos, Nigeria is the markets. In varying sizes and forms, they attract multitudes from the region for various reasons. Wholesale, retail, technology, textiles, car parts, all sorts of meat, school supplies,  you name it. Lagos markets will satisfy your needs, plus some adventure to boot. Markets in Lagos include Computer Village in Ikeja, Alaba International Market, Idumota, Mile 2, Mile 12, Balogun, Oyingbo, among others.

One special market that is sorely missed is the old Oshodi Market. This market is known for its large size, diversity (providing for the rich, poor, local, expatriates, male, female, urban, rural, young, and old), as well as lack of coherence, Oshodi Market was Nigeria’s second largest market after Idumota market. Until early 2008, when Oshodi was still Oshodi, pedestrians and motorists found it impossible to move freely in the market due to the virtual standstill of walk and motorway ways by shops and shop-less purveyors of goods. 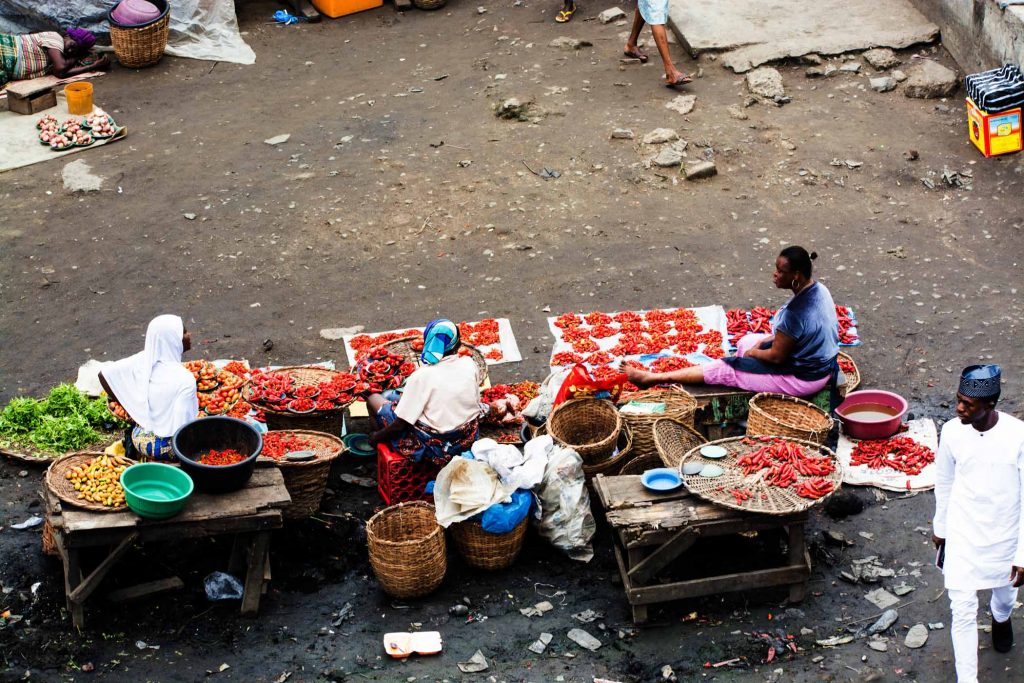 Old Oshodi highlighted the complexity of the city, showcasing the ingenuity of the people of Lagos in their use of the informal market in making a living. Oshodi was a market of legend where there was no room for any perceived sense of weakness by any and demanded a keen sense of sight and wit. This is aptly and beautifully described by Tosin Adeniran in a 2010 write-up in the Nigerian newspaper, The Nation:

Struggling to board a yellow mini commercial bus, Mr. Patrick Uwa (not real name), a businessman from Benin, did not notice when his wallet was picked from his back pocket. He got on the bus and at the request for the fare by the conductor, he started searching his pockets for his wallet. He explained his predicament to the conductor, thinking he would understand. But he was disappointed when the conductor told him that he would not allow him to alight if he did not pay the fare. Immediately the bus got to his destination, Uwa jumped down, pleading with the conductor who ignored his pleas. In a second, the conductor bent down and removed Uwa’s Italian leather sandals in substitute for the bus fare of N100 . As if that was not enough, he slapped his back, saying welcome to Oshodi as the bus speed off. That was the common scene at the ‘old Oshodi’.

This inviting allure of Oshodi was however abruptly brought to an end by the Lagos state government supposedly out to rid the state of “rowdiness, lawlessness and disorderliness”. Oshodi was a prime target to get this message across. The state’s Ministry of the Environment (MOE) on January 4, 2009, brought out the bulldozers and flattened all the tables, kiosks, and stalls. Eyewitnesses recount that Oshodi’s skyline was enveloped by thick black smoke from around 3 am till sunset on a fateful day. Hence, the end of an institution in Lagos. Memories, histories, nightmares, and hopes were all demolished in less than 24hrs.

The Oshodi market (the real deal) has sorely been missed by some and will continue to be missed. While one can see why this old maiden would not fit in the new over-priced metropolitan Lagos brand that Governor Fashola is attempting to build, it cannot be denied that Lagos lost an irreplaceable artery and pulse with the end of the old Oshodi.