Amid the unprecedented global ecological crisis, Africa still supports one quarter of the world’s biodiversity and the largest assemblages of megafauna. Indigenous Africans of the rangelands, desert, and forests have always protected their fauna and flora. Land where they exercise traditional rights has proven to be central for global biodiversity conservation. But today they are facing the threat of a colossal land grab by Western conservation agencies, and their corporate and state allies, who advocate to double the coverage of protected areas around the world by setting aside 30 percent of terrestrial cover for conservation by 2030.

Protected areas are the national parks, forests, game reserves, and other places from which states evict original inhabitants for biodiversity conservation. They already cover 15.73% of the terrestrial surface. The Global South accounts for 66% of that coverage, primarily located in Africa, the Caribbean and Latin America. Many African countries have set aside between 35%-42% of their national territories exclusively for wildlife and biodiversity compared to 12.45% in the US. Indigenous and human rights activists are sounding the alarm, comparing the 30×30 plan to the second Scramble for Africa, one that would further dispossess, militarize, and privatize the commons in Africa.

An overlooked yet critical perspective of protected areas is their primitive accumulation function to transfer wealth and immaterial values of nature from colonies to colonizers. They start with the violent dispossession of Indigenous communities, followed by militarized control over the territory, and commodification of lands and wildlife resources by the corporate imperialists. The 2022 book, The Violence of Conservation in Africa: State, Militarization and Alternatives, demonstrates why dehumanization and violence against Africans are permanent features of conservation in Africa, and how Western conservation agencies wield power to assault African states’ sovereignty, in order to gain political and economic control over vast areas rich in biodiversity.

The NGO African Parks embodies the growing influence of conservation driven by Western capitalists and their allies in the African political class. Founded by a Dutch billionaire, the agency acquired and manages 14.7 million hectares of land across 11 African countries in West, Central and Southern Africa. It has been at the forefront of the militarization of parks in Africa, recruiting rangers from local communities who receive paramilitary training from French and Israeli military personnel. African Parks is not unique.

Many conservation NGOs are led by Western capitalists who indulge their own private interests and bankroll platforms like Capitals Coalition to push ideas about the best way to save the last remaining African wildlife. Western financiers like Goldman Sachs and The Blackstone Group are working in unison with international conservation NGOs seizing on the biodiversity crisis to package predatory agendas under the guise of conservation. Yet the violence and sheer pace and scale at which conservation in Africa absorbs Indigenous lands to be integrated into the global capitalist system for commodification has gone vastly uncriticized. Why is that, and what forces sustain such an enduring yet insidious image of moral high ground in conservation?

The propaganda machine of conservation

Protecting wildlife requires an understanding of what we are protecting it from. Colonialism, capitalism, and white supremacy birthed this incommensurable ecological crisis including the rapid decline of wildlife populations. It should also be clear that protecting biodiversity dominates the framing of the Black Internationalism movement, while the Convention on Biological Diversity pushes an obfuscating vision of a global society living in harmony with nature that serves little more than to maintain the status quo ushered through a colonial and capitalist global order.

But the propaganda machine in the capitalist core has convinced its population that the poor African and their exploding population are the major drivers of wildlife extinction; that if the poor African, merely disgruntled by the crop raiding elephants roaming in their village, also benefited from conservation they would be motivated to protect wildlife. Never mind all the government resettlement policies, and state sanctioned land grabs by corporations that are pushing the poor African further into dangerous wildlife territory. The African rendered poor by ongoing colonial plunder and wanton expressions of domination. The impoverished African that we collectively deem as disposable, and so the one who must bear the brunt of turning their land into Empire’s private zoo. They deploy dangerous anti-African rhetorical devices using slogans like “African chainsaw massacre” and “Every African is a poacher…” and convince us that the best ally to save wildlife is the elite class who pays $800 a night to luxuriate in the African wilderness, and the trophy hunter who nearly decimated the elephant population. And so, they tell us that tourism can save wildlife while providing meager employment to the dispossessed Africans.

When conservation organizations are challenged, their response is to sell their position on higher ground by arguing that biodiversity conservation is an ethical necessity even with a legacy rife with racism, dispossession and the slaughtering of wildlife central to Indigenous cultures. The appeal of most well-intentioned Western conservationists to consider indigenous rights sounds like a plea on behalf of the voiceless that falls short of calling for full restitution of land rights, stopping the expansion of protected areas and disbanding militarized conservation. None of these accounts interrogate the entire colonial apparatus that reproduces circumstances where landscapes are emptied of people, and the African villager is paid crumbs to serve tourists, while the Western educated researcher incessantly theorizes about conservation policy misfits, and has Africans convinced that we have no choice but to negotiate with colonizers about issues on our lands.

Our media acculturation through movies like The Lion King and Out of Africa cement imaginaries of benign conservation with such tenacious reign over our imagination that doesn’t allow any critical analysis of who and what elephants and rhinoceroses really need protection from. Instead, they produce self-proclaimed wildlife defenders with narrow sets of interest focusing on single species conservation. As a result, mainstream conservationists—largely dominated by middle- and upper-class liberals of the Global North—adopt as their symbolic leader, White conservationists like Jane Goodall whose image has been rendered palatable, and non-threatening to corporate interest. Yet, they rarely contend with the forces that murdered the recalcitrant and uncompromising land and water protectors, such as Fikele Ntashangase and Berta Cáceres, who launched a full assault on rapacious corporations and their state allies to protect the ecosystems that give and sustain life for humans and wildlife. Instead, they pitch the tired narrative about empowering poor Africans and turning them into foot soldiers in their orchestrated war on wildlife. What is most dangerous about these reductionist takes is that voracious forces are seizing on the conservation-development nexus as a way of packaging predatory agendas under the guise of conservation, to acquire and control natural resources in areas of the Global South rich in biodiversity.

As we think about the future of conservation alongside the liberation struggles of Black and Indigenous peoples, privatizing and militarizing the commons to “protect” biodiversity have no place in our world. Instead, land should be restored to its original owners by birthright, where they can exercise traditional rights that have proven to be central in global conservation.

The struggle to protect land, water and wildlife from destructive forces is deeply entangled with the de-colonial struggle. Survival International has been at the forefront of the battle to decolonize conservation by working with Indigenous communities to protect their land and livelihoods, and offering a vision we should all draw lessons from to save the last remaining biodiversity hotspots.

The promise of platinum

Platinum holds promise for a net-zero future. But the promise of platinum cannot be founded on the broken promises endured by those who live in its spaces of extraction. 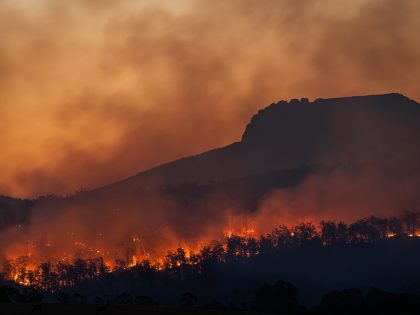 On this week’s AIAC podcast: After an upswing before the pandemic, the global climate justice movement currently looks stuck. What kind of climate politics can appeal to the majority of people?

A key part of Maathai’s work was how she creatively engaged with religious traditions, including Christianity and the Bible. Admittedly, her stance was somewhat complex.