March 3 marks the celebration of Africa Environment Day. Since 2012, this day is jointly commemorated with Wangari Maathai Day, in recognition of the life and legacy of the late Professor Wangari Maathai (1940–2011). With relentless energy and great vision, she devoted her life to protecting the natural environment and promoting sustainable development. Among many other accolades, in 2004 she was awarded the Nobel Peace Prize in recognition of her trailblazing work.

Maathai is widely recognized as a hugely influential environmental, political, and women’s rights activist. The Green Belt movement, which she founded, works with local communities, especially women, to conserve the environment and improve livelihoods. Since its foundation in 1977, the movement has planted over 51 million trees in Kenya alone.

Maathai also was a scientist—the first woman to gain a PhD (in veterinary anatomy) in East and Central Africa, and the first female chair of a department at the University of Nairobi. In 1982 she was forced to leave the university. She was welcomed back only in the final stage of her life and was appointed as chair of the newly founded Wangari Maathai Institute for Peace and Environmental Studies.

For Maathai, activism and academic work were not separate worlds. A recent book about her, Radical Utu, by Besi Brillian Muhonja, demonstrates that she was an organic intellectual and thinker, who developed critical ideas about indigenous African knowledges, democracy, gender equality, development, and social justice.

A part of her work, often overlooked, was how she creatively engaged with religious traditions, including Christianity and the Bible. Admittedly, her stance was somewhat complex. On the one hand, Maathai was critical of Christianity for its connection to colonialism, and for its continuing negative environmental impact. Christian mission, in her words, performed “acts of sacred vandalism” through which the sacred groves and trees of African communities were desacralized. This has allowed for a culture of exploitation of natural resources, resulting in soil erosion and environmental devastation. Maathai sought to reclaim and promote the worldview and spirituality of her own Kikuyu people and of other African indigenous traditions in which nature is considered sacred.

On the other hand, Maathai was and remained a Catholic, who claimed to believe in God and to be “a good student of Jesus Christ.” Among the inspirations of her faith were the American civil rights movement with its prophetic black Christian leadership, Latin American liberation theology with its radical support for those who are marginalized, and Christian environmental initiatives. The Bible was not only a source of personal inspiration but also a resource for enhancing environmental awareness. Doing so, Maathai recognized that most Kenyans, and indeed many Africans, today are Christian; they are familiar with the Bible and ascribe authority to it. Thus, in the Green Belt movement’s workshops with local communities, Maathai used many stories from the Bible that offer guidance on the way in which humankind is supposed to treat the earth and its resources.

Maathai’s book Replenishing the Earth is full of references to biblical texts, ranging from Genesis to Revelations. She creatively weaves them into her argument for a spirituality that helps humans to live in harmony with the natural world. The book also narrates an anecdote about Maathai preaching at a church. At that occasion, she used the symbol of the cross to encourage the congregation to plant trees. After all, she suggested, the cross was made of wood—a tree had been cut in order for Christ to bring salvation. Planting a tree was a way for Christians to express their gratitude to God.

For Maathai, identifying as Christian and reading the Bible was not at odds with reclaiming African indigenous religions and cultures. She considered these traditions to be compatible, as they both offered “spiritual values for healing ourselves and the world.” However, she does suggest that this requires a re-reading of the Bible and the Christian tradition, dissociating them from their colonizing and exploitative elements. In that sense, Maathai makes an important contribution to current debates about decolonizing Christianity in Africa.

Foregrounding Maathai’s use of the Bible as part of her community activism is of critical importance today. Kenya, Africa, and the world at large are facing huge environmental challenges. Maathai presents a model of creatively using faith-based resources to engage religious communities in protecting the environment. With about 60% of the population of sub-Saharan Africa identifying as Christian, Maathai’s environmental Bible can be an effective resource for promoting environmental respect and stewardship. 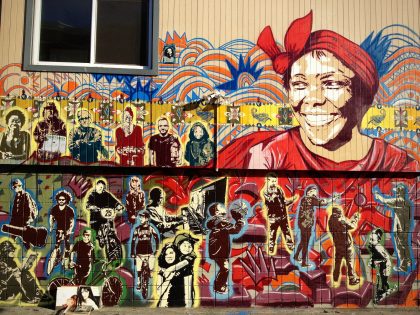 Beyond the Nobel Peace Prize

The Year of the Woman

2011 was the year of pro-democracy movements and they were largely pushed and pulled by women.

Wangari Maathai passed this week. The news of her passing inspired memories, praise, and reflection, especially among those who knew and worked with her, and among those Kenyans who grew up watching her …