I still remember Matadidi Show dancing, dressed like James Brown, in the first edition of FENACULT, the national arts festival organized by the Angolan Ministry of Culture in 1989, when I was 8 years old. Captivated, I watched the affair on television, as my parents did not allow me to go to the event. In my memory, Show is performing the song “Nkuwu” in his characteristic style of ostentatious funk dance backed by the sounds of Congolese percussion.

As part of the festival, kids and youth were mobilized into rehearsals—and, eventually, a performance—for the opening ceremony. This mobilization was accomplished through schools and the Angolan Organization of Pioneers (OPA, the youth group of the ruling MPLA party). At the time, schools and the OPA were linked to each other, all part of the same socialist system. The community engagement of schools and parents—with everyone else watching live on TV—was the result of the nationalist spirit of the time, a last sprint by the socialist government before losing its breath and acceding to multiparty democracy and market capitalism.

Twenty-five years later, in 2014, the government held a second edition of FENACULT. This time, the festival was an attempt to resuscitate the national feeling broken by 27 years of civil war and unequal development in an oil-rich economy. In the second edition, there were no longer kids, school groups, or parents. Instead, the opening ceremony featured 300 soldiers performing alongside professional dancers. The ostentatious use of oil funds in service of a certain definition of national culture replaced the funk and energy of the first edition. This time, FENACULT was composed of three main parts: a huge exhibition of Angolan visual art in an improvised tent created for the occasion at the Baía de Luanda, a train traveling through the country with musicians and artists, and cultural events in every province.

In Luanda, the Ministry of Culture organized three symposia. The first celebrated the life and contributions to culture of the country’s first president, Agostinho Neto, and the second did the same for José Eduardo dos Santos, head of state since his predecessor’s death in 1979. The third one, designated the “Symposium on Culture,” had panels on topics such as cultural policy, globalization, museums, and restitution, and included participants from other African countries and elsewhere. I gave a paper at that symposium that interrogated the role of the state in culture during Angola’s contemporary history. Until the end of the civil war in 2002, the socialist state had had a grip on culture that inhibited private initiative and markets. In my paper, I argued that moving forward, the state should assume the role of a regulator rather than a cultural agent. This question of the state’s relationship to culture remains relevant—and unresolved—in the Angolan arts landscape to the present day.

Surprised by the invitation to the symposium, I wanted to take advantage of the opportunity to share my ideas with the small group of people who influenced and decided national cultural policy. As an independent art curator at the time, I was deeply familiar with the visual arts scene and aware of the impact politics and the state had on the sector. I decided to argue for a better regulatory structure that would allow this sector to function without direct intervention from the Ministry of Culture. More specifically, I advocated for removing the ministry from an active role in arts management and events such as the very one in which I presented.

The symposium, which had a very official feel, took place at the auditorium of the Palace of Justice in front of an audience composed mostly of young college students. At the time, the palace was a recent building in the Cidade Alta neighborhood, around 200 meters from the Ministry of Defense and 500 meters from the President’s official residence on top of the hill. This is the oldest and most official quarter in the city, with pink and white buildings and clean streets—a place where, unlike the rest of the city, you won’t see trash bins or potholes. Against this background, the reception of my paper was not surprising: the responses ranged from disagreement to shock at the notion of not having the state in control of culture. In Angola, culture is the battlefield of the nation, more political than cultural, so to remove the state from that sounded like an offense.

A great deal had changed in Angola in the quarter century between the two editions of FENACULT. The second iteration happened 12 years after the end of the civil war—and seven years after the first Luanda Triennial, an event that engaged the international arts biennial model and which had begun to inscribe Angola into the globalized contemporary art world. Yet the official narratives about FENACULT and its purpose, propagated by the state-run media, seemed unchanged. The Jornal de Angola, the daily newspaper, reported on the conclusion of the event, proclaiming the country “a stronger Angola with Fenacult.” During the festival, the Minister of Culture at the time, Rosa Cruz e Silva, claimed that Fenacult exhibited “Angolaness” to the world. It wasn’t just the press narrative that was the same, but the content and format as well, with the emphasis on grand stadium ceremonies and the holding of symposia celebrating the cultural contributions of Angola’s political leaders.

In 1989, Angola was deep in a civil war. The socialist spirit of the ruling People’s Movement for the Liberation of Angola (MPLA) had not yet caught up with the new times. What already felt like dated slogans and a staid state-imposed national culture stood in for a dynamic policy or autonomy for the cultural sector. FENACULT, and cultural policy more broadly, served the ideological function of asserting a “popular culture” that narrowed the gap between the ruling class and the proletariat. In 2014, by contrast, Angola was at peace, awash in oil revenue that, thanks to opaque management and an artificially manipulated exchange rate, was extremely unequally distributed, creating a vast class divide. Yet, here again, it fell to culture to serve as glue for unity and peace. In both cases, culture had to work for politics.

Since independence, the official conception of Angolan nationhood has been based on the assertion of a unified population across the country’s geographic territory. The national anthem declares, “One people, one nation.” An independence-era slogan claims: “From Cabinda to Cunene, Angola is one country.” Culture, in turn, has assumed an auxiliary or instrumental role to this idea of unity. Yet the fixed space ascribed to the nation belies an anxiety: the nation is not stable, but at risk from war or political difference. Both iterations of FENACULT portrayed the MPLA party leadership as central to national history and to cultural unity. Even as the state proclaimed the country’s diversity, it simultaneously erased any reference to distinct regional and ethnic political histories.

With the end of the civil war and the ensuing oil boom came changes in Angola’s cultural economy, which was at first separate from and gradually integrating into the globalized economics of the international arts sector. Among other innovations, a growing number of local collectors began to invest in the work of local artists. By 2007, a new venue and vehicle for thinking about culture in Angola’s social formation had come into being in the form of the Luanda Triennial, which aimed at creating a movement for the visual arts in the country.

Following its first edition, the Luanda Triennial held two further editions, in 2010 and 2013. After the third edition, the format changed to focus more on performative arts and music, assuming a year-round program. In the process, it introduced new debates regarding nation and culture. It turned to a global practice focused on singular, contemporary artists, an approach in stark contrast to pronouncements about what constituted Angolan art and culture. This provoked unintended responses. The reaction from the Cokwe people to a series of billboards exhibited throughout Luanda in 2006 that used images of the Pinturas da Lunda, a book by Portuguese colonial ethnographer José Redinha, was an example of this tension. These billboards contested the narrative of the nation as a single people and a single history and claimed a particular story for Cokwe people. In response to the depictions, protests erupted in Angola’s interior; meanwhile, the official press attempted to silence them. This episode laid bare the absence of other narratives beyond the coastal colonial histories of assimilation and creolité so dear to state power.

The Luanda Triennials and their repercussions painted a much more complex and lively picture of culture in the country than the “Train of Culture” promoted by the Ministry of Culture in FENACULT 2014. In fact, the survey exhibition organized in 2014 failed to show the growth of the visual arts sector and its expanding international footprint. A great example of this expansion is the awarding of the Golden Lion award at the 2013 Venice Biennale for the Angola pavilion, which was organized not by the state but by Paula Nascimento and Stefano Pansera (Beyond Entropy Ltd), and which featured the photographic works of artist Edson Chagas. As a result, far from gathering together national culture production, FENACULT 2014 instead exposed a split in the visual arts scene. The split was not just conceptual but aligned culture producers into two distinct groups. On one hand stood the National Union of Plastic Artists, the national visual artists union and a remnant of Angola’s single-party days. On the other hand was a group of young artists that claimed the right to engage critically with the country’s history and political narratives, exploring themes beyond nation and identity.

Today, the gap between the public discourse on culture and the on-the-ground reality of the arts and culture sector is deepening. The former has been reproducing a top-down construction of culture, while the latter has been recreating itself by engaging socially and politically with the country’s many contentious issues—not just in visual arts, but also in music, cinema and theater. The state still propagates a static concept of “Angolaness” and assumes the position of custodian of its intrinsic values, maintaining and legislating a view of culture as a vehicle of such ideals. The contemporary arts scene, however, more strongly resembles an installation of Angolan artist Paulo Kapela: a collage that navigates meanings of nation alongside questions of national culture, history, and traditional cosmologies. 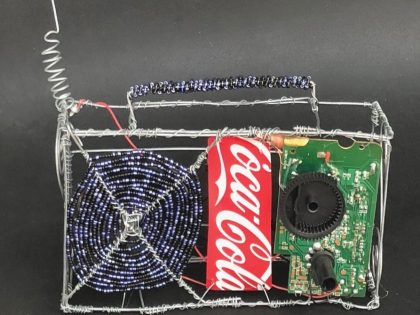 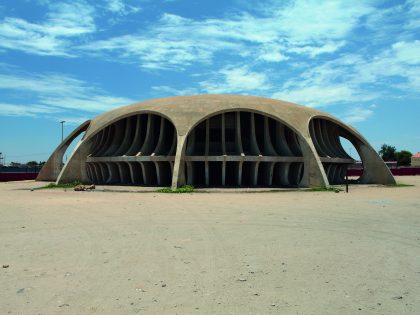 Angolan Cinemas: Past and Present Tense

Cultural spaces and historic patrimony have not fared well during Angola’s post-war reconstruction and development. 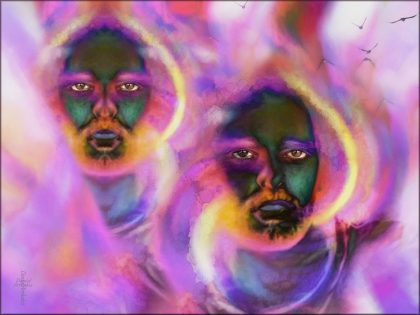 Should the tipping point against the MPLA – in power since independence – arrive in Angola, there are some activists ready to hit the ground, running. 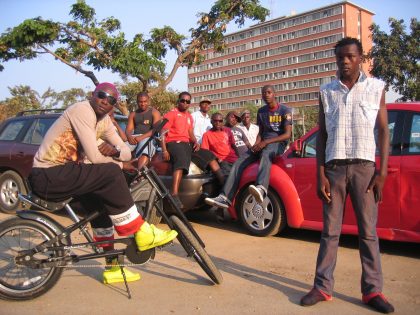 How a music genre is selling Angola’s oil boom.