This post updates ideas first raised in posts first published on the Africa at LSE and CIHA blogs.

In 1988, the renowned Ghanaian historian Albert Adu Boahen gave the J.B. Danquah Memorial Lectures, named for an important figure in Ghana’s anticolonial struggle and an opposition figure after independence:

It is my firm belief that no appropriate and effective development of any country can take place, nor can any government be properly kept on its toes or made aware of what is really going on, until and unless there is free flow of information of all sorts, free and public discussion of national issues, and free and frank exchange of views at all levels of society; in other words, unless this culture of silence is broken.

At the time, Ghana was a military dictatorship.  We wonder what Adu Boahen would make of the current attempts by the elected government of Ghana to control the country’s public universities through a proposed new law.

The Public University Bill (PUB) attempts a work-around of the provisions in the constitution that bars the President from serving as chancellor of a university or appointing officers to institutions of higher education, research or professional training. The PUB seeks to effectively make the President the head of all public universities by having him or her name the chancellor, nominate the chairperson of the University Council, and appoint the majority of Council members. In addition, the bill allows the President to dissolve the Council “in a case of emergency.”  This could result in the top administration of universities being suspended during a change-over of government, as happens already in many public institutions in the country. Moreover, a sitting President might conceivably manufacture such a crisis for an immediate political end.

Even more inexplicably, Clause 47 of the bill states, “The Minister [of Education] may give directives on matters of policy through the Ghana Tertiary Education Commission to a public university and the public university shall comply” (emphasis ours). These directives cover a range of activities from research collaborations to the establishment of new academic programs. This clause, together with others, diminish the autonomy and capacity of public universities to respond to changing research priorities, funding opportunities, and student and faculty needs in dynamic national and global contexts.

The government’s justifications of this executive take-over of universities are far from convincing. The claim that universities are too diverse and that many have “veered from their core disciplines” does not acknowledge that all changes to university curricula, administration, and governance are done within existing laws and are overseen by regulatory institutions such as the National Council for Tertiary Education. The government’s second rationale is that universities have evidenced financial improprieties and must, therefore, be better regulated. The idea that public universities would fare better under the direct control of ministries and politicians who are regularly embroiled in corruption scandals is almost farcical. This claim also ignores the existence of the many laws and institutions whose job it is to address instances of financial malpractice in public institutions.

The bill comes as the global coronavirus pandemic has compelled universities around the world to re-examine current forms of teaching and learning and, importantly, to envision a future for higher education that is more equal, more effective, and less pervious to shocks. By contrast, the PUB, if passed into law, would set higher education back several decades. It has compelled Ghanaian academics to move to defend basic academic freedoms that we have long taken for granted.

The 1992 Constitution of the Fourth Republic of Ghana (which ushered in the reintroduction of democracy in 1993), in many ways reflects lessons learnt from the attempts of autocratic and military regimes in Ghana to impose political control on civil society, including academia. One of the worst episodes was in 1978 when university students, medical doctors, lawyers, and other professional groups expressed their disaffection with Ghana’s military dictatorship, the Supreme Military Council, through a series of general strikes. The regime responded with harassment and intimidation; for example, doctors, many from the University of Ghana’s medical school, were chased out of their official residences by weapon-wielding government-sponsored vigilantes. University students in Ghana, as is true in many other African countries, have historically been a political force and have, consequently, been the target of government aggression; on occasion, police have been sent onto university campuses to quell student protests, including recently in 2018.

The 1992 constitution—the third reiteration since Ghana became independent from British colonial rule in 1957—acknowledges this history with an explicit recognition of “academic freedom”, among other fundamental rights, placing Ghana in a minority of 14 countries on the continent with such a provision..

Why, then, has a democratically-elected government persisted in pushing a bill that has been harshly criticized by many in Ghana, including the Ghana Academy of Arts and Sciences, as “dangerous”, “retrogressive”, and “totally unnecessary”?

The answer is, in a word, control, as the Public Relations Officer of the Ministry of Education admitted in an interview. The PUB is one of many pieces of legislations introduced by the Nana Akufo-Addo administration that would revise the internal governance structures, regulatory structures, and admission processes of educational institutions, and grant the government unprecedented control over all levels of the educational system.

Another explanation that has been suggested by some for the current administration’s pursuit of political control of the education system lies in the free secondary education policy it hastily introduced in 2017 and that will produce many high school graduates chasing limited spaces in the country’s public universities. The bill would allow the government to more easily overcome institutional resistance to the admission of students far in excess of the capacity of public universities. Cynics have also suggested that the government’s attempted take-over of universities is partly motivated by the current government’s ambition to name the University of Ghana after J.B. Danquah, who belonged to the United Party (UP); the New Patriotic Party (NPP), the party now in government, grew out of the UP tradition.

Adu Boahen, who gave the 1988 J.B. Danquah Lecture quoted at the start of this article, was himself a founding member and one-time presidential candidate of the NPP. He led a fierce, and often lonely, fight against a “culture of silence” in public spaces, including in academia, under the military government of Jerry Rawlings which founded the current opposition National Democratic Congress (NDC). In an interesting twist, former President and NDC presidential candidate in this year’s general elections, John Mahama, has made a public pledge that, should the bill be passed into law, he would immediately repeal it upon assuming office.

Unwilling to have academic freedom be reduced to an expedient political campaign issue, Ghanaian academics have mounted a vigorous campaign to have the bill withdrawn by the executive or rejected by parliament. Let it not be said of us that we were silent when the status of education in Ghana stood in jeopardy. To quote Elizabeth Ohene, journalist and former Minister of State, Ministry of Education, Science and Sports, in her book Thinking Allowed, “Of what earthly use will a clause against tyranny be when we the citizens as we have proved in the past, are very ready and willing to surrender without a fight against the gradual encroachment on our rights?” 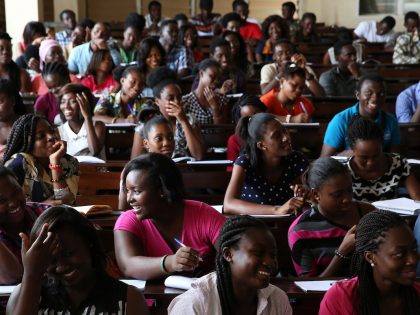