In 2013, the family of Omar Blondin Diop organized a memorial ceremony for him, forty years after his death on the island prison at Gorée. Centuries before, the island had been a major transit point for ships transporting enslaved African captives to the Americas. As part of the commemoration, Diop’s relatives installed a portrait of him in his former cell, now an exhibit of Senegal’s main historical museum. The picture captured him in 1970 just after he had been expelled from France, where he had been living for a decade. When the photograph was taken, he was a 23-year old student-professor in philosophy. Like many other students at the time, he was swept into the May 1968 protests. But five years later, he was more than a radical dissident—Omar Blondin Diop became a myth. When he died in prison fourteen months into his three-year sentence for “being a threat to national security,” authorities in Senegal claimed he committed suicide. Most had good reason to suspect he was murdered. Ever since, his family has tirelessly demanded justice be done, and artists alongside activists have taken the lead in holding on to his memory.

The assassination of Omar Blondin Diop cannot be understood as an isolated incident, but as one tragic episode in a long series of tenacious acts of state-led repression in Senegal. Decolonization in Africa has often been the story of the birth of newly independent states in the 1960s. However, the persistence of foreign interests backed by national governments became a common sight in former French colonies. Well into nominal political independence, burgeoning autocracies largely stifled revolutionary prospects of emancipation from capitalism and imperialism. We don’t often hear of resistance movements in Senegal during Léopold Sédar Senghor’s rule (1960-1980) because his regime successfully marketed the country as “Africa’s democratic success story.” Yet, under the single-party rule of the Progressive Senegalese Union, authorities resorted to brutal methods; intimidating, arresting, imprisoning, torturing and killing dissidents. Omar Blondin Diop was one of them.

Omar Blondin Diop was born in the French colony of Niger in 1946. His father, a medical practitioner, had been transferred from Dakar, the administrative capital of French West-Africa, to a small city near Niamey. He did not hold radical positions, but colonial authorities suspected him of anti-French sentiment because of his involvement with trade unionism and support of the socialist French Section of the Workers’ International. The metropole monitored what it labeled “anti-French elements” because of their fear of growing anti-colonial movements. Once Blondin Diop’s family was allowed to return to Senegal, he spent the better part of his childhood in Dakar. At the age of 14, he settled in France, where his father enrolled in medical school.

For much of the 1960s, Blondin Diop lived in France. He spent most of his secondary education in Paris, where he attended a prestigious teachers’ college and pursued his study of classical European thinkers, from Aristotle and Kant to Hegel and Rousseau. There, he began frequenting leftist circles. This is a time when anti-capitalist movements in Europe drew inspiration from China’s Cultural Revolution and strongly opposed American military interference in Vietnam. Usually, Africans who pursued activism in France focused on politics from their home countries. Blondin Diop, for his part, had a foot in both worlds. Shortly after hearing about the Senegalese activist, radical filmmaker Jean-Luc Godard selected him to act in the film, La Chinoise (1967). In 1968, the 21-year-old student-professor actively partook in debates organized by far-left groups. Inspired by the writings of Spinoza, Marx, and Fanon, he cultivated theoretical eclecticism—in and out of Situationism, Anarchism, Maoism, and Trotskyism, he never exclusively held onto one given ideology. (You can find clips online.)

Due to his political activities, Blondin Diop was expelled from France to Senegal in late 1969. Alongside other Senegalese comrades who had studied in Europe, he participated in the Movement of Marxist-Leninist Youth. The grouping later gave birth to the influential anti-imperialist front And Jëf (To Act Together), suppressed and forced into hiding until the early 1980s. Pushing back against formal structures, Blondin Diop promoted artistic performance. He developed the project of “a theater in the streets that will address the concerns and interests of the people,” closely related to Augusto Boal’s “Theatre of the Oppressed.” Expanding on art’s revolutionary potential, Blondin Diop wrote:

Our theater will be a collective and active creation. Before playing in a neighborhood, we shall know its inhabitants, to spend time with them, especially the young people […]. Our theater will go to the places where the population gathers (market, cinema, stadium). […] It is especially important that we make whatever we can ourselves. […] Moral conclusion: Better death than slavery.

Independent Senegal was also a neocolonial space. Senghor had initially opposed immediate independence, advocating instead for progressive autonomy over twenty years. So, when he became president, he regularly called upon France’s support. In 1962, Senghor hastily accused his long-time collaborator Mamadou Dia, President of the Senegalese Council of Ministers, of attempting a coup against him—Dia was later arrested and imprisoned for over ten years. (Among others, Dia served as the first Prime Minister of an independent Senegal.) In 1968, when a general strike broke out in Dakar, the police suppressed the movement with the help of French troops. By 1971, Senghor’s embrace of France seemed to reach its peak with the state visit of French president Georges Pompidou, a close friend and former classmate. For over a year, Dakar had been preparing for Pompidou’s 24-hour stay. On the official procession’s main route, authorities rehabilitated roads and buildings, attempting to “invisibilize” the city’s poverty.

To young radical activists, Senegal’s reception of the French president was an open provocation. A few weeks prior, a group inspired by the American Black Panther Party and the Uruguayan Tupamaros set fire to the French cultural center in Dakar. During the actual visit, they attempted to charge the presidential motorcade. But they were caught. Among those convicted were two of Blondin Diop’s brothers. He, too, believed in direct action but was not involved in planning this attack. He had returned to Paris a few months earlier, after the lift of his entry ban. Distressed, Blondin Diop decided, with close friends, to leave France to train for armed struggle. Aboard the Orient-Express, they crossed all of Europe by train before arriving in a Syrian camp with Fedayeen Palestinian fighters and Eritrean guerilleros. Their plan was to kidnap the French ambassador to Senegal in exchange for their imprisoned comrades.

Two months into military training, Blondin Diop and his comrades left the desert for the city. They were hoping to garner support from the Black Panther Party, which had briefly opened an international office in Algiers. A split within the movement, however, forced them to reconsider. After swinging by Conakry, Guinea, they moved to Bamako, Mali, where part of Blondin Diop’s family lived. From there, they reorganized.

In Novembre 1971, the police arrested the group days before President Senghor’s first state visit to Mali in over a decade. Intelligence services had been monitoring them for months. In Blondin Diop’s pocket, they found a letter mentioning the group’s plan to free their imprisoned friends. Extradited to Senegal, he was sentenced to three years in prison. For the more significant part of their days at Gorée, detainees were not allowed to leave their cells. To minimize interaction, experience of daylight was restricted—half an hour in the morning, another half hour in the afternoon. Days became nights, nights were endless, and torture was the norm.

Omar Blondin Diop was reported dead on May 11, 1973. He was 26 years old. The news came as a bombshell. Hundreds of young people stormed the streets and graffitied the capital’s walls: “Senghor, assassin; They are killing your children, wake up; Assassins, Blondin will live on.” From the very beginning, the Senegalese state covered up the crime. Going against official orders, the investigating judge started indicting two suspects—he had discovered in the prison’s registry that Blondin Diop had fainted days before the announcement of his death, and the penitentiary administration had done nothing about it. Before the judge had time to arrest a third suspect, authorities replaced him and closed the case. Every May 11 until the 1990s, armed forces would surround Blondin Diop’s grave to prevent any form of public commemoration.

For decades, Omar Blondin Diop has been a source of inspiration for activists and artists in Senegal, and elsewhere. In recent years, exhibitions, paintings and movies have revisited his story, one which sadly resonates with contemporary politics. The authoritarian methods deployed by Senegal’s current administration illustrate how impunity feeds off of the past. President Macky Sall’s regime has repeatedly sought to suppress freedom of demonstration, embezzle public funds, and abuse of its authority. So long as governmental accountability serves no other purpose than an attractive concept to international donors, practices from the past are bound to live on. In Senegal today, people are still imprisoned for demonstrating; activists like Guy Marius Sagna are time and again intimidated, arrested and unlawfully detained. In this context, the state has unsurprisingly refused to reopen Omar Blondin Diop’s case. Nonetheless, as his family’s saying goes, “no matter how long the night is, the sun always rises.” 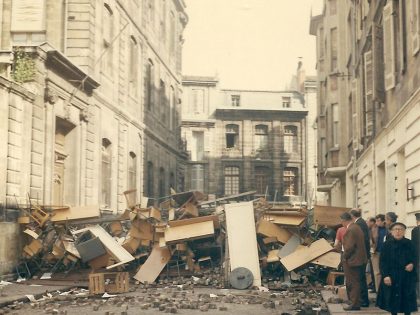