The CHALE WOTE Street Art Festival in Accra has grown over the last four years, expanding to new audiences in Ghana and across the world, particularly through social media and word of mouth. In 2015, the crowds came out in full speed and so did the corporations.

Local authorities estimate that more than 30,000 people participated in the now four-day event, a fact that clearly appealed to at least five multi-million cedi companies who set up shop ad hoc at the festival without prior approval or authorisation from the festival organisers.

The companies that targeted the 2015 festival without going through the proper procedures of vending, include Red Bull, Vodafone, Hello Foods, Blue Skies and Bel Aqua.

Red Bull vendors gained unauthorized entry into the festival and left branded cars at the entrance on Sunday, August 23. Vodafone vendors walked through the festival wearing branded vests selling recharge cards to customers. Hello Foods employees wore branded T-shirts and passed out flyers to festival-goers. Blue Skies set up a vending truck at the entrance of Seaview Hotel on Sunday, August 23 after being told several times by the organizers to leave. Bel Aqua took images from the festival and created an advertising campaign on their social media platforms branding their water.

What makes these exploitive practices even more appalling is that more than fifty small to large-scale businesses were legitimately represented at the festival as vendors in food, fashion, design and technology, having paid for space to operate and share their products and services with patrons.

This kind of corporate exploitation isn’t new to the arts on the continent though. There’s a long global history of well-resourced companies hijacking work and recognition from artists in order to sell to customers. Particularly on the continent, it is a difficult terrain for art creators who must navigate life often with little or no financial support for their work.

Many corporations operate quite differently when they do business on the continent. Africa is seen as a resource extraction mine and the relationship with art is no exception. In many ways, artists in Ghana are treated no differently than mine workers who are far removed from actually enjoying the profits obtained from mineral production. Art is also a natural resource that can transform the life of a nation. An art economy is developing in Accra, and albeit small, it is also consistent. All the more fascinating is how such developments are largely happening outside of state and corporate support.

Ghana is on the verge of a cultural economy explosion and artists have been the center of this shift, creating a new eco-system and network for creative entrepreneurs. CHALE WOTE is an independent structure, built through the energetic efforts of groups of artists, to ensure it takes off each year.

So when high net worth companies gain unauthorized entry into the festival and market their products and services to attendees, it demonstrates a lack of respect for the festival and participating artists. This is evident in their unwillingness to pay for rightful access to the festival or the use of works by artists. Would these companies try such things within the western countries they also do business? 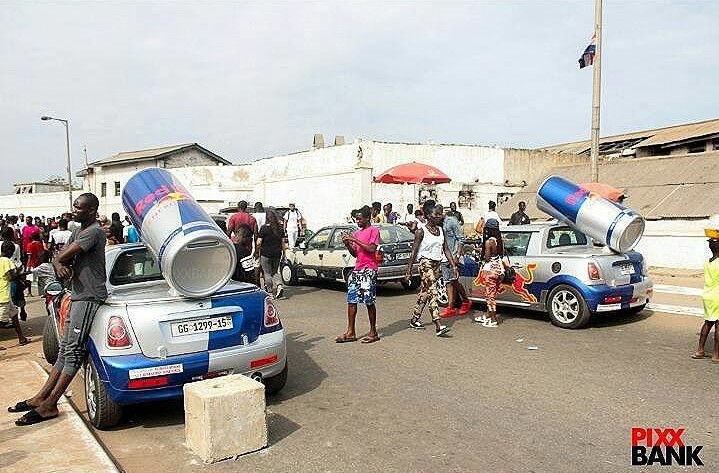 For CHALE WOTE, this is not the first time we have encountered this phenomenon. Last year, after negotiations went sour with Guinness, the company hired bloggers to attend the festival and snap photos of the artwork and events, as a way to add fuel to the #madeofblack campaign launched in Ghana the following week. Airtel Ghana also used a mural created by Jason Nicco-Annan during CHALE WOTE 2014 in a commercial that has been screening since last October. Unfortunately, neither the festival organisers nor Nicco-Annan were contacted for permission to use this work in the commercial.

Such actions, particularly by big business, exhibit a blatant sense of entitlement to the work of artists who are, in turn, treated with neglect and impunity. This amounts to theft, a persistent stealing of the intellectual property and livable wages entitled to artists. This dishonest practice does not acknowledge the time, energy, and cost that the organisers and artists have committed to the realisation of CHALE WOTE each year. The artists are often not recognized by name, their work is not portrayed accurately, and they are not contacted for payment for the use of their work in commercial advertising.

What’s even more disturbing is how images are lifted easily and associated with products and services that may be misaligned with the artist’s intentions and morals. Artists’ messages are being compromised through association with the selling of particular products Furthermore, why is consent not the first place to start? It is it not okay to continually take from artists without any recourse.

The exploitative behaviour of corporations goes against the very vision and mission of the CHALE WOTE Street Art Festival, which is to provide a platform to Ghanaian artists to create, collaborate with international artists, exhibit and make a livable wage from their work.

We’re left with no choice but to call out these predatory capitalist practices for what they are. Cease and desist with the tomfoolery corporations. African artists are not pawns.

Working alongside many others, we are relentless in our pursuit of justice.