I generally have the expectation that every so often something racist and problematic from South Africa will show up in my Facebook feed. But even when I think I’m ready, it’s impossible to ever be truly prepared. Last month it was the slave ship ironing board designed and manufactured by the the Cape Town-based company Maid in Africa which I had never seen or heard of before. And, just a few days ago it was the ad below, posted on the Facebook page Westville Buy, Swap and Sell.

The original advertisement was posted onto the page by a man from Durban, South Africa, but disappeared after a number of people shared and critically commented on the post. He writes: “Anastasia has worked for us for 27 years, she cooks, cleans, is wonderful with animals (she sings to our puppies when she bathes them)…” Then, in order to ease middle class fears based on the assumption that all domestic workers are thieves, he certifies: “She is completely trustworthy, we have never locked valuables away, and nothing has ever been missed”. He explains that the reason for the post is that they are relocating (Australia? England?) and he is hoping that “someone in the Durban North or Pinetown area needs an Anna”. AN Anna!?

The page Westville, Buy Swap, Sell is mostly dedicated to the selling of household appliances, furniture and other objects and “Anna” is advertised here as another commodity – a ‘black’ female body rendered object to be used and discarded when no longer needed. An in-depth analysis is needed to contextualize the historio-social power relationships between ‘black’ women and ‘white’ men in South Africa, but it is clear that however well-meaning, this man has not considered his position in a country with a social history entangled in violent narratives of objectification, paternalism, patriarchy and othering. As many others have already commented, the language in this advertisement is both patronizing and paternalistic.

This is further made evident by his response to the woman who read the advert and felt it necessary to call him out on it by trying to have a conversation over the phone. His response?:

I am amazed that a black woman phoned me this morning and had an argument with me stating that it was not appropriate to have Anna advertized on Facebook… Typical racial shit. I have had a guts full of the racial attitude of some black people …

This is exemplary of the blinding privilege of South Africa’s ‘white’ middle and upper class which has found new means of subjugation through online community groups. 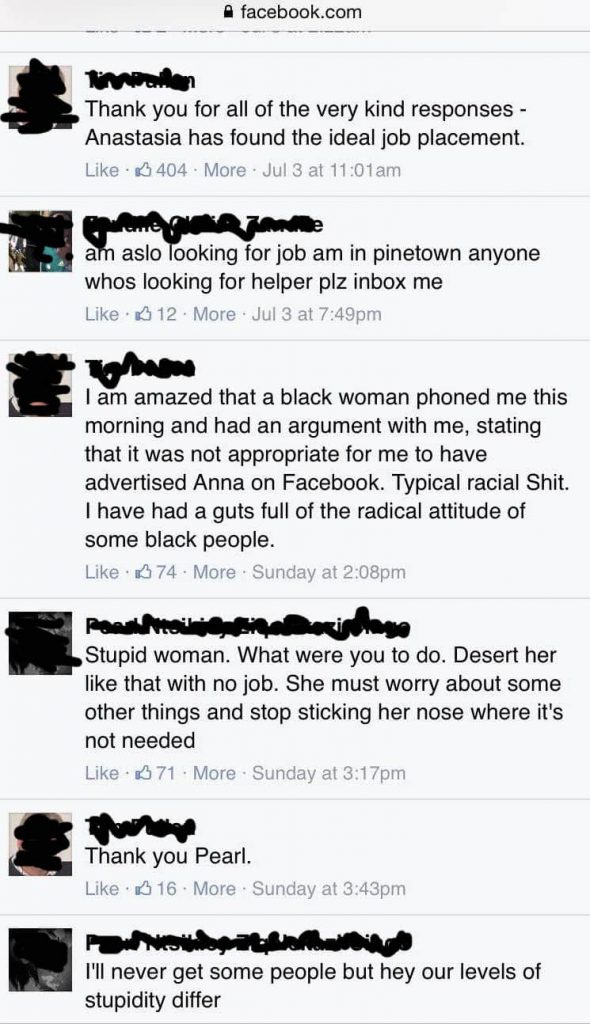 Other examples of this are the online neighbourhood watch and community policing forums which often use racial profiling and discriminatory language to talk about (mostly perceived) perpetrators of crime. These supposedly private forums have been uncovered by blogs like Suburban Fear which highlight racial paranoia amongst middle class ‘white’ South Africans. Similarly, on the Maid in Africa Facebook page the owners have responded to criticism of their designs by claiming that their art is activism and subversive. Like the poster of this advertisement, they believe that they are ‘doing good’.

It’s concerning too that there are people who validate the blindness and denialism expressed on these forums through attempts at delegitimizing claims of hurt or discomfort from people with similar experiences and subject positions. This demonstrates incredible ignorance at a time when race is at the forefront of many conversations in South Africa, The US and elsewhere in the world. The validation allows the oppressor to award someone as good or smart for supporting the status quo, while dissenters and critics are dismissed as ‘too sensitive’ or ‘dangerous’ to society. As one Facebook user puts it:

My question is: to what extent do you even have the apparatus to understand the trauma caused to the black psyche when stumbling across a black body on a buy, swap and sell page? Furthermore, if you do not understand it (which I am assuming you won’t entirely) does that make the pain felt by those expressing it illegitimate?

Meanwhile in Brazil, where the same practice of posting of one’s domestic worker on Facebook groups is common, São Paulo rapper Emicida proposes an alternative scenario:

War and no peace in Southern Cameroons

The longue duree of the conflict in the Southern Cameroons, the rise of the current Ambazonian movement, as well as the dismal prospects for conflict resolution.

What to do in Peru

Peru’s leftist president, Pedro Castillo, was impeached and arrested last month, triggering nation-wide protests. This week on the AIAC podcast we discuss what comes next for the divided nation.

The revenge of the subalterns

The second ‘Black Panther’ film is a fierce critique of the West’s (neo)colonial adventures in Africa and the Americas.

The art of virtue signaling

For French President, Emmanuel Macron, recruiting various African intellectuals turned out to be a key asset in trying to shift the Françafrique narrative, while simultaneously protecting French interests on the continent.