As most young ambitious filmmakers, I of course decided that my first feature length film would be an epic sci-fi post-apocalyptic piece that was somehow going to have these incredibly deep Terrence Malick roaming camera type moments in the Namibian desert. Complete with African narration mouthing something deeply profound about black existentialism in the face of certain death. But at the same time we were gonna have these swashbuckling warriors complete with afrocentric costume vibes and future neon space shit battling our sadistic baddie who just happens to have a German accent. Not that there are any colonial metaphors here. Anyway, suffice to say we’re still trying to raise the gazillion dollar budget and in the mean time I’ve sort of acknowledged that I might do a slightly smaller film first. You know, something that takes place entirely in an elevator, or something similar, before taking on the impossible.

Whilst trying to raise funds for my sci-fi extravaganza I quickly realized how small we were. Not just the fact that I simply don’t get the right hits when googled or IMDB’d, but that our story about a bunch of blacks in Africa going on an adventure, the apocalypse, colonialism, no white leads, etc — it just wasn’t big enough. Or rather it just wasn’t white enough. I was told by a sales agent in Cannes that she’d rather we’d replace our black lead with a dragon. A dragon, yes a dragon! In another meeting an excited Canadian producer was ready to sign on the dotted line provided I insert a terrorist plot in the film and a plane full of Europeans stranded in the desert. This went on for some time. I knew we had a fresh original take on the old mass produced apocalypse thing but the gatekeepers just weren’t buying this story so long as it took place in an African context. I realized that these sort of films simply don’t get made. Ever. The black voice in cinema occurs on the margins and is filtered, distorted, watered-down, negotiated, corrupted. It’s as if Hollywood operates as brothel-keeper to the omnipresent empire. You only have to watch Exodus: Gods & Kings to witness how  stories set outside the West are skewered so as to preserve the myths that justify Eurocentricity.

What I found was that the most damaging of these myths is the idea that Africa is the bogeyman — Full of both exciting and depressing examples of thugs, rapists, druggies and flashy hustlers. This myth allows the west to ascribe all its fears, whether real or unfounded, on Africa to justify white supremacy. The most notable films to have been made by or staged in Southern Africa have all been directed by white men. They include The Gods Must be Crazy (1980) dir. Jamie Uys; Mr. Bones (2001) dir. Leon Schuster; Tsotsi (2005) dir. Gavin Hood; District 9 (2009) dir. Neil Bloomkamp; Jerusalema (2009) dir. Ralph Ziman;  Zulu (2014) dir. Jérôme Salle.

When Frantz Fanon wrote his seminal work Black Skin, White Masks, he presented a sociological study of the psychology of racism and the dehumanization experienced by the African diaspora. He suggests that black people experience a trauma related to an unconscious indoctrination from a young age that teaches them to associate “blackness” with “wrongness.” This is experienced in a variety of ways: Through the workplace, society, media, and elsewhere. My primary concern is that as a Namibian filmmaker, I still find cinema’s depiction of black masculinity as hyper violent, one-dimensional, poor, diseased, unduly sexual and antithetically opposed to white mainstream examples of “goodness.” By decolonizing the screens Africans might experience the world without the limitations imposed by centuries of dehumanizing constructs of “blackness.” In what remains a Eurocentric patriarchal world whose foundations are built upon the subjugation and disenfranchising of mostly black and brown populations, such a “new” reality remains out of reach.

Jérôme Salle’s Zulu gave us yet another exoticized African despot with a mostly colonial narrative: Angry natives, diseased black children; shanty towns; a heroic white male; a broken black man; a lustful black woman; a beautiful untainted white woman; machete wielding thugs; and a few white supremacists. Ali (Forest Whitaker) has renounced his ethnicity. Or as writer J E Kelly puts it “he has discarded his ethnicity, to overcome not only his experience of violence but an inherent tendency of his people to beat on the drums, perform war dances, and of course, act violently.”  For in this Zulu there are no lion skin donning warriors, instead we find a neutered man unable to sleep with his girlfriend and incapable of voicing his frustrations with both past and contemporary South Africa. In a word, emasculated. For the patriarchy to succeed it thrives on a kind of infinite virility, therefore on a genital level the castrated Whitaker represents a kind of sexual revenge. An insurance against black superiority. There remains very little room for an honest engagement with what being black truly is in contemporary South Africa. 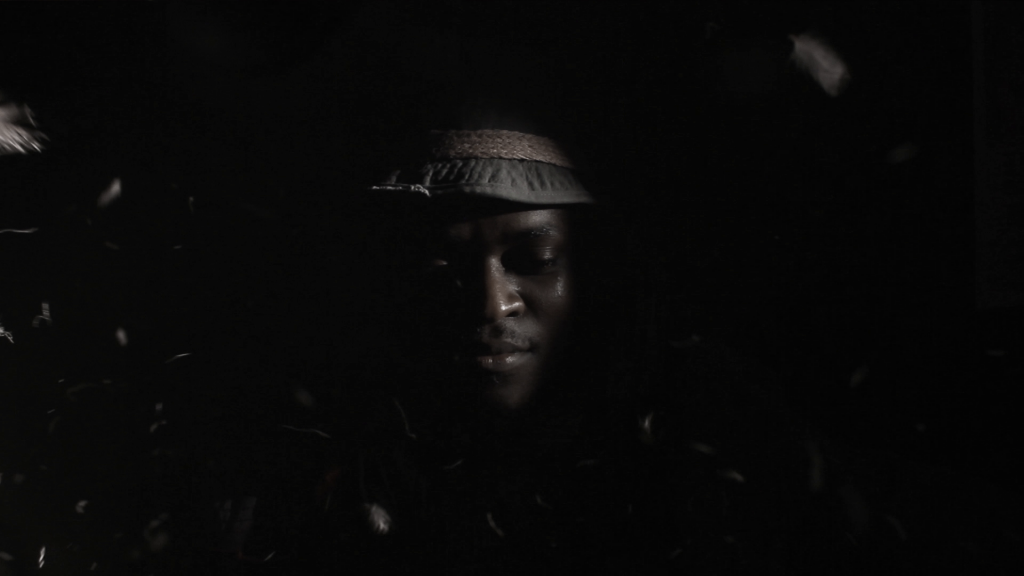 Current socio-cultural attitudes towards identity seem more strongly influenced by economic factors rather than simply racial implications. It is only the idea of Benedict Anderson’s “imagined community” masked today in South Africa as the “rainbow nation” or in Namibia as the policy of reconciliation that thinly holds together this faux republic. By taking a closer look at the portrayal of black masculinity in African films, and the fact that these films are made by white male filmmakers one might consider how they contribute to Fanon’s assertion that the black man sees himself not through the eyes of a black man but through the mask of a Eurocentric construct. How then could I have been so naive as to expect a sales agent in Cannes to wholeheartedly embrace my vision. She too, was seeing through that old mask. The one that encourages a watered down synthetic kind of culture. The culture of empire. The problem with empire is that it creates a one dimensional world rather than a polycentric one. Therefore it does not concern itself with what a different voice might look like. The fact that our films are still formulated by this one dimensional view means that the majority of our populace remain, not just economically disenfranchised but, culturally under represented.

The trials of black filmmakers like myself are simply a reminder of the importance of nurturing our systems here at home. We must find ways to develop and nurture a more imaginative African cinema. While we all wish to have our films screen at festivals around the world and in cinemas abroad we must also be allowed to make films on our terms. By doing so we have the opportunity of rewriting the script that has so often cast black men in damaging degrading roles on screen. It is a call to decolonize not just the continent but the screens as well. Let us commit to deconstructing every film in order that we might learn more about ourselves. We must pay close attention to how we portray each other on screen, so that the films we make might breathe new life into old tropes and on screen representations of “blackness.” With this we might help to restore and re-imagine Africa.

We’re actually being exploited once again

Mozambique should not move forward with extractivist mega-projects. They always contribute to serious violations of human rights, cause irreversible damage to the environment, and deepen the climate crisis.

To give the horror a name

The dissonance between what is communicated through local and international propaganda machines and what is actually taking place across the streets of Sudan.

The politics of elegance

German historian Daniel Tödt wrote a history of the Congolese évolués. In this interview, he talks about the historiographical interventions of his book and the role of Patrice Lumumba in the history of évolués.

Uganda’s most controversial and disruptive politician

What if the social media conditions of 2021 existed in 1981? A group of New Zealand writers tweeted the damned 1981 Springbok rugby tour as if it was happening now.

Corruption is a class project

Different factions of South Africa’s ruling elite are implicated in looting and profiting from the state. South Africans should take an attitude of a plague on both their houses.

Swallowed by the archive

53 years after it was first made in 1968, the Ghanaian filmmaker King Ampaw’s short film ‘Black Is Black’ celebrates its inconspicuous premiere.

Abdulrazak Gurnah and the afterlives of German colonialism in East Africa

Gurnah’s Nobel Prize invites us to ponder Germany’s colonial past between the Scramble for Africa and the First World War in what is now Tanzania, Burundi, and Rwanda.

What does China want in Africa?

On this week’s AIAC Talk: China’s engagement with Africa is much debated. What exactly does it want on the continent?

The ultimate end of decolonization

Islamic scholarship in Africa and the meaning and end of decolonization in the work of religious studies scholar, Ousmane Kane.

The return of Patrice Lumumba’s remains must not be an occasion for Belgium to congratulate itself, but for a full accounting of the colonial violence that led to the assassination and coverup.

If you hadn’t noticed, we were on our annual break from just before Christmas 2021 until now. We are back, including with some inspiration.

On this week’s AIAC Talk, Will Shoki and Sean Jacobs discuss the history and politics of the African Cup of Nations football tournament.

In South Africa, the old endures and the new is nowhere to be seen. What is to be done? Public intellectual Steven Friedman helps us make sense.