On Thursday, 13 March 2015, at Cape Town’s Company Gardens, during the Infecting the City Festival, a public arts festival in the City of Cape Town, something unspeakable happened. The widows of the Marikana Massacre victims (the August 2012 police killing of 34 striking platinum miners in South Africa’s Northwest Province), in a play titled Mari and Kana, were trying to wake up their husbands from their graves by yelling at them. Marking the gravesite, in front of the Iziko Museum, were thirty-nine white crosses laid out on the lawn.

During the play, the dead miner’s restless spirit circled above the Company Gardens. Even now, days after the crosses have been removed and the actors have long left the stage, the chilling atmosphere set by the play still hangs there.

The performance took place in front of the Iziko Museum, under the invasive statues of colonial rule. The space allowed the performance to be expansive, spreading out on the lawn. The play was haunting and convincing such that it became convincing that the miners were really lying in those graves. The play depicted reality with such preciseness that parts of it became the reality it was depicting.

The Infecting the City festival turns city streets and architecture into galleries and performance spaces, the everyday city walker and art coexist in the city streets, influencing or hindering each other’s movements, or completely rejecting each other. The festival, by virtue of confining itself in the city, is not without its problems of inclusivity. People who live far from the city have to come to the city to experience it. With Cape Town’s Group Areas Act mapping, this is particularly hard to do, even impossible, even though the majority of them converge in the city to access public transport, they are often in town for a limited time, so limited in fact that they are always running to the public transport terminals to catch an earlier bus, train, taxi home. That the festival took place during the week, only spilling to the weekend by its last day, made it extra hard for people to attend.

Long before the play was scheduled to start, the audience gathered around the lawn to see it, some were seated, some stood and others walked around in doubtful gaits, anticipating it.

During the delay, to while away time, I made my own doubtful gaits, to nowhere in particular. Behind the food stalls was the new garden plot.

Many centuries ago, at the same venue, a horror occurred here. The first was when Jan Van Riebeeck came and appropriated the land, named it after the Dutch East India Company and set it up as a vegetable garden. The second horror happened when historians erased the Khoikhoi, original inhabitants of the gardens from the history books.

The horror has unfortunately not stopped. The City of Cape Town recently completed a garden plot in the Company Gardens; construction to the new garden plot which began construction in February 2014. The new plot was constructed using Dutch colonial gardening principles. Its open stone-lined irrigation channels are also designed after the Dutch “leiwater” water channels. The city named the new garden plot section, the VOC Vegetable Garden (after the Vereenigde Oost-Indische Compagnie).

Mari and Kana was presented by Theatre4Change Therapeutic Theatre. The cast was made up of Aphiwe Livi, Azuza Radu, Thembelihle Komani, Thumeka Mzayiya, Abonga Sithela, Slovo Magida, and Lingua Franca.

On the festival programme, Mari and Kana, are described as “Mari and Kana invite us to experience the emotional journey of losing their fathers: The work explores attempts at finding consolations for those left behind by the protagonists’ brothers, sons, uncles and fathers after the Marikana Massacre. The 39 graves presented in public space allow audiences a more intimate and active engagement with the subject.”

On Friday evening, during its second performance, speaking to the director, Mandisi Sindo, the plot, he told me, was a narrative of two children, Mari and Kana, coming out of jail and finding their mothers grieving for their dead fathers. Sindo explained to me that the purpose of his theatre group, Theatre4Change Therapeutic Theatre is to help people heal. 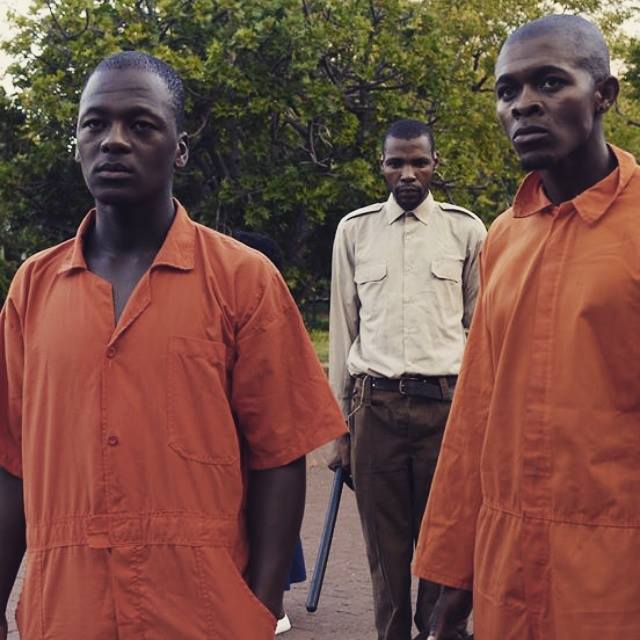 To an extent the performance does this but also it does something else, something more terrifying than helping people heal. It opens wounds that have not healed.

When the actors ran frantically from one grave to the next, looking for their loved ones, shouting all the thirty-nine people who were massacred in the Marikana Massacre, screaming at them to wake up, one did not experience the feeling of healing but grief, anguish and the spirit of the dead circling around.

Even after the performance ended, the crosses never became mere props in a play. One could not walk on the lawn, where they were and not feel like stomping on the spirit of the dead.

Azuza Radu and Thumeka Mzayiya, the two leading actors were not concerned with the technicality of acting or entertaining the audience, this is not to say they do not how to act or entertain. Their acting was very real such that they were not simply playing widows looking for their husbands. When they kneeled on their husband’s graves, screaming and cyring at them to wake up, one wished they could walk to the stage and comfort them.

The play made its way into one’s heart not only with the dance but also with the text. The lyrics and the poems were poignant. The poetry was delivered without the accent of poetry or the dramatisation of dramatic theatre.

“It is you black police.

He will never send us money.

He will never write us a letter.”

The text of the music still haunts me many days later after the show. It echoes and echoes in the back of my mind, like a voice faintly and continuously yelling in the dark.

The play had no denouement because it would have been cheating its own narrative. The way it ended was with a song of healing, with an upbeat and somber lyrics.

“The day of the sun rising is coming.

The heaven is not going to rain and thunder forever.

Heal my son. Calm down my son.”

Long after the actors had left the stage, the audience had dispersed, and the stage was cleared of its props, I was left staring into the empty space where the play had taken place, reimagining it, dismissing it, attempting to abandon it there and not take it with but the play is still replaying in my mind, over and over again, action by action, haunting me to remember the Marikana Massacre.