First let’s get the PR out of the way: This week, we launched Latin America is a Country (, our subsection checking for American media images of Latin America and to explore those linkages (political, cultural, economic and otherwise between the continent and our fellows across the Atlantic).

This has nothing to do with LIAC: A contestant in a Colombian beauty pageant was asked “Who is Nelson Mandela?” Her answer: “The founder of the beauty pageant.”

It turns out African NGOs receive only 4% of the $3 billion of Gates Foundation money earmarked to end hunger–the rest is spent in rich countries.

Kim Kardasian broke our Facebook account. Let us explain. The cover of Paper Magazine’s Winter 2014 issue featured featuring Kardashian in various modes of undress, including when she balances a champagne bottle on her butt. On the cover. Paper said it wanted to “break the internet” (see the pun) with the images. There wasn’t much original about the shot. The one with the champagne bottle was a remake of an image from 1979 with a naked black model. That image is not without controversy. It evoked how Sara Baartman was portrayed in European media in the 19th century. Which is how Grio ran a post, “Kim Kardashian doesn’t realize she’s the butt of an old racist joke.” We reposted the link on our Facebook page. Which is how Facebook sent us this: 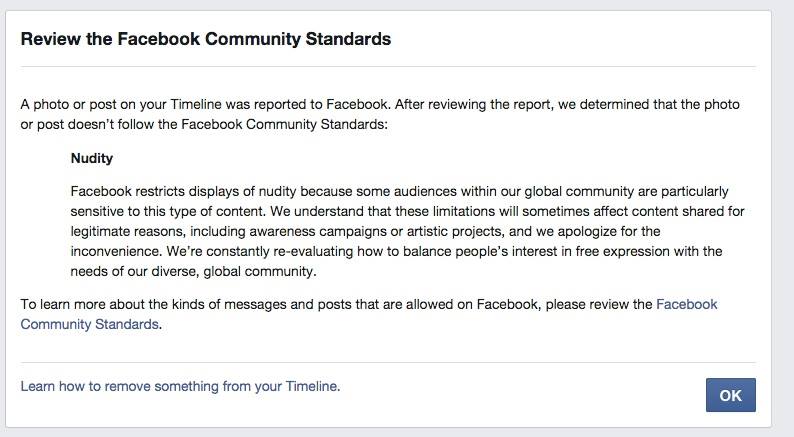 We remembered the murder of Ken Saro Wiwa (sentenced to death on November 10, 1995 by Nigeria’s military junta for questioning oil profits and government corruption) and learned–surprise, surprise–from Royal Dutch Shell that a 2008 Oil spills in Bodo, Nigeria were larger than initially anticipated. Shell used to say the spill was about 4,144 barrels. They did not say how much bigger they think the spill is now. The people of Bodo, who is suing Shell in a case about to return to court, say its the equivalent of 60,000 barrels of oil. We were of course shocked by this news.

Chinua Achebe, who passed away in March last year, would have been 84 today.

Cape Town, South Africa, is not just the capital of the Mandela Ray Ban “sculpture” (and no, it’s not okay that the “artist” got permission from Mandela’s foundation) and anti-black racism. Like this. Sisonke Msimang provides some context here (on Daily Maverick) and so did T.O. Molefe over on News24 here.

This clip is both hilarious and sad for the ignorance of some American radio broadcasters. Watch the presenters of The Breakfast Club – Envy, Angela Yee and, especially, Charlamagne tha God, show their ignorance about Africa and the internet. Watch.

Finally, who still watches Saturday Night Live, except the next day on social media? That’s where you see that delicious spoof of fundraising appeals.