Pitcho Womba Konga hails from Congo but moved to Belgium at the age of seven. As an artist he is a co-founder of Skinfama, a Brussels-based collective instigating urban hip-hop culture. You might know him from his 2003 solo album Regarde Comment or from that other beauty he dropped earlier this year, Crise de Nègre (with the addictive single ‘Anges Noir’). But this month he got us hooked to the Héritage project.

Pitcho gathered twenty-three other Belgian artists from the Congolese diaspora and came out of the Sumo Studio with this album that is as hybrid as its makers.

“There is the heritage of the métissage, the reflection of the fact that somehow we are the hybrids – the mixture of something but we don’t know of what. We are just who we are. A bit like the image on the cd cover.” Pitcho introduces us to the pigiphant – an image linking the European city to the weight of the daily questioning of its Congolese heritage. Standing in an empty room, there’s lots of space for the pigiphant to create something. And so Pitcho and the others did. Rather than smoothly joining this year’s cinquantenaire ‘celebrations’, they staged a meeting-place between different personalities. “The history of the independence is not a story of a person but of the whole world.”

“The idea about the project has been in my head for some two, three years now but I didn’t know how to get it started. I didn’t know whether I had to contact the artists first, or the museum, or to find a studio… Frankly, we have been very lucky in between the moment of us finding our first partner and the moment the album came out. To be honest, I think we needed less than a month. Everything went very fast and intense because everybody felt involved.

“The collaborating artists were chosen based on their talent, their different implications and artistic engagement. For a project like this, it’s obvious we are not looking for a hit but rather to move the people. This project somehow is a round table – done our way. Every artist had a carte blanche when it came to the text. I just did some artistic follow-up. I was there more to question the form. With the project we never had the idea to ‘celebrate’. More to reflect. A moment of pause to allow us to look around, to question both history and ourselves.”

Slam poetry sides with reggae on Héritage while more softly spoken words comfortably sit next to some seriously funky hip-hop. And the message is palpable: “We owe it to our memory / Not necessarily looking to move / But to see ourselves clearer / In the mirror of history.”

This is really good stuff.

Here’s a longer interview on the project (in French) with Pitcho: Part one, two, three and four.

Since colonization, Africa has provided its best raw materials for the global North. Can countries finally break this pattern?

What does the expansion of artificial intelligence in warfare look like in West Africa and other US military outposts?

Then make the intimate connection between the horror unleashed on Europe’s Jews and the preceding centuries of atrocities perpetrated by the “Enlightened” West on those they colonized and enslaved.

The new movement against apartheid

There is a lesson in the struggle for South African freedom: South Africans seeking solidarity understood they were speaking to specific audiences, not to an undifferentiated global community, and they strove to meet people where they were. 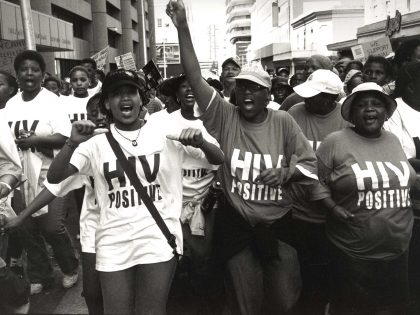 The demobilization of the South African masses

What do we know about the potential for new kinds of social movements in South Africa?