The recent goings-on in Ethiopia, particularly those of the last few months, have left many puzzled as to what exactly happened to the Ethiopia of 2018—an Ethiopia that promised major political transformations and even took a handful of steps to that effect. Both the ongoing displacement and killings of minorities in regions such as Oromia, Amhara, and Beneshangul-Gumuz and the ongoing war in Tigray—labeled by the federal government as enforcing law and order—are disturbing. Toward the end of 2020, the federal government started waging what it startlingly called a “law enforcement operation” in the Tigray region, branding the Tigray People’s Liberation Front (TPLF), the leading partner in the ruling Ethiopian People’s Revolutionary Democratic Front (EPRDF) between 1988 and 2018, as “a criminal organization and vowing to destroy it.” From media coverage of the events, we have learned that some veterans of TPLF were caught and brought to court while others were killed. The hunt and its accompanying promise to bring the perpetrators to justice continues today; both the war and the legal procedures of those who have been caught are still ongoing at the writing of this post. The humanitarian crisis and the danger of famine in Tigray have become alarming to the international community, while the Ethiopian government seems to turn a deaf ear to humanitarian pleas and pressure. One wonders where we got it wrong while actually trying to right the sociopolitical ills that the country has inherited from a troubled federal experiment and authoritarian rule since 1991, and a violent imperial history that preceded it.

If we take a closer look at Ethiopia’s political history, particularly in its moments of transition, a familiar pattern of relying on the criminal justice system to solve political problems can easily be detected. For instance, in November 1974, upon seizing power, the Derg (then provisional military government) ordered the killing of 60 high-ranking officials who served in the monarchy. They justified this action by labeling the individuals as criminals as attested to by a statement from the provisional military council. “The executions,” the council said, “were a political decision taken to mete out justice to those officials of the previous government who had thrived on corruption, maladministration and a “divide and rule” policy.” The Derg also decreed that the rest of the detainees would be tried in a military tribunal. A new government, led by the TPLF/EPRDF, came to power after ousting the Derg in 1991. Again, the regime resorted to the language of law. The first step the EPRDF took was to hunt the perpetrators and bring them to court. These events, which journalist John Ryle described as “the first large-scale human rights trial of recent times,” unfolded on a grand scale: the entire former leadership of the country was under indictment for genocide and crimes against humanity. On both the discursive and practical levels, there is continuity between these three events. The criminalization of political problems and the attempt to solve them through the court system is a consistent trait of these moments of transition. All three mobilize the law; with a particular  commitment to preserving a preexisting law. They believe in the courtroom—which, ironically, they control—to deliver justice. By this account, justice for victims partly depends on the removal of those who are now defined as perpetrators from the political realm, because they are reduced to being criminals, not political actors with constituencies. Only the victors are legitimate political actors; they claim to mete out  justice and are thereby absolved of any responsibility for partaking in the violence. All three regimes in post-imperial Ethiopia, sideline the main issue—that is, the unresolved political problems—while relying on the seeming universality and neutrality of the law.

Resorting to the criminal justice system instead of seeking political solutions through the intricacies of the political process justifies further violent actions in the interest of maintaining law and order. As a result, the political goes unscrutinized and the victors simply operate within the existing structure instead of introducing more profound change. This simply shows that—as Mahmood Mamdani cautions in his new book, Neither Settler nor Native: The Making and Unmaking of Permanent Minorities—a “Nuremberg Trial” inspired approach to solving politically driven violence is inadequate. The courtroom in fact reinforces the vicious cycle of violence by dichotomizing political communities as either victims or perpetrators, thereby defining new enemies. Most of the sociopolitical and economic problems that necessitated the change, such as the quest for democracy, equality, freedom, respect of human rights, and economic development, remain largely unaddressed. Unless Ethiopia is willing to give a new way of resolving political differences a chance, the vicious cycle of violence will continue unabated. As Mamdani suggests, there has to be room and preparedness to change rules and to be open to new political orders. Relying on the courtroom to solve political problems only serves the interests of those in power, and helps them maintain their position by creating enemies around which they can galvanize popular support. For instance, TPLF has now become the new criminal group; it makes perfect sense, then, for the government and its supporters to withdraw protection from civilians in Tigray and elsewhere who have been victimized in the name of restoring law and order. Collateral damage is the language used to explain atrocities on civilians. Conducting performative politics such as elections elsewhere in the country while framing the conflict in Tigray as a “law and order” issue will not address the deep seated problems Ethiopia is confronted with. 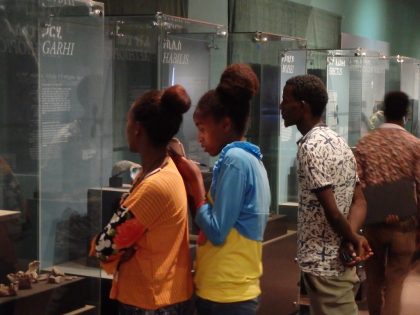 The current political conflict, now a civil war, in Ethiopia partly has its roots in disagreement among elites on how to narrativize Ethiopian history.