A few weeks ago, a South African ad campaign for Adidas and Beyonce’s Ivy Park spotlighted a black drag queen. Adidas presumably expected to be lauded for this step by the queer community and to face a fair amount of backlash from homophobes around the country. There was only one problem: the drag queen in question was Siv Ngesi, a prominent local comedian and cishet man who was, so far as we could see, in drag for only the second time in his life. The internet exploded and, perhaps unexpectedly, the backlash came from the queer community—enraged that drag queens who had invested years into the craft had been overlooked in favor of someone with no visible link to the queer community. The frustration was understandable. Here was an opportunity for South Africans from all walks of life to be exposed to drag and all of its gender-bending wonder. Surely the opportunity to represent the queer community on this platform should have gone to a member of the community, especially since these (paid) opportunities are so rare. And yet there was something about the outrage that made me deeply uncomfortable. Why did we expect queer liberation from a multinational corporation and why were we so disappointed that they had failed us?

Historically, queer activism has been intrinsically linked to anti-capitalist, anti-imperialist, and anti-racist work that challenges the state, elites, and other structures of power. Stonewall, the protest widely credited with giving rise to pride marches, was a riot against police violence and state interference in queer spaces led by trans women of color and drag queens. Closer to home, queer icons such as Simon Nkoli (who served as inspiration for the HIV/AIDS movement), Bev Ditsie (a filmmaker and the first gay person on a reality TV show) and hundreds of others fought not only for queer rights but were explicitly anti-apartheid and internationalist in their focus. They formed important connections with other activists in apartheid South Africa and contributed greatly to the struggle against an oppressive state. Now though, I struggle to think of a popular, queer, and leftist organization or mainstream queer activism that shares any of the radical features of our predecessors’ work.

This is not to say that queer organizations and NGOs do not do important work. It is also not to say that queer people do not contribute to leftist organizations and movements. In late 2020, for example, a black queer feminist collective called #WeSeeYou occupied a luxury Airbnb in Camps Bay to make an important point about land, housing, and the socio-economic inequalities that make queer people especially vulnerable to violence and destitution. But such projects are in the minority. There has been a distinct shift in what we consider our goals and how we go about achieving them.

There are two factors worth exploring to trace the shift in queer activism in recent years. The first is specific to South Africa’s context. Under the new democratic dispensation, a broad coalition of queer organizations came together to form the National Coalition for Gay and Lesbian Equality and agreed to adopt a targeted legal and political strategy in terms of which the politics of mass struggle, so effective during apartheid, were abandoned. The decision was made because there was real fear that taking to the streets would incite a response from the religious right and that the queer community simply did not have the mass support necessary to counter this force. Instead, as the interim constitution was drafted and the country prepared for its first democratic elections, teams of lawyers and lobbyists worked to incrementally secure legal and political protection for the queer community under the direction of a small group of leaders who tightly controlled the movement’s trajectory.

It worked. South Africa was the first country in the world to prohibit discrimination on the grounds of sexual orientation and gender, and a series of progressive court cases extended a range of other rights to same-sex couples, including the right to adopt, to inherit from one another and eventually, to marry. Trans people can receive healthcare in state hospitals, and processes exist to change one’s legal gender markers. These services are often flawed, weighed down by the same bureaucratic troubles that plague South Africa in general and the added burden of homophobia and transphobia from state officials. But we cannot deny that queer people in South Africa enjoy a greater standard of living than many of our peers on the continent and indeed the world.

Unfortunately, the tightly controlled, heavily centralized strategy that brought us these victories also significantly weakened grassroots queer organizations and activism. Queer organizations doing important work exist but are generally small and professionalized and we are still more likely to achieve change in front of a court than on the streets. In the country that pioneered the term corrective rape—to describe the rape of queer people in an attempt to convert them to heterosexuality—and in which queer people still face significant violence and prejudice, the absence of a grassroots mass queer movement is glaring.

The second factor contributing to the transformation of queer activism is global. Pinkwashing is a term most famously used to describe Israel’s strategy of trotting out its LGBTQ+ friendliness to portray itself as progressive and distract from its apartheid policies. The term describes the way brands and various political actors use support for the queer  community as a marketing tactic or to distract from their harmful policies and actions. Despite criticism, pinkwashing has become increasingly popular and, in a neoliberal world, a global trend has arisen with queer activism becoming contingent on market solutions, politics of “inclusion” and calls for representation. The political economist Ellie Gore writes that:

The struggle for queer liberation is being co-opted by corporate pinkwashing and the commodification of LGBT+ Pride, which shapes and reinforces a dominant queer liberal politics. This politics prioritises representation over more structural, redistributive demands… Together, these dynamics work to obscure the connections between LGBT+ rights and other key social justice issues, specifically anti-racist, anti-capitalist, and pro-worker politics.

Instead of demanding from the state housing for homeless queer people, healthcare for trans and intersex people or those most at risk of AIDS, safety for queer people, and an end to imprisoning trans people, we demand representation from Disney and Netflix, rainbow merch from corporations that make use of slave labor in Africa and Asia, and that Twitter censor homophobic rhetoric. When someone expresses homophobic or transphobic opinions, we alert their employer or their school and weaponize our buying power to hit them where it hurts—their career, their livelihood, their ability to sell their labor to sustain themselves. The same is true of corporations like Chick-fil-A or Afropunk, who donate to homophobic causes or platform homophobic artists. Instead of throwing bricks through their windows, our great revolutionary act is to buy a chicken sandwich from the other million-dollar corporation that treats its minimum wage workers like trash.

We have tailored our activism to those meaningless reforms that the market can offer, rather than demanding and creating true liberation as the people. Our demands, even when directed at the state, are devoid of any kind of class-consciousness or anti-imperialist sensibility. The queer community in the USA celebrates the fact that trans people can now serve in the same military that ravages the global South. Around the world there is a push for queer people to be protected by hate crimes legislation, a move that seems commendable but that trans-activist Dean Spade points out only lends legitimacy and puts more tools in the toolbox of the very same police forces who regularly mete out violence to queer people.

All this is apparently worthwhile because we are receiving representation and integration that will allow us to self-actualize and normalize queerness, eventually leading to our acceptance by broader society. Representation is important; it feels good. When I was seventeen, I exclusively read and watched queer media for almost a full year. It was exhilarating to see myself and my experiences reflected in a way that assured me that I was not alone. Art is undoubtedly important, but representation alone is not enough, and I worry that for the most part, we have made it the sum total of our popular activism. Looking back, I can’t help but wonder why I had to learn about Sapphic safe sex from a YouTube series or start questioning my gender by watching RuPaul’s Drag Race. Why was there no community to guide me through these realizations? Why were the only queer elders I knew on a screen?

Most worrying of all is that in the process, we have handed the reigns of queer liberation over to private, for-profit companies. It is far easier to rage against a corporation on Twitter until they relent, than it is to form our own community, protest against the state and pursue genuine political change. Corporations are in fact more likely to give in to our demands because we are not some aberration to them, we are simply the contents of our wallets. But corporations, when given the power to represent us, promote a very specific, defanged version of queerness, a version that is not a threat to them nor the system they rely on. The gay couples we see in adverts or on screen fit neatly into a cooker-cutter mold. They are generally white, cisgender, abled, conventionally attractive, monogamous and, most importantly, liberal and wealthy. They are an attempt to normalize queerness, which at its core is a celebration of difference and a rejection of normalization. This phenomenon has been described as homonormativity, which according to Lisa Duggan “does not contest dominant heteronormative assumptions and institutions, but upholds and sustains them, while promising the possibility of a demobilized gay constituency and a privatized, depoliticized gay culture anchored in domesticity and consumption.”

Drag, in particular, is about messing with the gender binary. It is about understanding gender—and for drag queens, femininity—as a performance rather than a fixed and restrictive category. In doing so, with wigs and lipstick, it threatens the very structures that keep us oppressed. It is about community and support, drag mothers teaching young queer people how to apply their makeup and also how to navigate the world and organize against injustice. It is loud and vulgar and sexy and joyous and liberating.

So, while people of all sexualities and genders should be free to explore drag and all that it represents, Adidas chose Siv precisely because he was none of those things. In their advert, drag was nothing more than a man in a dress. We should not have been surprised. Adidas and all the companies like them embracing corporate queerness are never going to offer us representation that liberates us. They are only ever going to offer us representation that sells us shoes. 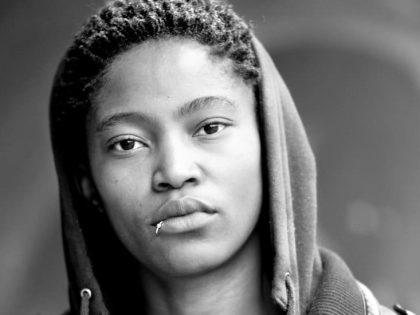 A visual history of African LGBTQ

A quick review of films showing at two festivals with a focus on gay people: The Out in Africa Festival and the London Lesbian and Gay Film Festival.