Every year many of the about 200,000 refugees from dozens of countries across the continent in Kakuma refugee camp in Kenya turn out to celebrate World Refugee Day on June 20. But when asked, few of them remember that this day marks June 20, 1974, the entering into force of an African answer to an international refugee convention. The Organization of African Unity (OAU), founded in 1963 as an aspirational pan-African project, started discussions about formulating an African refugee convention just one year after its inception. The OAU’s Convention Governing the Specific Aspects of Refugee Problems in Africa finally came into being in 1969 and was ratified in 1974. However, as Marina Sharpe and others have shown, the convention struggled to significantly ameliorate the situation of African refugees across the continent as implementation challenges amounted. To understand the coming into being of the 1969 convention, we need to examine the global historic context, and the regionally specific confluence of decolonization struggles and ideas about pan-African solidarity.

After World War II, refugees became codified in international law. As a response to large scale population movements, the world’s first legally binding refugee convention came into being, the 1951 Convention relating to the status of refugees (referred to as the Geneva Convention). African heads of state saw the Geneva Convention, with its emphasis on individual, political, and civil rights, as the product of a European tradition. They were motivated to draw up an agreement that would render international refugee legislation applicable to the African context and reflect African circumstances and values around refugee protection. Central to this were notions of African solidarity, pan-Africanist support for decolonization refugees and advances in responsibility sharing, temporary protection, and voluntary repatriation. This, however, proved to be more challenging than originally envisioned. The drafting process lasted from 1964 to 1969 and involved various working groups consisting of ambassadors and legal experts and resulted in presentations of five drafts at different conferences across Africa. After much discussion and false starts, one of the first and few legally binding documents the OAU ever produced emerged. The document is said to have paved the way for group-rights to claim refugee status, to have first codified the principle of voluntary repatriation, introduced the prohibition of refoulment (expulsion of refugees), and to have framed asylum as a peaceful, non-political act. At a Seminar for National Correspondents and Meeting of the Consultative Committee in 1970, the OAU’s own Bureau for the Placement and Education of African Refugees celebrated the convention as “a very progressive document, which can efficiently help towards a permanent solution to the Refugee problem in Africa” and further demanded that “all those dealing with the refugee problem in Africa … should make of it their bible.” This, however, was not to be as ratification and implementation were slow and enforcement inconsistent. The OAU lacked the political power and a body that effectively oversaw the broad adoption of the 1969 convention into national laws. This gap regarding the supervision of the 1969 convention remains to this day.

To understand the 1969 convention’s origin three things are important. First of all, before the 1967 protocol to the Geneva Convention was ratified, African refugees were excluded from international refugee law, which limited its application to European World War II refugees. After the 1967 protocol, one of the initial reasons for beginning the drafting process disappeared and it now became a question of how to supplement the Geneva convention rather than to draft the first convention applicable to African refugees. The UNHCR, protective of the Geneva convention, became involved in the later drafts, so the African convention did not emerge in isolation but close cooperation with an international organization that saw itself as the custodian of the Geneva Convention and its protocol.

Secondly, refugee numbers within Africa were not only on the rise, but because many displaced people hailed from decolonization struggles, supporting them was a crucial political project for the OAU. In 1964, there were about 400,000 refugees; by 1972 the number had risen to about 1 million. Anti-colonial solidarity emerged as an important organizing principle in both the creation of the OAU and the 1969 convention. Refugees-as-freedom-fighters were worthy of protection, but so was the territorial integrity and political sovereignty of the newly independent states. These negotiations revealed the tensions between securitization and sovereignty and pan-African solidarity.

And thirdly, pan-African ideology was central to the creation of the OAU and the treatment of refugees within the continent. Ethiopian Ato Kifle Wodajo, the first Secretary General of the OAU, in 1964 penned an article about Pan Africanism in the Ethiopian Observer, underscoring the destructive role of colonialism and the imperative that “the only way to salvation for the African people is self-government.” The simple but effective message was that Africa’s strength lay in its unity as decolonized continent. This thought also motivated the refugee convention. Young independent nations like Tanzania, for instance, followed an “open door policy” and saw refugees not as “problems” but as potential for national development. Referred to as “settlers,” refugees effectively functioned as what Joanna Tague calls “displaced agents of development,” building infrastructure like roads, clinics, and schools in remote areas of the country. The convention was intended to codify refugee protection across the continent, thereby providing a set of principles to be applied in refugee management.

Refugees have not become a global topic only in the 21st century. Part of a global conversation about refugee rights and protection, the OAU refugee convention served in part as an inspiration for the Latin American Cartagena declaration of 1984. The study of refugees from a historic perspective is pertinent as much of Europe, the United States, and other parts of the world, from Bangladesh to South Africa, have been preoccupied with what is often labelled a global “refugee crisis.” As of today, we know too little about seeking and providing refuge in the global South, where the majority of refugees have been and continue to be hosted. This blog series is a contribution towards illuminating the African context specifically, and refocusing our attention to stories that have been written out of national histories for too long. The global “refugee crisis” today is at its core a human crisis that generates hopes, fears, and expectations which ultimately influence political and legal agendas. Understanding what historical conditions once made possible a more generous and hospitable reception of refugees than we can imagine would be enshrined in law today and thinking through historical alternatives can inspire us to think anew about alternate possibilities for the future. 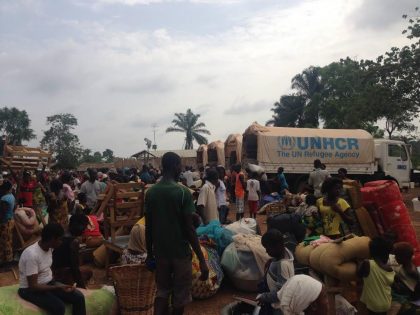