Malcolm X once said that “racism is like a Cadillac; they make a new model every year.” I think about these words every day. They give me the power to make sense of the reality of post-revolutionary Sudan, limitations and all.

The legacies of Sudan’s postcolonial traumas and the Presidency of Omar al-Bashir (1989-2019) have loomed heavily over the lives of Sudanese—to varying degrees, given the past and present regime’s reigns of racial terrorism in Darfur, the Nuba Mountains, and South Sudan—as well as in the Sudanese diaspora.

After nearly thirty years of this reality and its unfettered consequences, hopes for a Sudan borne out of a collective imagination, freed from the strangle of austerity measures, indiscriminate policing and murder, and the orchestrated oppression of those who did not fit into the mold of the regime’s “imagined community” began to manifest before my very eyes.

This “new” Sudan was emerging out of the December 2018 uprisings and the subsequent sit-in at the military headquarters (April 6—June 3, 2019). I personally saw it in the glimmers of faith I had finally seen in my parents and those of their generation. The fruits of their arrests, their activism, and their exile had graduated and been succeeded by the perseverance of those that came after them. Power had proven itself to resoundingly be in the people.

The revolution and I officially met on May 23, 2019. Newly graduated from a college on the American East Coast, I returned to Sudan after having left eight years prior. I was eager to take part in it and see for myself what this “new” Sudan was made of. The moment I stepped onto Qiyada street and into the many worlds of the sit-in, I was engulfed by a determined chant: “kol al-balad Darfur” (the whole country is Darfur).

I believed in the spirit of the chant because I wanted to. For so many years I had been weighed down by the fact that the place I called home, my safe haven from the US’s deep-seated hostility towards black lives and black bodies, was equally shaped by state-sanctioned anti-blackness. Here was the opportunity to rectify it. It started with a chant, but hopefully, it would be followed by critical conversations many of us would have to have with our families about the ways we’ve perpetuated Arab supremacy and violence against non-“Arab” communities in our shared complicity with so-called societal norms. I was so enamored by the zeal that I did not even register the fact that Qiyada street was surrounded by janjaweed-turned-Rapid Support Forces’ tanks and vehicles. I was so determined to hold on to the spirit of the revolution that I told myself that the janjaweed’s murder of a six-month pregnant tea lady, Mayada John, near Qiyada street on May 29, 2019 was an aberrant, horrific circumstance of this “new” Sudan that would be vindicated upon the inauguration of a civilian government. The lies I was telling myself to assuage my fears and avoid confronting reality as it truly was, were beginning to feel less and less believable.

My relationship to the revolution and to Qiyada street took a sharp turn on June 3, 2019. On the eve of the night before the massacre, I had been planning to go to the sit-in after breaking my fast. The day after next was Eid al-Fitr, and a mass prayer in front of the military headquarters had been organized by the Sudanese Professionals Association. The energy leading up to the day was bound to be bustling and energizing. At the conclusion of the night’s taraweeh prayers, it started pouring rain and the power went out at Qiyada street, so I did not go. I told myself I would just go tomorrow, and if not tomorrow, I would go the next day. The sit-in was immortal. There would always be an opportunity to go.

The following morning, I woke up to a de facto lockdown, the constant whizzing sound of gunshots, and an internet blackout. The revolution, as I had come to know it, was over.

A part of me felt naïve for thinking it could even exist. The courage and fearlessness I had seen in the revolutionaries on Qiyada street and beyond assured me that I had every reason to think that the goals of the revolution were achievable. Maybe they would be in a world where individual agency was not limited by the structures imposed around it. A world where neocolonialism by way of the US, China, and Qatar (among others); Saudi Arabia and the UAE’s imperial campaigns in Yemen, and their use of janjaweed mercenaries to sustain it; and the long-standing relationship between the Sudanese government and the state’s military infrastructure did not define Sudan’s past, present and future.

June 2020 marks the one-year anniversary of the “dispersal” of the sit-in. In the year since, a sovereignty council including one of the perpetrators of the Khartoum massacre was declared the head of state of Sudan; Rapid Support Forces have continued to kill non-“Arab” civilians in West Darfur, their attacks on the Kerending camps in El Geneina resulting in the death of 80 people and the displacement of 47,000; and at the same time, the transitional government has been lauded for banning female genital cutting and lifting some of the “former” regime’s restrictions on the press and freedom of speech. Sudan now has the highest number of coronavirus cases and deaths in East Africa, which led to a nationwide lockdown and the criminalization of travel between Sudanese states. Although these measures are necessary, I worry how the pandemic will be used to justify the thwarting of Sudan’s slated transition to a civilian government in October 2022.

Racism is at the very ethos and heart of the modern Sudanese state. As long as “former” structures continue to be relied upon and perpetuated, it will be a fundamental part of every iteration of it. This is the case with the current transitional government. The ghosts of our past mercilessly haunt our present. Racism, like the state’s other technologies of power, is mutating, although it has been muffled by the empty promises of a more politically correct and internationally “respectable” government. It is entrenching itself deeper and deeper into the fold of the Sudanese state.

Revolution, however, is a process, not an event. 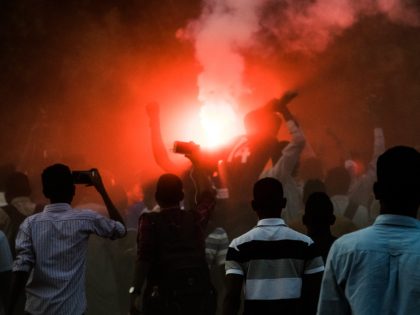 What role for the Black American Left on Sudan?

The American website Black Agenda Report commented on the protests in Sudan and got it completely wrong.