The uprising that toppled Sudan’s President Omar Al-Bashir on April 11 is unique in that it is both a national and transnational movement. In previous Sudanese revolutions, the capital Khartoum was the epicenter of protests. This time, however, the protests emerged from all cities, towns, and rural areas in the Sudan. Moreover, many Sudanese living abroad are playing important roles in supporting this revolution and making the voices of protesters heard globally. No longer only an economic force sending remittances back home, the diaspora community is a powerful social and political asset with which Sudan’s rulers have to reckon.

As an immigrant myself and a professor of anthropology, I have studied the connections that immigrants in general make between their new home countries and their former ones. The notions that immigrants constitute a brain drain from their countries of origin, and burden their new host countries can easily be debunked. With vast increases in global connections and fast routes that enable easy monetary and ideological transfers, immigrants have been playing important roles in their home countries from afar. The World Bank consider the remittances immigrants send to their countries of origin an important contribution to development efforts. But the various political, moral and social contributions made by diaspora Sudanese are priceless.

Rising anti-immigration sentiments in the United States and elsewhere are built on nativist conceptions entirely innocent of any knowledge of why immigrants are here in the first place. Nativists fail to recognize how immigrants struggle to make both host and original countries better places. If we take the case of the Sudan as an example, we first need to understand that most immigrants’ choices to leave their home countries were not at all easy. Many Sudanese were forced to leave because of the political instability in the country. Disagreements among different political elites led to situations of wars and conflicts, as we have seen in the case of South Sudan and Darfur. This political instability created new waves of Sudanese immigration to many parts of the world, including to the US.

In myriad host countries, Sudanese have created unique communities called jalias. Immigrants in general often find solace in these small communities, especially during times of rising xenophobia and islamophobia. In most cases, these diaspora communities also play important roles in the economic and political transformations in their countries of origin.

Sudanese diaspora activism is not new. Such communities mobilized around the civil war in South Sudan before it became an independent nation-state in 2011. They also raised awareness about the Darfur conflict in 2005 on university campuses and among the public in the US and elsewhere. They mobilized many human rights and civil society organizations and engaged various celebrities, politicians, and other political representatives to pressure the al-Bashir government to halt its military offensive and reach a series of peace agreements.

While previous activism was framed around divisive identity politics, ethnic and religious belonging, the current revolution confirms that dealing with questions of equal citizenship rights in the Sudan need not split the nation further along gender, ethnic, and racial lines. These important questions of equal citizenship rights can only be achieved through a peaceful democratic transformation and power-sharing. Such a transformation must also engage armed movements still fighting in Darfur, Blue Nile, and the Nuba mountains to form a new vision of diversity and inclusion in a united Sudan.

Since the beginning of the current revolution in December 2018, protesters in the Sudan and their allies in the diaspora have consistently expressed this vision of national unity. Diaspora Sudanese have been at the forefront of raising awareness about protesters’ demands in the US and elsewhere. In February this year, for example, Washington, DC witnessed unprecedented demonstrations by Sudanese-Americans, who came in large numbers from different states to make their voices heard and to support their counterparts in the Sudan. After the violent crackdown on protesters’ sit-in in front of the military headquarters in Khartoum in early June, diaspora Sudanese again organized protests in many cities in solidarity with activists protesting at home.

Solidarity cuts across the diaspora and draws people from all sectors and professions to the work of global citizenship. Physicians, in particular, have played important roles—both in and outside the Sudan. Dr. Seif Saeed-Elasad, a dual citizen of Sudan and the US, is a long-time diaspora activist and one of the leaders of the Sudanese American Medical Association (SAMA) established by diaspora physicians in 2008. SAMA is a humanitarian NGO, whose goal is to share medical knowledge with Sudanese doctors. In an interview in late June 2019, Dr. Saeed-Elasad told me:

We donate money to help medical efforts in the Sudan… Our meetings bring doctors from different states within the USA and sometimes from Europe. We give medical advice about cases in Sudan where specialists may not be available… We are also involved in treating victims of rape in Sudan and dealing with the psychological trauma.

Diaspora activism has transformed the burden of being away from home into a gift of giving, alliance, and moral support from afar. The experiences of Sudanese in the United States, similar to the experience of many refugees and immigrants, help us to understand that giving back to both countries is a priority for many. 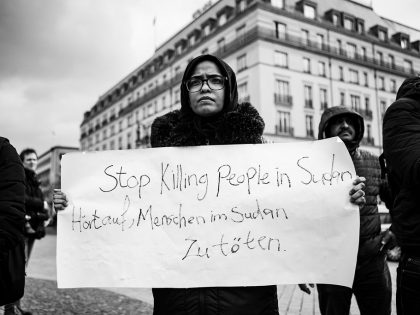 Solidarity with Sudan begins at home

A guide on how to support the uprising in Sudan.