The year 2020 marks the 60th anniversary of the “Year of Africa,” a phrase coined to mark the year in which seventeen African countries declared their independence from European colonial states. One of the first recorded utterances of the phrase was made in the context of a symposium on anticolonialism in Africa convened by the History Department at Wellesley College on February 16-17, 1960. Responding to a New York Times reporter, the African-American diplomat, Dr. Ralph Bunche, then-UN Undersecretary for Special Political Affairs, anticipated that the rapid pace of decolonization on the continent would make 1960 the “year of Africa” at the United Nations, with at least four and as many as eight new member states from the continent being admitted into that body. Beside Bunche, attendees at the conference included, Melville Herskovits, the anthropologist and founder of the first African Studies program at a US academic institution, Julius Nyerere, the future prime minister of Tanzania, the Moroccan and Tunisian ambassadors to the United States, as well as British, French, and US representatives.

At the same time that this symposium was taking place, on the other side of the Atlantic in Brussels, Belgium, the future of the Congo, the geographical and symbolic heart of Africa, was being decided at the Belgo-Congolese Round Table Conference. In these tense negotiations, rival Congolese parties came together to settle on the terms of the Congo’s independence from Belgium, itself represented by a divided political establishment. At the conclusion of the Round Table Conference and to the surprise of most observers, Belgium agreed to a six-month timetable with formal independence being granted in a ceremony scheduled for the end of June. This decision would put Ralph Bunche and the Congo’s charismatic future prime minster, Patrice Lumumba on a collision course.

Bunche would travel to the Congo independence ceremonies as the UN’s special representative. He would be there to witness Patrice Lumumba, who had been excluded from the program, interrupt the ceremony with a fiery speech denouncing the Belgium’s brutal colonial rule over the Congo. Lumumba’s performance would raise Bunche’s concern about the Congo’s future with Lumumba at the helm, and would begin a difficult relationship between the two men characterized by mutual distrust and suspicion. As the head of the UN’s mission in the Congo, Bunche was on the ground as the political situation in the Congo quickly spiraled out of control. The fragile relationship would break irreparably when Lumumba would interpret the UN’s failure to intervene in putting down the secessionist rebellion in the mineral-rich Katanga province as evidence of Bunche and the UN’s support of US and Western interests in the Congo. Faced with the UN’s inaction, Lumumba sought the Soviet Union’s aid, a move that would bring to the surface the Cold War tensions already at play in the era of independence on the continent and elsewhere.

Eventually the situation deteriorated into a full-blown crisis and Bunche was recalled to the UN’s New York headquarters. Bunche would therefore be in New York when word of Lumumba’s assassination in January 1961 filtered out of the Congo. Around the globe, angry demonstrations greeted the news, including one at the UN’s doorstep, organized by a loose coalition of African-American activists and artists in New York. On February 15, 1961, these demonstrators interrupted the proceedings of the UN Security Council, denouncing US complicity in Lumumba’s assassination. The demonstration caused Bunche to issue a formal apology to the UN’s leadership and to disparage the demonstrators for their “scandalous conduct,” which did not represent African-American sentiment on Africa. Lumumba’s assassination signaled the end of the euphoria that had greeted the “Year of Africa” and the beginning of decades of neocolonial rule on the continent. The demonstration itself, however, represented the eruption of a black radical tradition that continues to nourish the imagination, even in these darkest of times of travel bans and the deriding of African nations as “shit-hole” countries by the leader of the so-called free world.

The mysterious death of a UN Secretary-General

Revisiting the events that led to the tragic death of Dag Hammarskjöld, a key UN official in the decolonization of Africa during the Cold War. 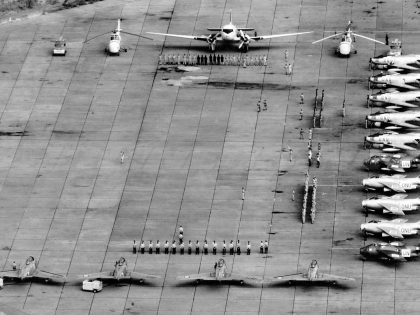