In July 2018, the Mineworkers Union of Zambia (MUZ), the largest and oldest of Zambia’s mining unions, held its 14th quadrennial conference and elections. Union elections in Zambia are typified by allegations of corruption, but not these. After serving two terms as the union’s General Secretary, Joseph Chewe, was elected unopposed as union President. His long-term Deputy, George Mumba, became General Secretary and Chishimba Nkole, former MUZ president remained as Zambia Congress of Trade Unions (ZCTU) president. The other two mineworker unions, the National Union of Mine and Allied Workers (NUMAW) and the United Mineworkers Union of Zambia (UMUZ) also held national elections in 2016 and 2017, and re-elected their respective leaderships.

After almost a generation of instability, the last five years have arguably been a period of success for these mineworker unions. Stable leadership has coincided with a reduction in the substantial debts of each union, with MUZ going from near receivership to annual profitability in ten years. More importantly, after the number of unionized miners fell to below 20,000 in the early and mid-2000s (from a peak of 65,000 before privatization), it has reached about 30,000 across the mining unions. Much of this growth in membership has come from unionizing sub-contracted miners, whose contract precariousness had previously been seen as a potential deathblow to a union movement structured around well-paid permanent workers.

However, the stabilization of Zambia’s mining unions has been intimately tied to an increasing focus on profit-generating businesses, at the expense of collective action. Union businesses are located on company property and require licensing from the government. Each union operates stores at the worksite and in town, selling essential commodities on credit to their members at a high mark-up. As payments are deducted from payroll (to reduce defaults) the unions need their employers’ cooperation for this system to continue. MUZ also owns a busing company that is contracted by the mines to transport workers (MUZ members) to the worksite and a mealie mill plant that has been made viable through subsidized maize and soft loans from Zambia’s government. Across each of the unions, these businesses are providing funds that compensate for the decreased dues that lower salaried workers are contributing, and the increased administrative costs of unionizing small groups of subcontractors. Dependence on these new sources of income has reduced militancy and is a liability during daily interactions with the companies.

Many underground miners who are members of the union are beginning to question the relevance of the union to workers’ rights. As one machine operator asked “what interests do the unions in the mining sector serve? It appears to me that they are more interested in business ventures than workers’ concerns.” Thus, members move from one union to the next hoping that the other union might serve them better only to discover that all unions offer the same kinds of services. Other members were concerned about the close business relations that unions have with banks and the mining companies. For every loan that is given to a mine worker by the bank, the union is given a commission. Yet this cost is passed on to the worker/member who suffers high interest charges and long repayment periods. At one of the mining companies, about 78 percent of general payroll employees had loans with commercial banks. In a context where retrenchments are frequent, and banks recover their loans from retrenchment packages, many retrenched miners have lost their entire packages. According to the Ex-Miners Association of Zambia EMAZ), an association that provides financial support for and lobbies government on behalf of retrenched miners, in 2015 alone, over 85 percent of the retrenched workers lost their packages through loan recovery from banks.

The unions’ changing emphasis and structure has been a relatively deliberate response to Zambian neoliberalism, aimed at mitigating, rather than challenging structural change. The presidents of the three mineworker unions mentioned earlier see their increased reliance on business as necessitated by mechanization, casualization, and feckless international investors. Mechanization is particularly troubling. Senior unionists see a time when there are a few thousand long-term jobs in the mining sector and are attempting to prepare the union for that. This creates many questions about what the mining unions’ purpose will be if there is no mining workforce.

Recent debates on trade union militancy advocate for social movement unionism—the idea that trade unions need to work closely with other like-minded civil society organizations, combining workplace issues with broader political issues in order to be relevant. The major problem, however, has been that unions in the mining sector find it appropriate to align with the ruling political party than with other civil society organizations. Each of the three unions holds an official policy of “working with the government of the day.” At both MUZ and NUMAWU’s quadrennial elections, members of government were invited, who warned miners against militancy that targeted either the companies or government. When civil society organizations are protesting against issues such as abuse of government funds or corruption, the union encourages its members not to be involved in politics. In an interview with some union leaders, most argued that “it is impossible to work with civil society organizations because they are very political.” This view clearly demonstrated that the unions in Zambia still see engaging in political and governance issues to be beyond the scope of the unions.

The combination of a mechanizing workforce and wealthier apolitical unions creates new questions for those who hope social alliances with social movements will re-empower unions in southern Africa. It represents a near direct contrast to Pnina Werbner’s description of Botswanan unions engaging in widespread mobilization of civil society associations that supersedes the notion of class identity. There are valid questions as to how Zambia unions can be involved in such civil action, not only due to their current entanglements with the government and companies, but also because class identity is so key to Zambian miners’ lived experiences. Alternatively, the unions’ growing financial clout has the potential to enable greater independence. Many more militant MUZ branch executives see MUZ’s mealie mill sales as potentially supporting a strike fund, subsidizing the costs of unionizing sub-contracted workers or even offering retirement packages (which they increasingly believe neither the government nor companies can be trusted to provide). It remains to be seen whether these (highly leveraged) companies will be a success and whether this success will enhance or damage Zambia’s mining unions’ potential to combat injustices in their sector or society. 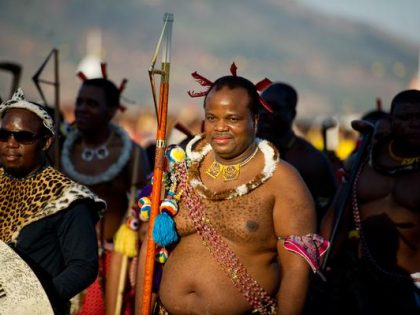 Labor protests in Swaziland: when no news is not good news

To quote an old adage by the late Steve Biko: the Swazi workers are on their own.