Robert Mugabe has conservative music tastes. He preferred—according to his old comrade Edgar Tekere—Cliff Richard over Bob Marley (Mugabe later referred to Rastafari as “… drunkards who are perennially high on marijuana”). Mugabe also bonded over Jim Reeves (listen to his former friend Wilf Mbanga tell a story about how they sang along to Reeves). First lady, Grace Mugabe, likes gospel music. She was particularly fond of the more sober tones of local singers Fungisai Zvakavapano Mashavave and Mercy Mutsvene. (One aspect of Zimbabwe’s ruling ideology that still needs to be explored, is how spectacularly it combines Mao and Jesus.)

If you watched the inauguration of Mugabe’s successor, Emmerson Mnangagwa, he favors the Zimbabwean megastar, Jah Prayzah. Mnangagwa danced (well, briefly clapped) along to a performance of Jah Prayzah hit “Kutonga Kwaro” earlier today. (Mary, wife of coup organizer General Chiwenga, also danced along). Jah Prayzah likes to perform in military fatigues. The song is associated with the “Lacoste” faction associated with Mnangagwa (actually the name of the clothing label connects to Mnangagwa’s struggle name, “Crocodile”). The song talks about the arrival of a new hero. We suppose he meant Mnangagwa. (ZANU-PF factions come with names: Grace Mugabe’s faction is known as “G40”)

Here’s ten post-independence, pre-coup struggle songs that made first attempts at leadership change. And no, we’re not including Bob Marley’s “Zimbabwe.” Thanks to everyone who pitched in with suggestions or whose timelines on Twitter and Facebook we spied for inspiration. You’re thanked at the end.

1) A former liberation fighter, Solomon Skhuza, was popular in the late 1980s and early 1990s. He is remembered for “Love and Scandals,” a reggae-inflected song about the late 1980s Willowgate which implicated government ministers in a scandal buying imported cars at knockdown prizes and reselling them on the open market.

2) One of Zimbabwe’s superstars, Thomas Mapfumo, imprisoned by the Rhodesian regime and (self)-exiled into the United States in 2001, produced many songs critical of government. We have chosen “Corruption” from 1989.

5) From the late 1990s, Mugabe and ZANU-PF’s dominance faced a serious challenge from the Movement for Democratic Change. The MDC grew out of the trade unions and civil society, responding to Mugabe’s attempt to change the constitution and prolong his rule. Though the MDC beat Mugabe and ZANU-PF in subsequent elections, the combined might of the military, police, ZANU and state media led to its decline by the end of the 2000s. “Bhora Rembabvu” by Leonard Zhakata recalls the stiff competition (that’s what the title means) between the two parties.

6) In “Bvuma Wasakara”, Zimbabwe’s other superstar, Oliver Mtukudzi, sings “Admit, You Are Now Old.” Widely interpreted as a call to Mugabe to step down, it became MDC’s unofficial anthem in the early 2000s (we both happened to be in Zimbabwe when that song came out).

10) In the first half of 2016, with the MDC decimated, protest mostly came from “civil society” groups. Chief amongst them was #ThisFlag, led by Pastor Evan Mawarire. A number of songs celebrated it. ”Simuka Zimbabwe,” by Privilege Gonah, implored Zimbabweans to wake up.

Evan Mawarire became a leader against Mugabe and ZANU-PF’s oppression in Zimbabwe, but at what personal cost? 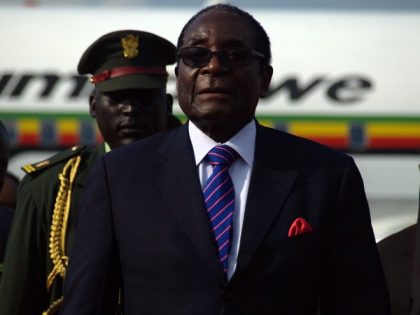 Mugabe and the tradition to not speak ill of the dead

What is the proper way for young Zimbabweans to remember Robert Mugabe’s legacy?