Mikhael Subotzky and Patrick Waterhouse’s ‘Ponte City’ will be familiar to many. The photographic project began in 2008 and won the Discovery Award at the Rencontres d’Arles festival in 2011. This month, Steidl published the project as a book, and an accompanying exhibition runs at Le BAL in Paris until April 20th, 2014. The work takes its name from the 54-storey apartment building in Hillbrow, Johannesburg, built in the 1970s, the tallest residential building on the African continent. Post-apartheid, the block became a home for those who moved from townships, and later for migrants from other African countries. In 2007 developers evicted half of the tenants from the now decrepit Ponte City but the ambitious planned refurbishment never took place. Since then, Subotzky and Waterhouse have been documenting and collecting at Ponte, “photographing the life of the half occupied block” – the inhabitants, objects and the building itself. Subotzky’s photographs include tableaux of all the internal doors, windows and television screens of the skyscraper. In addition the two have gathered material abandoned by inhabitants and from archives, including letters, postcards, architectural plans, newspapers clippings and promotional leaflets.

This is a body of work which seems suited to large-scale reproduction and showcase in a gallery. The windows, doors and television series have been displayed previously as a triptych of tall lightboxes.  For the show at Le BAL, the accompanying texts are piled into waist-high towers spaced throughout the room. Ponte City proves to be equally well suited to its new photobook form, however. The hardback rectangular book is the shape of the tower. In a ‘User’s Guide’ on the first page we are told that it is accompanied by 17 pamphlets of “written and visual essays”. Each of these pamphlets fit inside the main book, with the image on the cover matching an image from the book’s inside pages. Thus the reader becomes a participant in the acts of matching, collaging, and layering which are at the essence of the project.

The photographs are powerful enough to stand alone, in particular the portraits – of a woman dressed in pink in the elevator, a boy squinting through falling white debris, or a girl on tiptoes in her kitchen. They work even better as part of this unfolding collage. Shapes reappear on successive pages; circles and grids constantly refer to the shape of the building. A view from the ground floor looking up at the expansive circular core of the building is followed on the next page by an architectural plan of the snail-shell layout of the apartments, and on the next by a grey aerial view. Turning the pages we zoom out from a shot of one window, then six, then sixteen, then a double page filled with thumbnails. The grids of windows and doors are also subtly echoed in a poster of African flags, among Subotkzy and Waterhouse’s found material, and a table of numbers pencilled onto squared paper, corresponding to we know not what.

The book’s success comes from the complementarities of the photography and the found material, as on one double page where the back of a postcard, with tack marks still visible, is overlaid on a view down into the building’s empty centre. In one of the accompanying essays, novelist Denis Hirson writes that the Ponte city project is “a conversation between composition and chaos”. It is, moreover, a book that shows the detail and texture of both life and decay at the same time.

The book opens and closes with portraits of the building’s residents taken in its elevator, as though we are accompanying them up the 54 storeys and then back down again. In between we are shown what Ponte City looks like and perhaps some of what it means. Ivan Vladislavić writes in his introduction that the building “remains a focal point of the city’s dreams and nightmares, seen as a refuge or monstrosity, dreamland or dystopia, a lightning rod for society’s hopes and fears.” Fortunately though, this heavy symbolism does not extend into a reductive portrayal of the people of Ponte City. The building and the view are grey or brown; the colour in the book comes from the inhabitants and their belongings. 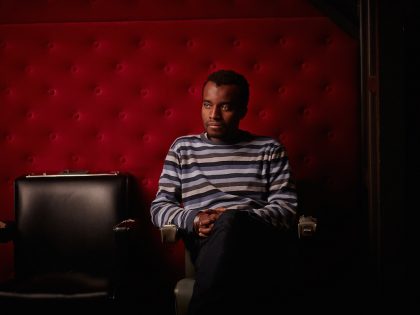 5 Questions for a Filmmaker: Kivu Ruhorahoza

Ruhorahoza wished he made “Sans Soleil” by Chris Marker: “The film is a good example of the work of a filmmaker who has reached maturity and an artist who is truly free.”