When the great Nigerian writer Chinua Achebe died in April 2013, one of the photographs used repeatedly to illustrate stories or obituaries was a portrait taken of him in 1959 by the American photographer Eliot Elisofon.

It is useful to unpack the image, a conventional portrait of Achebe leaning on a desk with two copies of Things Fall Apart in front of him. A photograph, a snapshot, the filtering of the lost moment, is always more than the visual graphics and the intended ‘message’ it proffers to mediate.

Elisofon’s photograph has come to be beloved among Achebe’s readers, perhaps because it provokes a certain nostalgia for the optimism of the 1950s and 1960s — the prodigiously talented young novelist appears glamorous, diligent, and ready to embrace the promise of the new Nigerian nation that was about to come into being. But the story of how the image came to be taken reveals a very much more complicated history.

In total Elisofon took a series of eight photographs of Achebe. The full series are held by the Eliot Elisofon Photographic Archives at the National Museum of African Art (NMAfA) and can be viewed online via the Smithsonian Institution Research Information System.

But how did Elisofon get to photograph Achebe?

By 1959 Elisofon was a famous photojournalist with a background as a war correspondent in Morocco and Tunisia as well as earlier in Scandinavia during the World War II, as a color expert for John Huston’s location shooting of the colonial film “The African Queen” starring Laureen Bacall, Humphrey Bogart, and Katherine Hepburn and for climbing the Rwenzori Mountains (on the Uganda-DRC border) to take the very first color pictures of the wet fauna in the heath region (published in LIFE magazine in 1953).

His commission for LIFE Magazine in 1959, which meant another opportunity to travel to Africa, had two purposes, each of which impinges on my reading of the Achebe photographs: The first concerns the project to produce a re-affirmation of mythological Africa through combining western literature of the continent with fresh photographs, as mesmerized by visual cliché-mongering and stereotyping as their literary counterparts. So Elisofon’s travel (August 18 to December 20) was a quest to, on one hand, identify “African” settings that would harmonize with extracts from writers such as Joyce Cary, Winston Churchill, Ernest Hemingway, Henry M. Stanley, and Joseph Conrad. 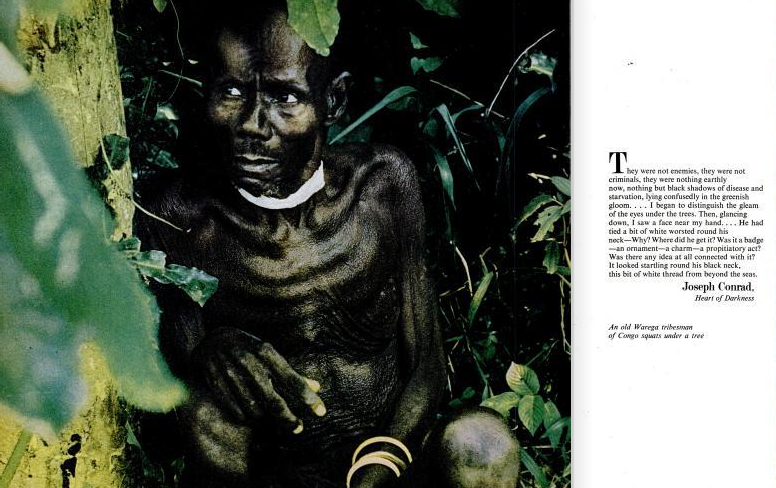 It is the Conrad photo that interests me (above; in LIFE 1961, page 72). The caption reads: “An old Warega tribesman of Congo [who] squats under a tree.” The description is only spatially true, as the photographer’s guidance was far more precise. Following the Conradian script (a collage of lines from Joseph Conrad’s Heart of Darkness that contains the well-known episode about the hungry slave carrying the mysterious sign, “from beyond the seas”) Elisofon had theatrically wrapped a strip of white cloth around the anonymous and miserably looking Lega man’s neck.

Only a few weeks later, he was to meet Achebe in his home in Enugu, about 2570 km from where Elisofon had portrayed the ‘Conradian’ man discussed above, but given Achebe’s well-known and aggressive rejection of Conrad and Elisofon’s veneration of the same (not to mention of Stanley) and his obvious disregarding of Things Fall Apart, the real distance between them can only be measured in murky, racial moon years.

Elisofon’s library of literature (fiction, travelogues) of about one hundred titles that were selected to represent ‘literary’ Africa, and from where the fourteen qualified writers were culled for the racist essay, did not accommodate Achebe’s novel. And we are thankful for that. It was no doubt too close for contact; ‘savages’ do not write novels! Yet, we have to ask, why did Elisofon bother to photograph him at all?

The reason is related to the second part of his LIFE commission, the documentation of an African country in transition or of Nigeria’s route from dependency to independence, the medial peak of which was Elisofon’s coverage of the electoral campaign (rigged, some think, by the British) for the December 1959 election, which would usher in independence the next year (October 1, 1960). He portrayed legendary political leaders such as Samuel L. Akintola of the Action Group and the nationalists Michael Ihemukara Okpara and Nnamdi Azikiwe. Azikiwe, “the Zik of Africa,” who would become the country’s first president. If we only look at his photos from southeastern Nigeria and the Enugu State region, apart from meeting Achebe, Elisofon photographed workers at Ekulu coal mine and steel workers at the Oji River Power Station (west of Enugu). But it was the masqueraders at the Onwa Asaa (yam) festival in Ugwuoba (between Awka and Enugu) that triggered his interest to a maximum; the Washington archive holds around one hundred photographs emanating from his frantic day-long work following the Igbo dancers. The LIFE photo-essay was called “The Hopeful Launching of a Proud and Free Nigeria” (LIFE 1960).

The photographs of Achebe were all in color. Four of them picture the writer in profile sitting at a table, writing; two introduce Achebe facing the camera; and the last show him exhibiting the British and the American editions of the novel. As if by accidence or conceit (Achebe’s choice), a third book (anonymous for the viewers) but still visible, occupies the back stage. It is the OED, Oxford English dictionary, another authority in pain. I hear Achebe pronouncing: “First you have to learn Queen’s English, then you can break all her rules.”

Elisofon’s ‘Achebe’ integrates both with the literary-photographic work on the myths of Africa and the documentation of the transition’s impact on Nigerian economy, education and culture. In this extended format I have used, the photograph reads as a cautionary tale. The myth mongering, the LIFE 1961 essay, was paradoxically more political and conclusive than its factual counterpart, the structured documentation of transitory Nigeria from within the traditional dichotomy of the ‘new,’ the ‘modern,’ the ‘international’ versus the risky sadness of the bygone. Young writer Achebe on the photo, with the pen in his hand, connotes energy and dauntlessness (as do the images of the miners and the steel workers). But these qualities are benumbed by the romance of the yam festival and the phantoms of colonialism. In 1960s’ American Cold War ideology and concurrent LIFE magazine rhetoric, the ‘white cloth’ around the neck of the African would not be unlaced.

The creator of Things Fall Apart has now returned to Enugu and Odigi for his last rest and this cautionary tale is mere history. Or is it?