Philippa Ndisi-Herrmann, a photographer and filmmaker working in Nairobi, Kenya, is our latest guest for our series where we ask photographers to pick their favorite shots from their own portfolio . She was born in Bonn, Germany, in 1985. In April 2011, the Sundance Institute exhibited a selection of her work at MoCADA (Museum of Contemporary African Diasporan Art) in New York City. Philippa has recently begun a new documentary project, “We Want Development,” and is working towards her first feature film, “Two Princes.” She was interviewed by Orlando Reade.

Perhaps, one personal reason why I photograph, is because I live with a constant feeling of loneliness. I do have the tendency to be quite introvert, but I am not the melancholic type, don’t get me wrong. I would like to consider myself as rather cheery, but still, the loneliness comes. Photography, I find, has a way of positively and proactively reveling in solitude. I love photographing – and I love the moments that surround it; the walking, the observing, the feeling, and the fulfillment that comes from the solitude of working with the image later. I love finding a subject and engaging in this meeting of two worlds; My world, and the person’s world. I shoot digitally, however for my personal work I prefer to shoot with film. I find that analogue has a way of truly honoring life. It respects the value of each second’s passing – there is no way to turn back. And so, the image captured on celluloid stands as a sole visceral relic of the past, the only one other than your own memory. The magic of film lives – and this is evident too, after processing the image – when I learn something more about that moment; a detail I may have not noticed: the expression of someone in the background, a shadow, suddenly life from the past reveals itself in our present. I am always in awe of this. Besides what I said about solitude, I will say in the same breath, that it is this loneliness that pushes me to reach out and meet the world. With street or documentary photography, you encounter incredible moments that you share with strangers. For seconds, or minutes, when I photograph a stranger, or a new friend, I am allowed a glimpse into their life, and they perhaps glimpse into mine; a trusting, fleeting friendship is forged. So in this way, photography for me, is a balanced marriage between solitude and companionship. This companionship may be with the subject, or with the viewer. Photography is a way of plugging into my humanity, and proving my own humane existence to the world. There is an island off the coast of Kenya called Lamu. There are many donkeys there, countless cats and there is only one car. It is at least a 24 hour journey by road from Nairobi, and a flight there is usually US$300. I am yet to pin-point why, but most of my personal projects revolve around this island: a long-term documentary I have begun working on, a fiction film I would like to make there next year, and of course, a body of photography work that I have been building on.

I will start with this image (above). This photograph on a personal level, reminds me of a great time of strength, a time when my personal and professional life converged. My heart was breaking, and as it is often with heart-break – you push yourself into making bigger strides. I gathered all the money I could find, bought all the film I could buy, and I left to Lamu to whimsically begin research on a documentary film idea I had. My budget was tight, but life has to happen, and so for days I would walk, photograph, and interview people. This photograph I took when I had stopped for a Fanta. The image reminds me of the feeling of being inside, and longing to be outside in the world. Photography for me sometimes is only about me longing to be somewhere else, or be someone else. And this image, yoh! I just wish I was that boy running and splashing my foot into those puddles! Aesthetically, I love this image because I see motion in the boy’s stride. And I love their sharp reflections in the puddles. Also to be frank, I love seeing school children, especially in Kenya, where education is sadly a privilege and not a given.

Well. I am not sure how to articulate why I like it. The only two words that come to mind are ‘forgotten’ and ‘overlooked.’

I met Ali as I circumambulated Lamu. We talked, and walked and he took me up to the sand dunes. There you can see the Channel below you, and the Island of Manda opposite. Lamu – specifically this area, Shela – has seen a surge of gentrification by wealthy foreigners. Once its surroundings were only mere sand dunes and mangroves. Now houses are cropping up and changing the social and environmental fabric of the Lamu Archipelago. I respect Ali and I appreciate the kindness that he showed me.

I took this image with a disposable underwater camera. It is of my lovely, dear cousin, Ayako.

I took this photograph a week ago in James’s small Kiosk in Lamu. My colleague and I trekked for ages to find James, though we had never met him. I do not have much to say about this photograph, except that I am struck by how the two males seem to be unaware of each other. Yet they have a very similar expression. It is almost like I merged the two images. 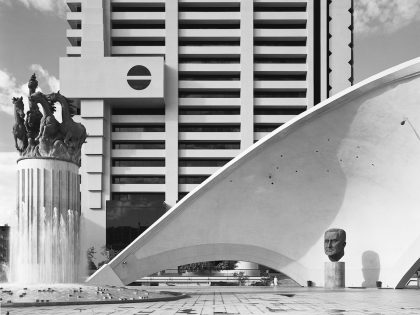 The South African photographer has a complicated place within his country’s photographic culture.