A lot of people confuse the Democratic Republic of Congo (the DRC) from its neighbor the Republic of Congo (ROC) on the regular. Sports commentators, statisticians and journalists who report on the National Basketball Association (NBA) can’t either. This happens every time they talk about NBA basketball player Serge Ibaka, who plays for the Oklahoma City Thunder.

Apart from sharing a border – the Congo River (yes, that river that Joseph Conrad made notorious in his fiction) – and their respective capitals facing each other an hour apart (you can travel by ferry across the Congo between the two), they have divergent colonial histories: DRC was colonized by Belgium, while the ROC was colonized by France.  The ROC used to be part of something called French Equatorial Africa, that included Chad, Central African Republic, Gabon and the ROC. Last distinction: The DRC is much larger and richer. The DRC is about a quarter of the size of the United States. The ROC is much smaller. Until Serge Ibaka, the most famous person from the ROC was the novelist Emmanuel Dongola. Patrice Lumumba is probably the most recognizable Congolese from the DRC. (The DRC has produced a lot more people that are globally recognized, especially musicians, but we’ll stop at Lumumba for now.)

One last thing, the DRC used to be known as Zaire. It was an invention of Mobuto Sese Seko when consolidated his power in 1964 and for the next three decades combined Africanism, corruption, dictatorship and pro-American rule.  In 1997, after a civil war, Laurent Kabila drove Mobuto out of power and renamed the country DRC.

This week, we like Deadspin, the American sports blog, were surprised to learn that ESPN’s website in the baseball card style profiles it made for NBA players, listed Ibaka’s birthplace as “Brazzaville, Zaire.” 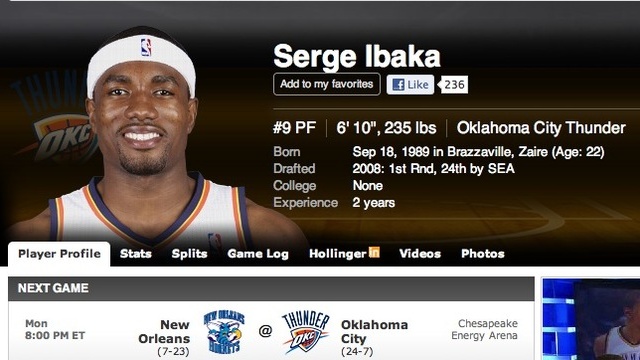 Today, I noticed they had deleted Ibaka’s country and his birthplace is now only listed as “Brazzaville.”

So now he has no country. (On the real, Ibaka as we know acquired a Spanish passport last year and now plays for Spain in international tournaments.)

But back to the confusion. We don’t blame people who can’t figure out their DRC from their ROC. In 1997, when the name change happened, the Washington Post reported a story about what locals thought of the confusion. They quoted a radio technician in Brazzaville, who probably made the most profound distinction between the two countries: “It is something we will have to get used to, and we will have to find ways to distinguish each other. They are Democratic Congolese over there, so perhaps that makes us undemocratic Congolese.” Basically, while both the DRC and ROC have been dictatorships for much of the time since independence, the DRC has been more slightly more democratic, while the ROC has been governed by the same man or the same clique.