Almost five years ago, the Marvel franchise film Black Panther,” directed by Ryan Coogler, was released. I was lucky enough to be in Ibadan, Nigeria, where I witnessed the enthusiastic reception of the film by the Nigerian public, just like the reception of the film elsewhere in the world and particularly in Africa. For the sequel, Black Panther: Wakanda Forever, I find myself, on a rainy Sunday afternoon, in the cinema of a rich suburb of Paris. The small theater dedicated to the film welcomes children accompanied by their parents, groups of teenagers, young couples, and a few adults like me, who come alone. The screening begins with a series of commercials for American fast food, video games, and sneakers, interspersed with French government campaigns aimed at “young people” to encourage teenagers to practice sports, against the evils of cannabis, and to urge French youth to join the national army. Finally, the lights go out and we hear Shuri, T’Challa’s little sister, black panther and ruler of Wakanda, invoking the help of the deity Bast to save her dying brother.

The interest of the first Black Panther rested mainly in the representation in majesty of an African nation that had never been colonized. For this reason in particular, this kingdom, Wakanda, is presented as proud of its identity, its socio-political organization or its unique architecture, and endowed with the most advanced technologies in terms of urbanism, health or weaponry, thanks to its important vibranium resources on which no foreign power has ever been able to get its hands.

In the sequel, Coogler has chosen to deepen this alternative geopolitical proposal by adding a reinforced charge against European (neo)colonial companies and the exploitation of the resources of the South by the North.

This seemingly original, even risky bet for a big American franchise such as Marvel, only reproduces a classic practice of authors of speculative fiction, aiming at criticizing the past and/or the present of their society by imagining alternative scenarios.

Fiction in this regard is used as a laboratory to test other possibilities, as underlined by authors such as Ursula K. Leguin or Nnedi Okorafor (see her TED talk), researchers Donna Haraway and Isabelle Stengers, or the French political scientist Yannick Rumpala.

As the historian Julian C. Chambliss notes, Coogler and his team are also following in the footsteps of artists claiming to be Afrofuturists, by bringing to light black knowledge and know-how that have contributed to the advancement of science and society, but which would have been annihilated by slavery and colonization: “This fascination with uncovering the ways in which Black contributions have been erased and suppressed means that Afrofuturist works often mine the past as a first step toward creating visions of the future.”

The originality of Black Panther: Wakanda Forever lies in the choice of basing its alternative geopolitical proposition (where the North is no longer the master of all resources and the greatest power on the globe) on the recourse not only to an African kingdom never colonized, but also to a secret and aquatic nation inspired by the myth of Atlantis and especially by Mesoamerican history and pre-Columbian mythologies. For five centuries, Talokan has been ruled by a winged demigod, Ku’ku’lkán, the feathered serpent god in the Mayan language, or Namor, or “niño sin amor”as a Catholic missionary “baptized” him. The latter came from the mind of the American comic book writer Bill Everett in 1939, making him one of the first Marvel superheroes.

Coogler and his collaborators, including Hannah Beachler and Ruth Carter, awarded respectively for the beauty and richness of the landscapes and architecture of Wakanda and for the costumes of the first Black Panther, have however preferred to work with Mayan historians in order to privilege the Mesoamerican references and to move away from the problematic reference to Atlantis. Drawing inspiration from existing pre-Columbian paintings and sculptures, as well as from Mayan and Aztec myths handed down to this day, they imagine a civilization that they themselves describe as “post-classic Yucatan.”

Some specialists of Mesoamerican civilizations have admittedly regretted the mixing of references associating, for example, the Aztec paradise Tlālōcān ruled by the rain goddess Tlāloc with the Mayan feathered serpent god Ku’ku’lkán.

We can also wonder about the proximity between the people of Talokan and the marine animals, reminiscent of other large film productions such as James Cameron’s Avatar(s) (2009 and 2022), which draw on a stereotypical Western imagination that considers the Amerindian populations as the “guardians of the forest” par excellence, in the mode of the “myth of the ecological Indian” studied by the anthropologist Shepard Krech or more recently by the historian Thomas Grillot.

Despite the shortcomings regarding representation and the tendency towards essentialism and folklorization, as archaeologist and ethnohistorian specialist of the Mesoamerican civilizations Kurly Tlapoyawa points out: “It’s not a documentary film. There’s only so much that can be grounded in reality.” What counts, for him as for the Mexican actor Tenoch Huerta who plays Namor on the screen, is that the pre-Columbian cultures are represented in all their splendor, as well as their languages (like the Yucatec Mayan spoken in Talokan), and their descendants, until now too often confined in the Hollywood cinema to the roles of illegal migrants or drug traffickers.

But beyond the on-screen representation of two powerful non-Western civilizations jealous of their independence, Coogler has also chosen to make his second Black Panther a fierce critique of the (neo)colonial undertakings conducted by the West against Africa and the Americas. The confrontation between Wakanda and Talokan should indeed deceive no one, in that it is in fact only one stage in the organization of the resistance of the South threatened by the greed of the North. As early as the first Black Panther, many people had already seen in vibranium a fictional variant of the many mineral riches held by certain African countries, such as the Democratic Republic of Congo, but coveted and violently exploited by foreign powers.

From there, the film forcefully evokes Frantz Fanon: “The last battle of the colonized against the colonist will often be that of the colonized among themselves.” In this respect, one cannot fail to be struck by the virulence of the film’s charge against France. It is particularly evident in the scene between a Wakanda advanced base in Mali, attacked by French mercenaries in search of vibranium, and the UN assembly in New York, where Queen Ramonda publicly exposes the hypocrisy of French diplomacy.

But it also transpires in several “winks” to the history of the struggles against slavery in the French colonies and for independence in Francophone Africa: the queen mother of Wakanda happens to be the daughter of Lumumba, the patronymic of the hero of the independence of the current Democratic Republic of Congo, assassinated with the complicity of the former Belgian colonial power; and the heir of King T’Challa and the spy Nakia, hidden since his birth in Haiti, is named Toussaint, in a tribute to Toussaint Louverture, liberator of the French colony of Santo Domingo in 1804, which would become Haiti, the first independent Black republic. In mirror, the broadcasting of a recruitment campaign spot of the French army aimed at the youth before the film seems quite inappropriate. One can also wonder about the reception of this aspect of the film depending on where it is viewed, at a time when anti-French sentiment is growing in many Francophone African countries, some of whose leaders still maintain ambiguous ties with the former colonial power, to the detriment of their citizens.

The fact remains that beyond these references to France’s relations with its former colonies, as well as to the violence of the Spanish conquest in South America and more recently to North American imperialism, decried in the film by the desperate attempts of the United States to find vibranium, there is finally very little mention of the West.

Indeed, one of the great strengths of this Hollywood blockbuster is to “provincialize” the North, leaving the stage to two great nations of the South who clash and then join forces to protect themselves and continue to prosper in peace. Black Panther: Wakanda Forever therefore appears to be a resolutely “Southern Turn” film, after the urban studies research movement that originated in South Africa and claims to reverse the point of view of researchers in order to produce urban theory from the cities of the South.

In the same vein, we can also consider the film as a translation for the general public of the proposals of Subaltern Studies, defined from the 1980s onwards from South Asia and notably India, calling for the inversion of hierarchies of power and knowledge between “center” and “peripheries” (the North and the South from a geopolitical point of view), but also between dominant classes and subalterns (which can be, depending on the context, the working classes, the peasantry, slaves, migrants, etc.) to adopt and make their points of view heard.

As such, it is a real tour de force for the film’s team, constrained by a cinematographic genre, the superhero film, always tending to value power, physical or technological, and to heroize the dominant ones.But this is also what limits the “subaltern” scope of this second Black Panther, featuring two civilizations that are certainly from the South, but that remain governed by hyper-centralized political systems—monarchy by divine right or sacred kingship—which is not without criticism from the literary scholar Ainehi Edoro and the author of several issues of the Black Panther comic Nnedi Okorafor. She also invokes an Igbo proverb from Nigeria: Igbo enwe eze (The Igbo have no king).

Black Panther: Wakanda Forever not only relegates the North to the background of its plot, but also does the same with the men (with the exception of Namor), usually the main actors of superhero films, to give the foreground to women, and to Black women in particular. Some hold positions of power, such as Ramonda, Queen of Wakanda, or CIA Director Valentina de Fontaine. Others hold strategic knowledge: this is the case of Princess Shuri, a young prodigy supervising the technological development of Wakanda, who ends up wearing the Black Panther costume she created for her brother.

By the place it gives to women, this second opus echoes another African-American blockbuster featuring powerful black women: G. Prince-Bythewood’s The Woman King, a fictionalized retelling of the story of the Agoodjié, the female royal guard of the kingdom of Dahomey, in what is now Benin (from which Coogler drew inspiration for the female guard of the King of Wakanda, the Dora Milaje).

Thus, the Black Panther saga continues its enterprise of reversing perspectives, by thinking of a world where power and innovation come from the South and where the North is relegated to the role of spectator, always a step behind. 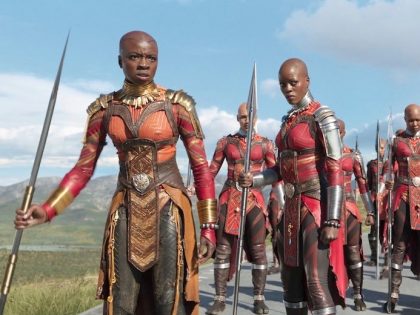