Elon Musk finally bought Twitter. Although everyone expected the move to quickly prove foolhardy, the speed of the implosion has been impressive. The latest gaffe is a failed attempt to monetize verification by requiring paid subscriptions for them, which has led to all manner of comical impersonations (one macabre highlight was a “verified” George W. Bush account tweeting “I miss killing Iraqis. “Tony Blair” responded with “Same tbh”). Some are watching with shock and horror and wondering if Twitter can be saved. But, when sulfur and fire rains, it is best not to look back.

Africa Is a Country managing editor, Boima Tucker, put it best some years ago: “Contrary to the utopian dreams of the early internet, the idea of a more democratic communications space has given way to a system of capitalist exploitation.” The thing to reckon with is the extent to which we have exaggerated the emancipatory potential of networked communication and social media, partly owing to our own psychic overinvestments in it. Which is not to deny that it has never shown democratic and egalitarian potential, but that’s never been what Twitter is for. There can be no right platform in the wrong world.

What was Twitter for then? In the New York Review of Books, Ben Tarnoff describes it as a “network of influence.” In a world characterized by the economization of everything, social media is the place to commodify the self, to transform one’s unique traits and personality into a product for public display. The main imperative online is to “stay on brand,” to cultivate an appealing enough persona in the endless “production of new genres of being human.”

The key contradiction of social media use, of course, is that even though these platforms appear to us as complete products that we participate in and consume, we are the ones responsible for ensuring their possibility in the first place. As the media scholar Christian Fuchs notes, “Digital work is the organization of human experiences with the help of the human brain, digital media and speech in such a way that new products are created. These products can be online information, meanings, social relations, artifacts or social systems.” Thus, it is us who create the value of these platforms.

In a better world, these digital communications platforms would be democratically owned and operated. But one also wonders if in a better world they would be as necessary. Perhaps, when we are less socially disaffected, living in societies with social provision, an abundance of recreational public goods and less exploitative, dignifying work, then we would all have less reason to be online. For now, the question is: in a time when this ideal is nowhere close to being within view, how best can we use platforms like Twitter as tools to get us to that world?

The possible answers here are murky. Twitter seems like a critical piece of infrastructure for modern political life. Musk is not alone in thinking of it as a marketplace of ideas, as something like a digital town square. Yet, and especially in Africa, Twitter is not as popular a platform, and even on it, a minority of Twiteratti exert an outsized influence in terms of setting the discursive agenda. But setting aside the question of who is excluded from the digitalized public sphere of which Twitter is a cornerstone, the important question is whether the quality of political debate that takes place is healthy or desirable at all. Granted, it can be fun and cathartic, but at the best of times, amounts to hyper-politics. In Anton Jager’s explanation, this:

can only occur at a discursive level or within the prism of mediatic politics: every major event is scrutinized for its ideological character, this produces controversies which play out among increasingly clearly delineated camps on social media platforms and are then rebounded through each side’s preferred media outlets. Through this process much is politicized, but little is achieved.

We would lack critical self-awareness if we did not admit that Africa Is A Country is a venue whose existence greatly benefits from an online presence—so it goes for every media outlet. Tarnoff points out that “… if Twitter is not all that populous in absolute terms, it does exert considerable power over popular and elite discourses.” To lack an online presence is to reconcile oneself to irrelevance. Although, the news cycle itself is a disorienting vortex of one topic du jour to the next. It makes difficult the kind of long, slow, and sustained discourse-over-time that is the lifeblood of politics, and instead reduces everything into fleeting soundbites.

Nowhere is the modern phenomenon of what Polish sociologist Zygmunt Bauman called “pointillist time” more apparent than on Twitter. For Bauman, pointillist time is the experience of temporality as a series of eternal instants, and the present moment’s connection to the past and future “turns into gaps—with no bridges, and hopefully unbridgeable.” The consequence of this, is that “there is no room for the idea of ‘progress.’” Living through a mode where everything seems to be happening all at once, is both to experience time as what Walter Benjamin called “a “time of possibilities, a random time, open at any moment to the unforeseeable irruption of the new,” but curiously, at the same time, for everything to feel inert, and for nothing to seem genuinely possible.

For a while, notions of historical progress have been passé on the left, associated with Eurocentric theories of modernity. Now, more than ever, the idea is worth reclaiming. The Right today is no longer straightforwardly conservative, but nihilistic and anti-social, thriving on sowing deeper communal mistrust and paranoia. These are pathologies that flourish on Twitter. The alternative to media-fuelled hyper-politics and anti-politics is not real politics per some ideal type. Politics, in the first instance, is not defined by content, but by form. The reason our politics are empty and shallow is not because today’s political subject lacks virtues possessed by the subjects of yore. It’s because today’s political subject is barely one in the first place, lacking rootedness in those institutions that would have ordinarily shaped an individual’s clear sense of values and commitments. The alternative to digitized human association, as noted by many, is mass politics: only when the majority of citizens are meaningfully mobilized through civic and political organizations can we create a vibrant and substantive public sphere.

AIAC editor Sean Jacobs observed in his book, Media In Post-apartheid South Africa: “the larger context for the growing role of media in political processes is the decline of mass political parties and social movements.” Whether Twitter dies or not, and if it does, whether we should mourn it or not, should be beside the point for those committed to building a world of three-dimensional solidarity and justice.

Royal succession in the age of social media

New Zulu king Misuzulu’s strategy for ensuring the relevance of his monarchy copies from the Windsors in Britain: use the media. 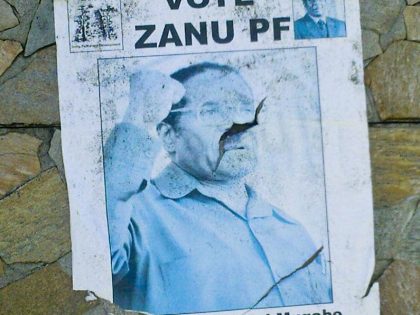