In 2008, anti-government riots sparked by anger over exorbitant fuel costs, President Paul Biya’s bid to extent his 25-year rule and a rise in food prices took hold of Cameroon. “The food riots,” as the protests later became known started in the port city of Douala, eventually spreading to the capital Yaoundé and several other cities across the country.

The government’s response to this week of unrest was violent. Reports reveal that police shut down the protests by making dozens of arrests, beating some participants with rifle butts and murdering scores of protestors. Government officials instructed state media and hospital staff not to publicize these deaths. However, the evidence that might prove the government’s heavy-handed response remains stifled to date.

Ten years later, there is another simmering crisis in the North West and South West regions of the country, sparked—again—by discontent and protests against Biya’s government. But now there is no hiding place for those who perpetrate atrocities. In the age of social media, ordinary Cameroonian civilians are able to take to Twitter and Facebook to voice their disquiet and demand that the world engage with their country’s plight.

Throughout 2018, a steady stream of shocking and distressing clips from Cameroon have appeared on social media, showing villages being burned to the ground, property destroyed, and civilians being tortured or killed. A simple Twitter search of the word “Cameroon” reveals multiple posts by numerous individuals, all claiming to show the results of indiscriminate government brutality in the country.

These graphic and sickening images are accompanied by comments from civilians, calling upon the regional and international community to take heed of the ongoing “genocide” in Anglophone Cameroon. Those posting videos and images are not afraid to share eye-witness testimonials with the world—even though this means speaking out against those in power.

While the Cameroonian government has refuted accusations made on social media, arguing for example that the army uniform worn by perpetrators could have been stolen by separatists in order to pose as troops, the BBC and other reporting bodies have used a variety of open source tools to debunk online speculation and verify facts. Combined with freely shared eye-witness accounts of brutality, Cameroon’s government is under increasing pressure as the inescapable evidence emerges to an international audience of billions.

Social media platforms are allowing the current crisis in Cameroon to be published in real time, by eyewitnesses, rather than being reported after the fact, by third parties. This use of the internet is beyond the government’s control and finally a voice has been given to the voiceless. The government can do little to silence them, and is finding it harder to manipulate the wider media landscape to shape narratives in its own interest. Today, the nature and volume of social media posts, the sharing of similar information and active citizen reporting is impossible to dismiss or ignore.

Several recent online campaigns have harnessed the power of social media in Cameroon, bringing civilians together as one voice, and mobilizing support from international communities to agitate for change:

It’s little surprise, then, that the Cameroonian government has made no secret of its distrust of, and distaste for social media. In   2016 an official statement was issued that labelled social media “a new form of terrorism,” also suggesting that sites like Twitter and Facebook had created “a social pandemic, perpetuated by amateurs, whose ranks continue to swell and who do not have a sense of etiquette and decorum.”

Social media does, of course, have some credibility issues and is notorious worldwide as a purveyor of fake news stories, hoaxes and misinformation. There are also those who take to online platforms to promote hate speech and propaganda, with sites having little control over provenance and authenticity of information.  Still, throughout Cameroon, increasingly, local groups, advocates and technology hubs have taken responsibility for addressing these issues—providing training, education and empowerment for social media users so that platforms are used more responsibly (and the government isn’t able to justify their campaign of antagonism.) Notable examples are Nina Forgwe’s work on hate speech with Peacetech Labs, Julie Owono’s contributions as Executive Director of Internet Sans Frontiers and CEO of AppsTech Rebecca Enonchong’s training and support.

The response of Biya’s government suggests that it is running scared from a rising tide of citizen criticism. This administration’s history of suppressing online access and to segregate and control its population is legendary. Blackouts and disruptions have occurred on several occasions, often for prolonged periods. For example, in the run-up to the 2018 presidential elections, multiple internet blackouts occurred in Anglophone Cameroon, placing severe restrictions on freedom of expression. Shutting down the internet has also had devastating and widespread economic and social effects on citizens in affected areas. In June 2018, the gendarmerie in Cameroon also banned officers from using mobile phones or social networks such as WhatsApp, Facebook and Twitter without permission.

However, access to the internet in Cameroon is growing and its 24 million inhabitants are among Africa’s most vocal when it comes to using online and mobile platforms to hold government accountable and call for reform. Young people in particular will, no doubt, be using it more, not less. 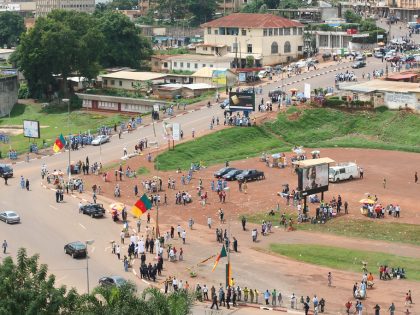 A mix of factors – language, regional, sexism, an opposition that has been co-opted by the ruling party and repression – prevents real, meaningful change in Cameroon.