The war in Ukraine, the first war in Europe since the conflagration in the former Yugoslavia, continues to dominate the world’s media. The massive Russian invasion rolls on, slowed by Ukrainian resistance. Popular anti-war sentiment has led to sanctions and the actions by the US and the EU as they quickly distance themselves from Russian oligarchs with whom they were so recently entangled. The surfaces of the dirty money of global capital have been suddenly illuminated.  At the same time, the war has highlighted the narrowness of the crude anti-imperialist positions that, while focusing on American brutality and warmongering, are silent about the actual invasion of an independent country and thereby avoid engaging the concrete contradictions that are emerging. (Within the ANC government in South Africa there is hedging by the current leadership, and wholehearted support of Putin and the Russian invasion by prominent supporters of the former leader, Jacob Zuma, who had close links with Putin during his time in office, while the SACP condemns Ukrainian racism making it clear that you simply can’t be an anti-racist and against Putin’s war.) “Ukraine is Russian.” Which is exactly what the French said of Algeria when after the FLN declared war in 1954. There was no war, just a “dispute.” This analogy to colonial wars is enlightening especially since Lenin’s last written statement on what he called the “National Question” concerned Ukraine and described basic principles for socialists and anti-imperialists:

A distinction must necessarily be made between the nationalism of an oppressor nation and that of an oppressed nation, the nationalism of a big nation and that of a small nation. In respect of the second kind of nationalism we, nationals of a big nation, have nearly always been guilty, in historic practice, of an infinite number of cases of violence; furthermore, we commit violence and insult an infinite number of times without noticing it … That is why internationalism on the part of oppressors or great’ nations, as they are called (though they are great only in their violence, only great as bullies), must consist not only in the observance of the formal equality of nations but even in an inequality of the oppressor nation, the great nation, that must make up for the inequality which obtains in actual practice. Anybody who does not understand this has not grasped the real proletarian attitude to the national question.

A “proletarian attitude” to the national question was the discussion in South Africa in the struggle years of the 1980s.

It is always remarkable how ideas that seemed to be buried in their context become newly alive as a new crisis reveals the fault lines on which the possibility of a new stage of revolutionary consciousness emerges. The war in Ukraine has suddenly made real a debate between the great revolutionaries Lenin and Luxemburg over 100 years ago. Both were revolutionary socialists and both were rigorously anti-war, but the fact that Lenin advocated for the defeat of his own country in the imperialist First World War set him apart from many others at the time. I was reminded of this in a recent post by “Militant Anarchist” about the invasion of Ukraine. “In Russia, a small victorious war (as well as external sanctions) will give the regime what it currently lacks,” they write, “It will give them carte blanche for any action, due to the patriotic upsurge that will take place among part of the population. And they will be able to blame any economic problems on sanctions and war.”

Resistance to the war in Russia is growing. They add, “The defeat of Russia, in the current situation, will increase the likelihood of people waking up, the same way that occurred in 1905, or in 1917—opening their eyes to what is happening in the country.” Of that 1917 revolution, Lenin reminded his comrades that the Russian workers had targeted the capitalists and the “Great Russian overlordship of many of the nationalities in Russia.” Lenin thus insisted from the beginning that different nationalities in “Great Russia” be given the right to freely determine themselves and warned against chauvinism in his own party. He was talking to many in the party leadership, including Stalin when he said: “Scratch a Communist and you’ll find a Great Russian chauvinist.” Stalin’s counter-revolution, forced collectivization, and starvation of Ukrainian peasants, was rooted in such chauvinism just like Putin’s war today.

When the Irish Easter Rebellion of 1916 rocked the powerful British empire, Lenin called it a “bacillus for revolution,” a revolutionary beginning that opened the eyes of the world to the possibility of a new society being built out of the human waste and destruction of the imperialist war. It made international solidarity concrete, demanding that British anti-war socialists support “revolutionary defeatism” by supporting the Irish rebellion. Luxemburg, the great anti-war internationalist, had undergone no such rethinking on what was then called the “national question” and continued to consider the idea of national self-determination “petit-bourgeois phrase-monger[ing].” She railed against “independent Ukraine” calling it “Lenin’s hobby,” and was dismissive of  Ukrainian self-determination considering it “a folly of a few dozen petty-bourgeois intellectuals” remarkably arguing that it didn’t have “any historical tradition since Ukraine never formed a nation or government, was without any national culture.” Lenin did not waver from the principle of national self-determination, even as the revolution was challenged by reactionary forces allied with the White army.

From a Marxist point of view, Russia’s invasion of Ukraine has economic as well as strategic consequences and ideological goals. As well as gas and oil, what is at stake is control of land—namely the rich soil of Ukraine with its highly productive “black soil” which makes it one of the world’s largest grain producers, especially wheat for the Black Sea and Middle East markets. It is the world’s largest producer (75%) of sunflower oil, grown in the Sunflower Belt, which stretches from Kharkiv to the Ternopil region in the west. Corn and soybeans are among the other main crops grown in what Putin considers Russia’s breadbasket.

Now indebted to the IMF, and consequently austerity programs and privatization, Ukrainian land and its rural people (about 30% of Ukraine’s population live in rural areas) are threatened by a pincer movement—IMF enclosures on the one hand, and a Russian take over on the other.

Caught between these powerful logics of capitalist accumulation, it is Ukrainian self-organization and mutual aid that can change the dynamic. As “Militant Anarchist” put it, “for Ukraine, its victory will also pave the way for the strengthening of grassroots democracy—after all, if it is achieved, it will be only through popular self-organization, mutual assistance, and collective resistance.” Along with revolutionary defeatism against the imperial power, Russia, these are arguments for self-determination through popular organization from below in Ukraine.

Such a stance is a welcome breath of fresh air given that the so-called anti-war and narrowly anti-imperialist and socialist groups have been silent about Russia’s military threat and silent on the war against Ukraine and on the shooting and bombing. They forget that Marxism is a philosophy of liberation or it is nothing.

Arming the people is changing the dynamic on the ground and while it is utterly understandable, as it was in Syria when Assad and Putin bombed the people, that Ukrainians call on NATO to save them, it is the people’s own self-activity and the building of grassroots solidarity that is their real hope. This is not to blame the Ukrainians who must do what they have to do, but it does make clear how “the West’s” lack of support for the Syrian revolution and lack of sanctions against Russian bombings emboldened Putin and the Russian military in Ukraine and highlighted the hypocrisy and chauvinism of Europe. An element of this contradiction can be seen in the solidarity expressed as Europeans welcome hundreds of thousands of Ukrainian refugees. This welcome is in sharp contrast to the attitude toward refugees from the mass murders in Syria who were turned back at Europe’s borders. And importantly this racism which is at the heart of European civilization is being called out.

At the same time, support for arming the people helps generate what Lenin called “democratic tendencies among the masses.” This is not meant to glorify these tendencies, which Lenin adds, exist alongside chauvinism and racism because “capitalism in general and imperialism, in particular, transform democracy into an illusion.” Lenin stressed the “co-existence of imperialism and the democratic tendencies among the masses.” He called the position of left opponents of national self-determination, including Luxemburg,  “imperialist economism.” The imperialist war and the betrayal of the second international socialists, who voted to support it, led Lenin to a study of Hegel’s dialectic as he sharpened the need to spell out exactly what he stood for as he looked for new revolutionary beginnings in the democratic tendencies among the masses in action as sources to change the world:

Whether there can be such a ferment remains to be seen. Resistance in Ukraine to the Russian invasion requires building popular organization from the ground up while keeping Western imperial interests at arm’s length. 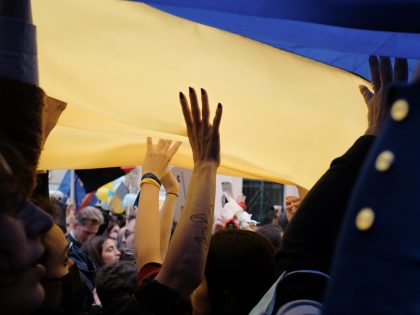 The Russians are here

Russia’s war with Ukraine has inaugurated the new Cold War most feared, and some wanted. Which side are you on? 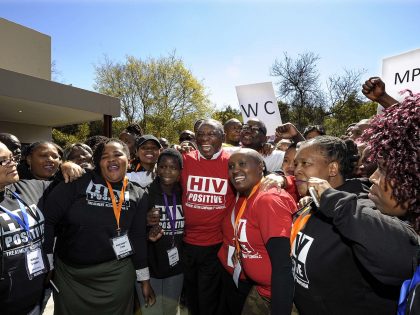 People are the state

What would happen if people could transform state policy based on the principle of social justice? The AIDS struggle in South Africa has some lessons.