There’s an oft-cited quote from African American abolitionist Frederick Douglass that comes to mind when I think about struggle: “Power concedes nothing without a demand. It never did and it never will.” Douglas continues, “Find out just what any people will quietly submit to and you have found out the exact measure of injustice and wrong which will be imposed upon them, and these will continue till they are resisted with either words or blows, or with both. The limits of tyrants are prescribed by the endurance of those whom they oppress.” In Ghana, as people resist authoritarian constitutionalism with words, positive action, or both, they are met with incredible opposition, sometimes violence.

One of these resistance movements is #FixTheCountry, a burgeoning nonpartisan group of young Ghanaians who initially mobilized online around the hashtag (created by influencer Kalyjay) to spotlight worsening socioeconomic conditions like dumsor (power cuts), unemployment, poor roads, and corruption. Its demands—including greater democratic accountability, long-term development plans, and similar calls—have set the agenda for mainstream media and garnered national attention; the government organized a press conference in response and held a meeting between top ministers and some supporters of the movement. #FixTheCountry supporters have been loud and unapologetic about their quest for democratic accountability through demonstrations, legal action, right to information requests, community organizing, and other means.

On August 4th of last year, the group organized one of the largest nonpartisan protests in Accra. The police, in typical fashion, secured a court injunction to stop the demonstration, which had been originally planned for May 9th. #FixTheCountry moved the protest online, launching #NameAndShame, a campaign inviting the public to share images of the problems in their community and call out their members of parliament. They also successfully made calls for a new constitution part of the national discourse. The movement also effectively challenged the police crackdown at the Supreme Court of Ghana, where the injunction against the demonstration was successfully quashed. #FixTheCountry has been ardently working to mobilize young people (in Ghana and the diaspora) to believe that change is possible and that there are democratic routes to attain this without fantasizing about so-called dictatorships, strongman governments, or a return to colonial rule—all arguments sometimes proffered by young people. 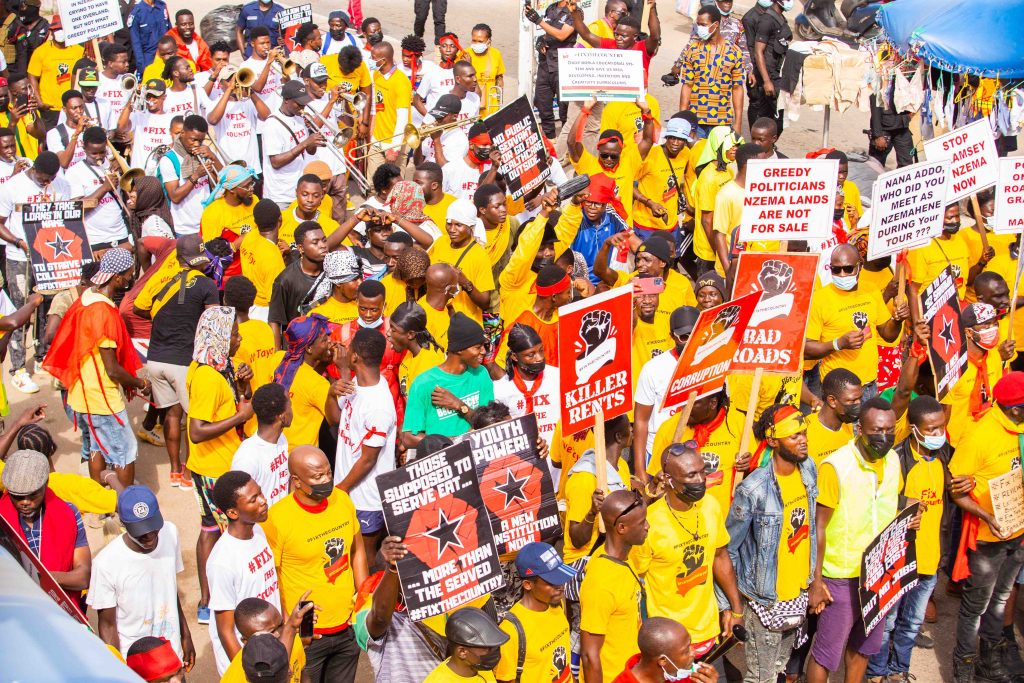 In response, the government has recruited state machinery to persecute and delegitimize the activism of this movement. A recent example is the ongoing political persecution of Oliver Barker-Vormawor, a prominent #FixtheCountry convener and doctoral student of law at the University of Cambridge. In January, Oliver had been part of a group that petitioned President Nana Akufo-Addo to remove the Electoral Commission’s chairperson, Jean Mensa, and her deputies, Dr. Bossman Eric Asare and Samuel Tettey. The commission had prevented residents from Santrokofi, Akpafu, Lolobi, and Likpe, located in an opposition stronghold, from voting in the 2020 elections. A year later, the districts still do not have representation in the hung parliament. The stalemate is perceived as an impediment to the government’s attempt to pass the unpopular Electronic Transfer Bill (E-levy), a regressive tax on electronic transactions like mobile money and e-banking. The bill is intended to be used as collateral for more loans for the already highly indebted country (the proposal is the latest brainchild of Finance Minister Ken Ofori-Atta, cousin of the president and Wall Street veteran).

On February 9th, 2022, Oliver shared a post in reaction to an event some Ghanaians deemed insensitive: the presentation of an E-levy-themed birthday cake to Osei Kyei Mensah Bonsu, leader of the ruling party in parliament. “If this E-Levy passes after this cake bullshit,” Oliver wrote, “I will do the coup myself. Useless Army!” Two days later, on February 11th, 2022, Oliver was arrested at Kotoka International Airport. For over 24 hours, his family members and lawyers could not find him. Then, following a police statement announcing his arrest, supporters of #FixtheCountry visited about 15 police stations trying to locate him. According to Oliver’s account, unidentified men with guns had abducted him around 5 p.m. at the airport when he had landed from the UK. He was then put in a military van and taken to an undisclosed location. There, he was harassed and intimidated after he refused to unlock his phone. Later, around 10 p.m., he was taken to a police station in Ashaiman where he was officially charged with a misdemeanor offense and detained. However, when he appeared in court on February 14th, 2022, he was unexpectedly charged with treason felony—without his lawyers’ prior knowledge. During the early days of his unjust detention, he went on a hunger strike protesting this abuse.

In response to these events, former Attorney General and First Special Prosecutor Martin Amidu has stated that the government has “knowingly and intentionally turned the administration of justice into an inquisitorial and persecutorial system to intimidate and suppress the lawful political activity, personal liberty and right to equality before the law and non-discrimination of a citizen, Mr. Barker-Vormawor.” These actions, he said, violated “articles 3, 14, 17, and 291 of the 1992 Constitution.”

Over the course of Oliver’s arrest and detainment, the police had violated a constitutional injunction that requires “citizens who are arrested, restricted, or detained to be brought before a court within forty-eight hours or be set at liberty.” They deliberately sent him to a district court at Ashaiman that did not have the power to grant bail, and the judge placed him on remand for two weeks. After this, Oliver was sent back to the same court and placed on remand for another two weeks. Each of these court appearances was marked with the presence of several heavily armed police officers, ostensibly from the Formed Police Unit (which has received equipment and training from the US)—an obvious display of state power meant to intimidate political activism. At some point during police custody, Oliver fell sick and was hospitalized.

Oliver’s arrest and unlawful detention for over thirty days represents the height of government-sanctioned political intimidation against the #FixTheCountry movement. Some members of the ruling party, the National Patriotic Party (NPP), have characterized #FixTheCountry supporters as unruly and as agents of the opposition party, the National Democratic Congress (NDC). The NPP and NDC duopoly has long dominated national politics, and their neoliberal perspectives, often amplified by mainstream media, shape how national problems—particularly the economy—are discussed. Another phenomenon prominent in elite media discourse is what I call the “lawyerfication” of national problems: perceiving everything through a narrow legalistic lens. In this approach, legal solutions are proffered while lawyers become foremost experts since every challenge is turned into a legal issue. These lawyers offer a narrow vision of democracy as a set of legal practices and institutions. Therefore, positive action—general strikes, civil disobedience, etc.—is made invisible. In other words, the people are made invisible. But we cannot limit how we struggle simply to a fight over legality. While there are no guaranteed victories for whichever democratic route we pursue, it is in and through the struggle that we come to see ourselves and others as makers of history.

As for Oliver’s persecution, it continues. He appeared before the district court in Ashaiman on March 15th, 2022, but the state prosecutors didn’t bother to show up; as a result, the judge, Eleanor Barnes Botwe, remanded him again for two weeks. The next day, however, he appeared again before the High Court in Tema, where he was granted bail at 2 million Ghanaian cedis (about 284,292 US dollars) with two sureties. In another brazen abuse of power, the crime officer whose job was to assist processes for his bail was nowhere to be found. Oliver thus spent another night in police custody before eventually being released the next day. The movement is using Oliver’s unlawful detention to spotlight the unjust criminal justice system and inhuman conditions in jails; in one action, they attempted to donate food and toiletries to Oliver’s former cellmates in Ashaiman police station, some who went without food sometimes because the state did not provide food for them. However, they were met with heavily armed police officers who prevented them from donating the items. These political abuses of judicial processes reveal how the lawyerfication discourse ignores the operation of power on the ground, conflating legality with justice.

On the African Women’s Development and Communication Network (FEMNET) based in Kenya.